The Story of our Pointer Puppies

We live in lovely Limousin, deep in the heart of the French countryside. We run painting holidays a Bed and Breakfast and holiday cottage from Les Trois Chenes, our traditional stone farmhouse in the hamlet of Videix. We have a few small farm animals including our dog Molly.

As you can see from these stories, we are immensely proud of our intrepid hunting dog! This is the second of our stories from our English Pointers in France series. The first tells of how we came to find and buy our dog, Molly: Molly, An English Pointer Puppy in France, and this is the story of her puppies. I hope you enjoy the pups tale ...

This is Molly, our superb English Pointer before she had her pups. I loved her sleek figure and wonderfully atheletic build but she soon regained both her trim tum and her ability to jump every fence we built to keep her in.

Before she could become a mum, however, we needed to find a suitable mate so started to look around for a beau 'Beau' for our Mo.

The first attempt to find a mate failed. The beautifully liver-coloured dog that belonged to the secretary of Videix mairie didn't appeal to her. I can't blame her, he was way too slobbery. So, on to the second choice.

Our chimney sweep had long been an admirer of Molly and came around regularly to clean our chimney and to propose his dog as a suitable suitor. He came to stay 'on holiday' and eventually managed to win Molly's heart - so to speak. Anyway, whatever the truth of the romance, the business was done and soon the pups were on their way.

Naturally I'm proud of Molly and used this picture to create a poster that you can buy on Zazzle.com It would make a wonderful gift for anyone who loves pointers.

Our pointer puppies are born but tragedy strikes

This time the deed was done and it soon became evident that Molly was a mum-to-be. We took her to the vet for advice and she was deemed to be in good health. We were told that pointers usually give birth without problems, to feed her on puppy food, and to worm her periodically. Off we went home with sack of food and worming tablets.

The time grew near, I got out the books on whelping and pups, and the day soon arrived. Molly was agitated, tearing her bed (more than usual) and didn't want to be left alone at all. And this went on ...and on. One of our Bed and Breakfast guests at the time was a midwife, and my husband was a doctor, so Molly had all the expert help one could hope for - short of the vet. Nothing happened and my husband did actually tell me to phone the vet, and I admit I just hoped all would just go smoothly eventually. We waited until evening, still nothing. I phoned my sister whose dog had had several litters of pups. She assured me that the pups would arrive during the night. Next morning still nothing so we took the poor dog off the the vets. Once there the vet took one look at Molly and whipped her in for an emergency cesaerian, taking time only to chide me for not having acted sooner - as if I did not feel bad enough already! We were sent home and told to phone again that evening. When we called at five, Molly was OK and ready for visitors, we were told. Off we went to visit the patient and were shocked to be told that, upon reflection, they thought that mum and pups should all go home with us there and then!

Molly was a dutiful mother - but no more ...

Snacks in the night - we feared for the puppies' safety!

At first Molly refused to acknowlege the existence of the pups, but at least allowed them to feed. We had to get up regularly through the night to stroke their nether regions to encourage them to 'wee and poo'. We also checked that they were all together and none had wriggled behind their mum. As she recovered a bit from her operation, Molly began to show the minimum amount of interest and do her duty. She fed them and kept them clean. That was it.

Days and nights passed and soon we began to be kept awake at night by terrible snarling (on the part of Molly) and squeeking (on the part of the pups). We were very alarmed. Molly has a lovely temprement and in all the years she had been with us we barely heard a growl, much less a snap, yet here were the most horrific noises coming from the kitchen. Every time we awoke to this drama, several times a night, we expected to see the pups dead, bitten to death by their own mother - but no. This dog's snarl was evidently much worse than her bite and the pups remained alive, but very, very wary. Evidently Molly did not take kindly to having her sleep interrupted.This is one tough mama and it made me look again at the model of motherhood we have had passed down to us. Am I too soft on my son? Would he work harder at school, keep his room tidier and help more around the house if he had his head bitten more often???

Growing up - some cute puppy pictures

All you need to know abnout training pointer puppies

This was the photograph I took to try to sell the pups. Thought it best to get in there early and find some nice people to reserve the pups. It was at this point that I came up against all the regulations the French beaurocrats could throw at a couple of tiny pups - and the regulations were not inconsiderable. This is a new story to be told in full in future articles! Believe me, the French regs around selling puppies definitely needs an article all to itself. For the moment, I will cut it down to two facts. A - I should have had servicing certificates right at the start, and B - I should have checked the dog's pedigree papers with my own eyes because at this point I discovered he didn't have the final, and decisive paper. So - my pups were not pedigree puppies in the eyes of the French state and couldn't be sold as such. This was a real downer and I began to imagine life with three pointers in the house. More sleepless nights.

It soon became evident that the puppies all had very different characters. The boy, the one with the black marking on his body, was the placid one. The one with the black head was the naughty one! She was the first to climb out of her box, the first one to escape from any container and the fastest one, taking any opportunity to get up to mischief in a flash. The other female had brown markings and she was good as gold. This was the puppy I wanted to keep, we called her Cocoline, although the placid male dog would have made the best pet and the fast and feisty black-headed one, (we called her Naughty Susan for obvious reasons) had all the makings of a great Chien du Chasse - or hunting dog.

Some puppy play is sweeter - "Kiss"

The girl pups playing outside

This was the last photograph of the pups together

This was the last picture we took of the pups together. Soon, the owner of the father came for the male puppy we named 'Spot' - I know not very original, but it wasn't to be his "real" name - and then there were two. But the drama was not yet over and more of the story must be saved for The Puppies' Tale! Suffice it to say we all felt a bit sad to see the little chap go, but also relieved as the puppies were becoming more than just a handful. Molly had come around a bit as they grew into teenages and could play her rough games, still didn't have much time for them. As far as she was concerned they were old enough to leave home so she could resume her single life again. See the video below for a good example of their relationship!

Tough love pointer mum: a funny video with a sting in the tail

How to find us 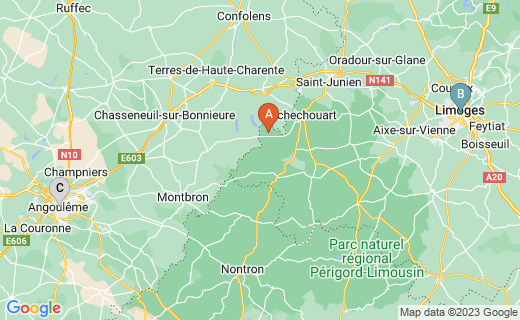 Painting holiday, bed and breakfast, self-catering holiday cottages, situated ten minutes from Rochechouart and we are between Limoges and Angouleme.