Managing Blue-Green Algae in a Freshwater Aquarium: Keeping Unsightly Algae Out of the Fish Tank 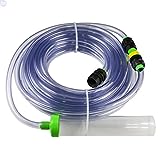 Aquariums can be beautiful additions to your décor and learning how to properly care for the fish can be a very fulfilling and enjoyable task. However, as with any pets fish require routine care including regular water changes. Just like any cat box waste accumulates fast, if your tank is properly cycled you may not actually see any signs of a dirty tank but don't be fooled...a perfectly crystal clear tank can still have lethal levels of nitrates in the water. One sign that your tank may not be maintained properly is an excess of algae, most notably either a brown algae or a slimy type called blue-green algae (though it can be dark green or black). Blue-green algae can be unsightly in your tank and can also be hazardous to the fish inside. Let's begin with a couple of things that do NOT work to get rid of blue-green algae:

Algae-eating fish - Common algae eaters such as plecostomus, otocinclus, and grazers such as goldfish or gouramis will not touch the stuff. Why? It isn't really algae. Blue-green algae is a cyanobacteria that is exceptionally difficult to get rid of once it takes hold but definitely doesn't taste like the "real algaes", or actual plant algae. I have noticed that a lot of my apple snails enjoy munching on the blue-green algae but never do well with completely getting rid of it.

Commercial algae killers - Alright, so there are some times that these products will work to get rid of the algae temporarily because they are very hard on small animals...and thus hard on blue-green algae. Unfortunately they're also very hard on the beneficial bacteria that breaks down the ammonia from the fish's waste into less toxic nitrites and then into even less toxic nitrates. Additionally, many of those products contain copper which will kill invertebrates such as snails and shrimp and isn't very healthy for the fish either. I say "temporarily" get rid of the algae because it won't do any good to kill existing algae without looking at the root of the problem.

So what do we do about it? While it's difficult to get rid of the algae altogether close attention to the tank's maintenance can limit the algae and keep it from reaching harmful levels in your system.

Partial water changes should be done about every week, more or less depending on your tank size and stocking level. Many aquarium books and sources will tell you to keep your nitrate levels at 40ppm or less, I raise snails and cherry shrimp so I always keep my tanks at 20ppm or less (usually less). In order to keep your biological filter intact...that is, to keep enough bacteria in there to break down all the ammonia produced...you should never do more than a 50% water change at one time. I also rarely change the filter on my HOB filters (the ones that hang on the back of the tank, my personal favorite) but instead rinse them out in a bowl of tank water before every partial water change. Note that carbon stays active for about a week but is not needed unless you have to remove medications or odors from the water. How does this help? Limiting the amount of available nitrates will limit the ability of the blue-green algae to re-grow.

To manage that blue-green algae I usually scrape the sides and decorations before doing a gravel vacuum. A thorough vacuum should be done at least every other week to keep all the excess food and waste out of the system.

Having a hard time keeping the nitrates under 20ppm? You may have to up the number of partial water changes, but if you find the parameters are going out of whack within a couple of days of changing the water you may have to take some additional steps to correct the problem in your tank. First, make sure your ammonia and nitrites are 0, if they're not you have bigger problems than blue-green algae and need to focus on getting your tank properly cycled again before continuing your quest to rid it of algae (though sides should still be scraped to keep the algae from reaching dangerous levels).

Next, keep an eye on your fish during feeding time. A fish's metabolism is such that any healthy fish will be pretty much perpetually hungry as they are opportunistic eaters that have adapted to the irregular sources of food in the wild so they should not be fed until they stop eating. Feed your fish the amount they'll eat in approximately two minutes for each feeding...I feed mine three times a day but twice is often sufficient. If you see quite a bit of food that doesn't get eaten or it takes significantly longer than two minutes for the fish to finish it reduce the amount they're fed.

If reducing food levels doesn't solve your nitrate problem do some research on your fish and your filter...is your aquarium overstocked? Bear in mind that larger types of fish such as most of the carnivores and goldfish have large stomachs and produce a lot of waste so they have particular space requirements and need filtration that will turn over the entire volume of aquarium water about ten times every hour (example: a 30G tank should have a filter that turns over 300 gallons every hour).

Finally, while it may be very difficult to get rid of the blue-green algae in your tank it can be quite easy to keep it within acceptable limits as long as you pay attention to the overall health of your tank. If you pay close attention to your water's parameters it is very possible to eradicate the algae or reduce it to levels you'll rarely even see...just keep up on that routine maintenance!