Life Through a Virginia Window

A Slide Show of the photos

I have made a slide show on Youtube of these photos so that you can view the photos full screen in the video. I hope you enjoy them.

When I wrote this hub I had just come back from visiting my daughter and family in Fredericksburg Virginia.

During my stay I became fascinated by the wildlife that I could see through the window that looked out onto the deck and garden (is it called a yard in America?).

I took to looking through the window as I sat and consumed some of the many cups of tea that we English deem necessary to sustain us throughout the day.

This window turned out to be one of the highlights of my holiday, because through it I was able to witness a variety of birds and squirrels going about their business, taking no notice of me or of the ever watchful cats.

I hope through this article to share this delightful time with you and I hope that you will get the same enjoyment that I did as you now peer into my world through the lens of my camera.

Pickle watches with me

My daughter has three cats, one which she brought with her from England and two that she has rescued since coming to live in America.

Each of these cats took a turn staring through the window with me though for very different reasons I suspect.

The first to join me on watch was the youngest cat Pickle he is a handsome cat and I think that he knows it. 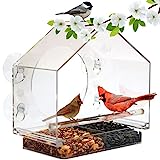 Now right up front I am going to tell you the truth before you find it out for yourselves, I know nothing at all about birds, that’s right nothing nada.

However, I have made a stab at identifying the ones on the photographs that you will see on this hub.

If I have got any wrong then please help me out by dropping me a line and putting me right.

The first bird that caught my attention was the Blue Jay its beautiful colouration is very eyecatching and I am pretty confident that I have identified this one correctly.

I took all my photographs with a fairly high zoom so as to get as close up and detailed a photograph as possible.

Unfortunately I took the photographs without the aid of my tripod because I didn't bring it with me. Because of this some of the photos are not as crisp and clean as I would like them to be and so they don’t do the birds justice but I think you will get some enjoyment from looking at them anyway.

In a lighthearted way, I have tried to get inside the heads of the wildlife out side, and the cats inside, as each photograph was taken. You will see what I thought they might be thinking written underneath each photograph.

If you think of something better then I would love to hear please post it in my comments below so we can enjoy it too.

Snow arrives on the deck

A few days after we arrived Fredericksburg was in the grip of one of its worst snow storms in more than a  decade and we had eighteen inches of snow fall in about a twelve  hour period. 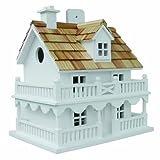 My daughter is a bit of a softy when it comes to birds and animals and even in the good weather a bird can find food and lodgings in her back yard.

When the snow came the first thing she did was to open the window I look through and throw handfuls of seed onto the snow topped table, her husband able to throw further managed to get some as far as the fence rail surrounding the deck.

While the snow was piled up high we didn’t see any wildlife near the deck, but when the snow melted it left a layer of bird seed on the table, deck and fence rail that drew all sorts of hungry critters. The Blue Jay above is eating seed from the fence rail that is round the deck.

Freak watches with me

The next to join me at the window is Freak the other rescue cat, she is a very loving cat and loves to be stroked, unlike Pickle who is very distrustful of most people.

When my daughter brought the young sickly and neglected Pickle home he was just a kitten.

Freaky adopted him and cared for him like her own kitten but as she gazes at the birds I don't think that it is adoption that is on her mind at the moment.

As freak and I made ourselves comfortable at the window it seemed like a whole flock of Brown-headed Cowbirds swooped down out of the sky.

The arrival of these birds on the deck en masse frightened all the other birds away. Initially there was quite a feeding frenzy going on, the female bird in the middle of the second photograph seemed unable to keep her eyes off Freak who was peering intently at them through the window.

Keep the noise down

There were dozens of these Brown-headed Cowbirds and you could see from Freak’s pose that she was just itching to get out there among them and sort them out for daring to land on her deck.

Freak was not the only one who was put out by their noisy arrival, the sparrow who lived in the birdhouse on the deck was not too pleased either. As he stands one foot on the perch outside his own front door he seemed to be saying ‘Keep the noise down’ well that’s what it looks like to me.

Who is making all that noise outside my house?

The Brown-headed Cowbirds departed just as they arrived en masse, one moment they were there the next it was like someone had thrown a hidden switch somewhere that said time’s up and off they went.

Once the coast was clear other birds started to come back in dribs and drabs, the closest I could find to the birds in these photographs were the Dark-eyed Junco but I could just as easily be wrong about that, if you know different please let me know.

Freak soon got bored with the dribs and drabs and soon after the Brown-Headed Cowbirds had left Freak got up and left too.

Zuzu is the cat that came to America from Newcastle with my daughter. My daughter has had Zuzu from a tiny kitten and there was no way she was going to leave her behind, even though you could have flown a family of four out to the States for the cost of the cat's flight.

Now Newcastle cats are tough cats and you wouldn’t want to mess with one, you are just as likely to get a growl and the swish of the tail from Zuzu as you would a purr, it all depends on her mood.

Try to move her when she doesn’t want to be moved and you wouldn’t believe how much noise comes out of this little cat with the big attitude.

Upset her and she hisses growls and takes swipes at you with her opened clawed paw and she has even been known to bite. As I said Newcastle cats are hard and tough.

I first saw the squirrel jumping from tree to tree in the yard and the speed with which he moved I doubt that Zuzu could catch him if she tried.

Slowly but surely this squirrel edged closer and closer to the deck area until he was in the tree nearest to the deck. He is a very pretty squirrel I think but I know many people consider these animals pesky critters even vermin, I have heard the term tree rats used to describe them, but they have a safe haven here in Sally’s yard.

Then there were two cats watching

Zuzu was busy intently watching through the glass door every move that the squirrel made when Pickle wandered up to see what she was looking at.

Pickle soon located what was holding Zuzu’s gaze and with a swift bound he turned and jumped to his favourite spot on the chair by the window so that he could also watch.

Zuzu after all is not a cat who wants to share her viewing place or anything else with others.

Both cats watched fascinated as the squirrel finally jumped down off the tree onto the deck fence rail.

You could almost hear their little minds whirring with the plans of what they would do to that poor squirrel if only they could get outside.

That of course was not going to happen anytime soon, at least not while Sally was around to ensure the safety of the wildlife that ate on her deck.

Who is afraid of the two cats?

Who is afraid of the two cats watching through the window? One thing is for sure it certainly wasn’t this squirrel.

The squirrel was definitely aware of the two cats following his every move but he didn’t seem at all fazed by this.

In fact he was so unfazed that in full view of both cats, he jumped down off the rail onto the deck and took up a boxing stance which seemed to say,  come on then if you want a fight then I’ll give you one.

Just me and the Sparrows

After the challenging posturing of the squirrel the cats seemed to lose interest and they both wandered off leaving me and my camera all alone with the sparrows, at least I think they are sparrows.

I hope that you have enjoyed this little peek through a window in Virginia; by the way you don’t think that squirrel frightened the cats do you?

As winter approaches, I am looking forward to when I shall take up my place at this window once again, hopefully my view will be as exciting and varied as it was this time. I now have a new camera, and hope that I will be able to capture even better shots with it than I have here. When I do I will post some of them on this post, for you to enjoy.