Should I Let My Indoor Cat Outdoors?

I am a cat person (well, actually I love ALL animals, including cats) and have been all my life. As a little girl, I had four cats: all of whom were let outdoors whenever they pleased. We lived on a large wooded property in Ohio and these cats loved to hunt, play and explore outside during the day and they usually came in at night. All four lived to be at least 10 years old.

My family moved to Colorado when I was a teenager and there we aquired a few more cats. I can't say for sure how many because they kept disappearing before we had had them very long. We finally got smart and decided the next cats we got would be indoor only. My mother, who is also a huge animal lover, got 2 Siamese kittens which lived to be 22 years old! I kid you not, these cats really had nine lives and some. However, these cats were totally nuts . They would walk around my mother's house wailing and screeching until someone would come to pick them up. And I don't mean just in their later years, they were always like that. (They were "fixed," if you are wondering.) Why did they act like that? Was it a sign of unhappiness, boredom, malcontent? I guess we'll never really know.

Good Reasons Not to Let Your Cat Out

In my twenties I lived in Boston. I decided to adopt a cat from a Salem animal shelter (yes, it was a black cat.) This particular shelter made prospective cat adopters sign a form promising to keep their newly adopted cat indoors. They also gave a brief sermon and a brochure explaining all the reasons that cats should never be let out. These reasons included:

1.) Your cat will live longer because:

2.) Your cat will kill songbirds and other small but lovely creatures.

3.) Un-fixed cats can make more homeless cats that will end up in overcrowded shelters.

4.) There is no need for expensive treatments for fleas, ticks, parasites etc. if your cat never goes outside.

By the time I left that shelter, with my new black cat, I was well and fully brainwashed. I was convinced that letting that cat out would be equal to murder. Furthermore, anybody who did let their cat out needed to be converted to the ways of us responsible pet owners.

Jack lived for 14 years. I good long life for a cat and proof positive that keeping him indoors had been the right thing to do, right? Well, I'm not so sure. After a few years, Jack started just wandering around meowing for no apparent reason. He was always trying to get out, even after 14 years, and he would sit in the window yowling to get out. The meowing got worse and worse with the passing years until he seemed every bit as cuckoo as my mother's old Siamese. I'm surprised that my husband, a hard working and sometimes sleep deprived man, did not just throw that poor beast out once and for all. Jack was also never one to purr and just generally seemed forlorn. If an animal were really really miserable, how would they try to express this to you? It seemed to me that Jack was trying to do just that.

Hmmm, maybe I should try one of these... 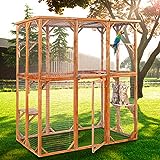 Now I have a new cat. My family and I chose him from the local humane society where he lived the first year of his life. He is a very happy, fat, orange cat but he is already making it clear that he would love to go outside.

My husband is all for letting him out and I can see why. While it is true that a cat will surely live longer if it is never allowed out, I'm no longer certain that this is what is best for the cat. Perhaps it is a question of quality and not quantity. Imagine living your whole life staring at the same four walls, never feeling the sun on your face. You too would probably live longer if you never left your home, assuming of course that there was someone bringing you bags of vittles. There would be no threat of getting injured in an auto or some other type of accident. You wouldn't have to worry about getting sick or mugged or lost. You would be perfectly safe from mean people or unfriendly animals. But you might be bored to death.