Though he can appear as regal as a lion, Mendicino is usually the one of my cats that I know I can find usually looking a bit like a buffoon.

Sprawled across the couch, lying on his back under my desk, or lying atop one of the other cats in an effort to make them move off the spot he has to have, Mendi is lord and liege of sleepy-time.

Mendicino was born at my house.

We got his mom, Alissandra from a lady who didn't want to deal with her anymore and wanted her gone right away. Apparently she bit the woman's daughter whenever she tried to play with her, and she was also pregnant. She had four kittens:

Alpine, a female long-haired dilute tortoiseshell (who we no longer have)

Trinity, a female long-haired grey tabby (who we no longer have)

Mendi and Trini with their Mama

All Part of One Big Adopted Family

His Horoscope Sign: Mendi is very definitely a Leo/Lion

Likes: The attention of everyone

Chatting on the Phone

Best Habit: Being gentle with just about everyone and everything

Naughtiest Habit: Being very pushy about anything he wants

Likes To Eat: Everything

Scared Of: Going without attention for five minutes

Best Trick: Finding some way to get into the spot he wants, no matter who is already there

Can't Live Without: The love and devotion of everyone

Mendi's Motto: If you aren't paying attention to me, you're obviously just wasting time

Mendi adores the turbo track! All of the cats love it, but Mendi especially loves it.

It is basically a ball in a plastic chute. The cats hit the ball, sending it flying around, then whack it the other direction. More than one cat can play with it, and I've had up to five gathered around it at once watching the ball fly and sneaking in paws to hit it.

Since the ball is in the chute, it can't end up disappearing under the refrigerator or sofa like most of the toys do. 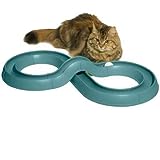 Mendi really liked our house chicken. He would always try to cuddle with her and give Sweet Tweets kisses.

People frequently comment on Mendi's name. It is a bit unusual, but then he isn't exactly normal.

His full name is Mendicino, but that's a mouthful, so I usually call him Mendi. I usually name my cats for themes, and for the last few years I've have been naming the animals, though mostly just the cats, after counties in California.

Before the California counties it was fairy tales, but I happened to be in a California history class, a California geography class, and a California geology class all at once and kept realizing I didn't know even half of California's 58 counties and thought this might be a handy way to learn the counties as well as end up with some fun and unusual kitty names, plus I already had a puppy named Mojave. It gave me a big list of names to choose from.

I chose Mendocino county for Mendi since he had pretty light brown stripes on his orange fur, which reminded me of Mehndi, a form of temporary tattoo in India and Africa using that uses henna, an orange-brown dye.

Mendicino has never had a second of self-doubt.

He spends his days absolutely sure that everyone around him wants to take care of him and give him love. He picks this up from Alissandra I believe. If he sees one of the cats bathing another, he shoves himself in the middle so that they both start giving him a bath.

If I'm asleep, often he will come up and bite the bridge of my nose until I wake up, so that I can pet him. He picks the best places to sleep and simply lays on anyone in his way. He is a sweetheart and puts up with the kittens climbing on him and trying to nurse from him, he really is good natured, he just doesn't seem to realize that there are others things in the world besides him. He thinks he's a kitten that we should all take care of.

Mendi is super lazy and spends most of his days sleeping, usually snuggled up to someone or something since he's very clingy. Other than that his little idiosyncrasies, he's basically just a laid-back male cat who watches everything with a sleepy-eyed gaze.

To me, the cat in the Simon's Cat video "Cat Man Do" could easily be Mendicino, except he wouldn't want food so much as getting pet and having all the attention on him.

He frequently lays on my chest in the morning, staring into my face...waiting for any sign of life. If he doesn't get it within a reasonable length of time, he pats my face, licks my face, then moves on to biting the bridge of my nose. If that still doesn't get the results he wants, he simply nips again, slightly harder this time, then again, and again until he wakes my butt up and I can give him the devotion he crazes.

I have woken up pretty suddenly a few times, feeling a sense of impending doom, I would not be at all surprised if I had just narrowly escaped getting whacked.

Are You Awake Yet?

Yes, I know cats are well-known for sleeping quite a bit, but Mendi is the only one of my cats that sleeps almost constantly.

He is usually either sleeping, lying half-asleep and watching everything, or releasing sudden bursts of speed.

There is no in-between with Mendi, he is usually all or nothing.

Big Boy Mendi on the Bed

Mendi Tired After Making a Mess

Sleeping on my Pillow

Mendi on I Can Has Cheezburger

You may have seen Mendicino on I Can Has Cheezburger in June, 2009 in this picture where he is in a pizza box.

Playing on the Cat Tree

If Mendi and the other cats aren't hanging out on my desk, they're usually checking things out from up on the cat tree.

A cat tree doesn't even make it all the way through the door before a couple jump on it and another starts testing his claws.

Mendi is so laid back, he's usually not on the top-most perch of the cat tree, but usually on the middle one pushing someone over the edge as he tries to force them to give him kisses. 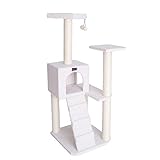