No, No, Don't Scratch the Couch!

Tips to keep your cat from scratching where they shouldn't!

"No, no, don't scratch the couch!" Sound familiar? You have probably said this to your cat, or cats, as many times as I have! Unfortunately, cats like to scratch. It is a natural instinct for them and I almost feel guilty telling them not to. However, I don't want my house shredded, so I came up with some ways to curb this behavior. Here are the ones that have worked for me.

Remember those little metal toys that clicked when you pressed them? I will have some shown under the amazon section at the end of the article. I have found these to be great training tools. When your cat starts scratching on something he shouldn't be, get fairly close and start clicking the toy, while telling him, no, no scratching. Most cats hate the sound of these toys and will immediately take off. They are cheap and easy to use. You can hold one in your hand and the cat won't even know where it's coming from. Just keep repeating this until he gets the message...if I scratch on the couch, I will hear that annoying noise!

If you go to a home improvement store, like Home Depot or Lowe's, you can get thick plastic runners that have little nubs on them. They are generally used to protect carpets, I believe. Cats hate the feeling of those little nubs on their feet. If your cat is scratching in one particular place, put a piece of this (make sure the nub side is up) down and they won't get on it. This is especially helpful for areas of the rug they want to scratch, but can be used anywhere.

I have used this to keep them off counters, but it would work on couches and chairs also. Just lay a big piece of foil over the area and they will avoid it. Again, cats hate foil. Mine run every time I even get a piece out when I'm cooking dinner! Just the sound of it being pulled out of the box sends them scampering. They don't like to walk on it either.

MATERIALS THAT ARE SLICK

When it comes to furniture, try to buy something with a slick type material, as opposed to sturdy, heavier materials. When I first heard about this, I didn't believe it, but when we bought a new couch and purposely bought a slicker material, it worked. The cats don't scratch it. I think part of it is that they can't really get a hold on it. It may make you change your style a bit, but having a couch that isn't shredded is worth it.

Of course a good scratching post is ideal too. Be sure you get one that is made of sisal instead of carpet. Cats love sisal and will probably prefer to scratch on that instead of something else. Something that was pointed out years ago to me was that scratching posts had carpet on them (this was before the ones with sisal came out) and then when they scratched the carpeting on the floors we get upset. How were they suppose to know the difference? Luckily the sisal scratching posts came along!

ROCKS IN YOUR PLANTS

This is more about digging in your houseplants than scratching, but I thought I 'd throw it in. Get some fairly large sized rocks (again, Lowe's or Home Depot in the gardening section) and add a layer to the top of the soil. Make sure they are big enough so, if they dig one out, they can't swallow it. They actually look pretty and you can water your plants without removing them.

Now, you may have one of the rare cats that none of these tricks will work on, but they have worked well for me and I hope they work for you. I've found yelling at them doesn't work and I hate to do that anyway (yes, I'm a big pushover for them!), so it is better to just trick, uh, I mean train...them into not wanting to scratch. Cats are very clever and we just have to be more clever! Good luck with these tips. 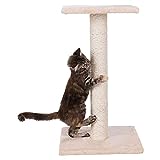