Are you a cat person or a dog person?

Cats became domesticated for very different reasons than dogs. Their desire to form an alliance with humans stemmed from mutual benefit. We provided an easy source of food and they became our exterminators. Even today, our three felines are terrific mousers, keeping the mouse populations down to a bare minimum in our very old century farmhouse. Although they provide love, affection and entertainment to us on their terms only, they still have not lost the hunting prowess of their ancient forebearers.

There is something to the famous line, "Dogs come when they're called; cats take a message and get back to you later." - Mary Bly

I believe there is some truth to the belief that cats domesticated the human race as opposed to the other way around. My three sons were each able to adopt a cat (never ever take three boys and try to come home with only two kittens!). My oldest son chose Arwen, Jarod my middle son picked Tsunami and my youngest chose the only male, Winston. Little did we know that within the year, the cats decided themselves to whom they showed their allegiance. Winston decided that the young boy who chose him was a wise companion to keep. Arwen and Tsunami on the other hand did not remain true. To this day, Arwen prefers to sleep with Jarod. Jarod was the person she adopted while Tsunami adopted Connor as her favourite companion. Our two dogs treat everyone in the house as part of their pack and constantly crave our attention. The three cats on the other hand come to us when they need water or food or perhaps to get their head rubbed. At night, if Tsunami cannot find Connor to sleep with, we all hear her wailing and suffer the consequences.

"Thou art the Great Cat, the avenger of the Gods, and the judge of words, and the president of the sovereign chiefs and the governor of the holy Circle; thou art indeed...the Great Cat." - Inscription on the Royal Tombs at Thebes

The Cat in History

Initially, it was thought that the Egyptians first domesticated the cat around 2000 to 1900 BC.

Peoples of the Far East treasured cats due to the protection they provided to treasured manuscripts from rodents.

"The cat has always been associated with the moon. Like the moon it comes to life at night, escaping from humanity and wandering over housetops with its eyes beaming out through the darkness." - Patricia Dale-Green 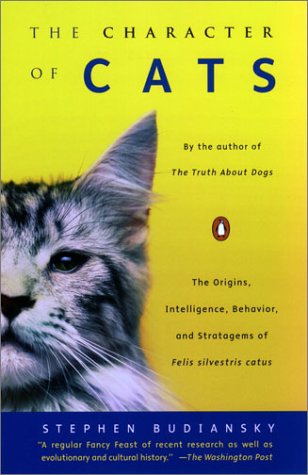 The Character of Cats: The Origins, Intelligence, Behavior, and Stratagems of Felis silvestris catus
Buy Now

In the Middle Ages, cats seemed to lose their status as revered and became instead demonized in Europe at least.

"I think all cats are wild. They only act tame if there's a saucer of milk in it for them." - Douglas Adams, discussing feral cats in Last Chance to See (1991)

Theory Proposing the Origin of Cats

Dogs were useful to humans when they were hunter-gatherers which explains why their domestication preceeds that of cats. Cats became useful to mankind at the dawn of agricultural civilization, in the Fertile Crescent, when humans remained in one place for long periods of time and tilled the earth to lay down stores of surplus food. Stored food led to rodents being attracted to these storehouses. Naturally, felines were attracted to the abundance of easy prey and humans would have been grateful for the pest control.

Evolution of the Domestic Cat

Archaeologists have recently discovered the oldest evidence of cat domestication.

It has now been determined from genetic studies that all domestic cats are descended from the Middle Eastern wildcat, Felis sylvestris, meaning 'cat of the woods'. 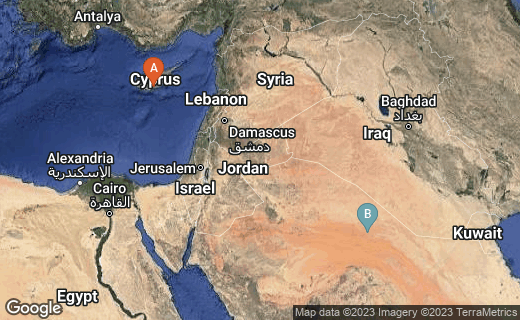 Site of the late stone age village of Shillourokambos on Cyprus where the oldest known domesticated cat remains were found.

Place of origin of wildcat ancestor of the domestic cat.

My boys must subconsciously love the mythology of the black cat as lovers of anything frightful! The black cat still has somewhat of a demonic reputation today. Almost never do you see a witch or wizard surrounded by a faithful dog but always present in all witch stories is the companion feline. And many frightening tales have a demonic cat! And yet, the cat is the most popular pet on earth. In houses or apartments they are self-sufficient and cuddly often enough. Their low maintenance makes them ideal for many lifestyles. Throughout history, they have been revered and in many households they are still prized for their independence and grace and for their excellent predatory skill evidence of a wild side still retained from their ancient feline ancestors.