My cats love toys, but not necessarily what I would think of as toys.  Bottlecaps, milk rings, and wadded up receipts are the favorites in this household.  So, when I wanted to get them a new toy, I had a problem.  Should I give them something I know they'll play with, or try out something from the store?

When I saw the Kong Hugga Wubba, my first thought was, "Oh, great, an octopus!"  My cats love anything with "feathers", real or imaginary, so I knew they would like the "tails" of this odd-shaped thing.  Picking it up, I saw it was the right size to be used as a kicking toy by my kitten.  It has catnip, so I knew our oldest cat would go up to it.  She usually ignores toys, except if they are catnip-scented.

So, wubba in hand, I went home.  As soon as I set down the bag, the cats knew I'd gotten them a new toy.  Carbon went headfirst into the bag, carrying the hugga wubba out by its card.  They were playing with it before I even was able to cut it from the package!  Once it was free, I had 6 pairs of eyes staring up at me, wondering where I was going to throw it.  Toss, and they were off!

That was three months ago, and they will routinely drag the hugga wubba from its hiding place under the couch to play with it.  They love it so much, I got another one as well.  They fight with it, roll around in catnip heaven, tug on the "tails", and attack each other for the right to play with it.  I definitely recommend this to anyone who's got cats.

Cat playing with a hugga wubba 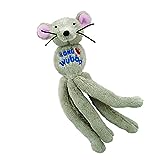