We all know that parrots and certain other birds can learn to talk. And most of us are aware that the Great Apes, i.e., chimpanzees, gorillas and orangutans, can be taught to communicate in American sign language. But have you ever heard of a talking elephant?

I recently discovered an extraordinary story of an Asian elephant called Batyr. Born in 1969, Batyr was a lifelong resident of the Karaganda Zoo in Kazakhstan. According to Wikipedia, Batyr was separated from his mother early on, and was the sole elephant in the Karaganda zoo. He never saw or interacted with other elephants. His only companions were his caretakers at the zoo. Elephants are very social animals, so it is only natural that Batyr identified with and imitated his human associates.

No one set about to teach Batyr to talk. By all acounts, he taught himself. In fact, his unique ability was first discovered by a night watchman at the zoo. The startled man reported he had heard the elephant talking to himself. (the Daily Telegraph Newspaper, April 9,1980) Batyr is said to have had a vocabulary of about 20 words and phrases in the Russian and Kazakh languages. He talked to his attendants or to himself, but his speech was frequently witnessed by amazed zoo visitors. Translated into English, his vocabulary included his name (Batyr), "water," "good," "bad," "go," "the fool," "yes," "give," "grandma," and "penis". Phrases included, "I'm Batyr," "Good Batyr," "Bad Batyr," "Batyr is hungry," "One, two, three," and "F*** you".

Not surprisingly, Batyr's astounding purported linguistic abilities caught the attention of the scientific community. The Soviet scientist A. N. Pogrebnoj-Aleksandroff studied Batyr and made audiovisual recordings of him speaking. Dr. Pogrebnoj-Aleksandroff described how Batyr produced human speech by pressing the tip of his trunk against the bottom of his jaw (simulating lips) and also using his tongue. Batyr was the subject of various scientific articles and zoological conferences in the 1980s and '90's. These were primarily, if not exclusively, in Russia and former Soviet states.

Sadly, Batyr suffered an untimely death in 1993 when his caretakers gave him an accidental overdose of medication. It seems a shame that Batyr was and is so little known and little appreciated in the United States. I suppose it can be attributed to a combination of language, cultural, and political barriers. There is also much skepticism and ongoing controversy in the scientific community where issues of animal language and animal intelligence are concerned. It is hard to fathom why so many scientists, as well as nonscientists, are threatened by evidence of animal intelligence on a level comparable to a human pre-schooler. Is anyone afraid that pre-schoolers will take over the world?

Batyr was only about 24 years old when he died--a young adult who had so much promise. I can just imagine the delightful fellow frolicking happily in elephant heaven, blowing water out his trunk, and uttering the occasional gleeful "I'm Batyr, good Batyr, one, two, three, f*** you!"

Kosik is Alive and Talking!

Kosik is an Asian elephant at the Everland theme park and zoo in Seoul, South Korea. Like his predecessor, Batyr, he reportedly taught himelf to speak (Korean) by imitating his caretakers. He uses the same trunk-in-mouth method to produce human-like speech. And hIs ability to speak was discovered in the same way. Zoo workers outside his enclosure heard him talking to himself, initially thinking a person was in the enclosure.  (See Science Magazine, 6 Oct. 2006 at sciencemag.org, and Wikipedia article, "Kosik".)

Kosik's vocabulary is said to include about eight words and phrases. Among these are "Yes," "No," "foot," "good," "Sit,"and "Lie down". At the time of the videotaped newscast (Youtube video above) in 2006, a zoo spokesperson indicated plans were in the works for scientists to study Kosik's vocalizations to determine if he understood the word meanings or was simply mimicking. Is this not a ridiculous issue? It is obvious he is repeating verbal commands used by his keepers. Dogs understand the same commands. They demonstrate their understanding by obeying the commands, as do elephants. It would be far more interesting and useful to have a speech and language therapist work with Kosik to see how much his vocabulary and expressive speech could be expanded through training. For that matter, why not experiment with training other elephants, both Asian and African, to speak?

I think most people these days have heard of elephants that paint.  It is a wide-spread and well-known phenomenon.  I suppose it is easier to teach an elephant to paint than to talk. But that does not explain the near-silence in the Western media on the subject of talking elephants. Where are the television documentaries and news segments?  If the elephant does not speak our language, does it not count? 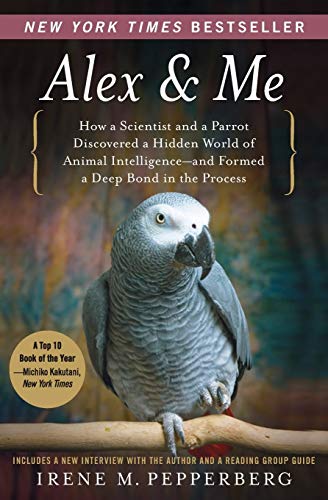 Alex & Me: How a Scientist and a Parrot Discovered a Hidden World of Animal Intelligence--and Formed a Deep Bond in the Process
Buy Now