Everyone knows the intelligence of chimps, elephants, and dolphins, but few know that birds have some standouts, especially the crow. Crows are amazingly adaptive, and have survived along with humans, even using us to their advantage in some circumstances (more on that later). Crows form family units, or social networks if you will.

Photo: Dave Irving has some amazing pictures of birds, insects, and animals

An elephant might never forget, but a crow will tell all his crow friends.

In one study, crows not only recognized faces of people, but were also to spread the knowledge of dangerous humans to other crows.

In a University of Washington study, researches captured crows wearing a specific "dangerous" mask. These crows were tagged and released. It was later found that anyone wearing the mask would be scolded by the crows captured later. The crows remembered the incident and were cawing at the researchers wearing the mask.

But there is more! Crows that were not captured would also scold the researchers. They had witnessed the event and were also angered by the researchers actions.

The most interesting thing of all, is that young crows, that weren't even alive at the time of initial capture, would also scold the researchers. They had somehow learned to recognize the mask. It would be like you hating the bully that gave your dad a wedgie in elementary school. They are able to communicate with each other, able to convey complex ideas and descriptions of people.

Here is an interesting video by the same researchers

Crows make and use tools

The New Caledonian crow is unique, even among crows. New Caledonians have an amazing ability to both use and even make tools. They are commonly seen using sticks to pry insects out from hiding spots.

One study of two crows showed that they could adapt to obstacles to food. The two crows were placed in separate cages and both given a length of wire. One was curved, like a hook, the other straight.

The crow with the hooked wire was able to fish out some food out that he was otherwise unable to reach. The second crow watched the first bird's success and meal. She looked at her not-at-all hooked wire and proceeded to bend it into the proper shape, and was able to also enjoy a meal. They are able to observe, learn through that observation, and adapt to a wide variety of situations.

This puts them in the same league of tool use as chimps and humans.

In the video below, crows are seen dropping nuts in front of cars, so that they run over and break open the shell. The crow can then collect the meaty center.

Crows can talk to each other

Crows make calls, and each one means something. Crows make a beware or "alert" calls when danger is nearby. More interesting than that, crows have a dialect, similar to how humans have accents.

The alert call in one location is different than that of another location. Crows also call in rhythms, usually when crows are arriving or leaving. The exact language of crows is not very well understood, but I think there is a lot to it!

Crows Plan, use trickery and deceit

Two crows Munin and Hugin were being studied by Thomas Bugnyar. Dr. Bugnyar would place out sealed film containers with food inside. Hugin, the smaller crow, was much better at finding these containers than the larger Munin. Munin would quickly arrive and steal the food from Hugin. Hugin figured out a way to trick Munin. He would open an empty film container and start making noise, and pretend to eat from the empty container. Munin would arrive and try to steal the non-existent food, while Hugin would find a different container and feast! 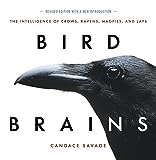 Check out this amazing video of a crow sliding down a roof, almost like he is snowboarding.

Initially, you think maybe something just came loose, but then the crow picks up his board and flies back up to the top to do it again!

Most animals simply exist to eat and reproduce. But many crow species show a level of intelligence way beyond that.