Solutions to Unwanted Dogs in Shelters 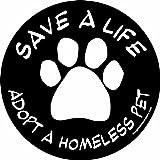 A fellow hubber asked, "What is the solution to unwanted pets in shelters?" Here is my answer, as concisely as possible.

Definitely, spaying and neutering are an important part of keeping animals out of shelters. Breeding education is the next step -- there are WAY too many backyard breeders out there, and some don't even know they're not being responsible. If you're only breeding to give your dog the experience of motherhood or because the puppies would be cute, do yourself and the dogs a favor. DON'T. Not if you're not willing to do genetic testing, vaccinations, home checks, and potentially keep every single one of those puppies for its entire lifespan.

The vast majority of dogs in shelters are 10-24 months old. Why? Because that's the point where new owners realize that puppies are a lot of work, and any work you don't do when they're tiny becomes more important and more difficult with time.

Educate Yourself Before Getting a Pet

People need to be more willing to learn about the type of animal they're getting before they get one. It's absolutely sickening to see people looking for "a puppy." I ask about size, activity level, kids and other pets in the house, and the answer is often, "Oh, that doesn't really matter, just a puppy." It DOES matter -- a Chihuahua bears almost no resemblance in temperament and needs to an Australian Shepherd. I've linked my article on choosing a dog for your family below this hub, which may help you examine useful questions before picking a new pet.

Let the Public Know the Consequences

Make euthanasia numbers more public. A shelter near here puts down twice as many dogs as they adopt out every year, and three times as many cats. Of those, less than 1% were for health or behavior issues. That's in small-town Wyoming; if you really want to see some sad figures, look at a shelter in a big city. Those animals may get 24-72 hours before death, and God help them if they come in right before closing time on a weekend.

The Problem in Animal Shelters

One recurring theme I've seen when promoting shelter pets is that people think they are there because there's something wrong with them. Yes, there are some previously abused basket cases, but it's not all of them -- it's not even the majority. They all need training, but that's ANY dog, not just shelter dogs. Most are there because their owners realized they weren't ready for the responsibility, or they moved, or got allergies. In my local shelter, two senior litter mates are there because their owner went to prison, but the dogs themselves are beautifully behaved and sweet-tempered.

It's also important to never pick a dog by what it looks like in the kennel. The most human-centric dogs in the shelter are also the most prone to going "kennel crazy." These dogs will bark incessantly and spin or jump constantly in the kennel. Get them out and interact with them for a few minutes, and you're suddenly seeing an entirely different dog. In a home where they have a bit of freedom and are comfortably mingled with humans, they may be living rugs or couch potatoes.

Finally, remember that it takes a dog about two weeks to bond with a new human. If the dog doesn't respond to you at the shelter, that's perfectly normal. He or she doesn't know you. If some stranger off the street just started trying to buddy up to you, you probably wouldn't respond either. They'll also take at least as long to settle into a new home and learn the rules, so take it slow and give them a chance.

Promote training and dog-related activities, while also stressing the importance of obedience training. I've written tons of hubs on this, and have linked some below. People need to understand that dogs are still puppies for at least two years, more for some breeds. They need interaction and LOTS of obedience training.

I spend a lot of time promoting canine athletics for high-energy dogs. The average home does not have enough activity for a Husky or a Heeler, for instance, and putting them outside in the yard is not giving them the stimulation they need. My own Catahoula is trained to a bike, because running all over town for an hour a day is really all that offers enough exercise. Athletics can help strengthen the bond with your pet, and offer lots of fun for both of you. Ask anyone who works with high-energy dogs, and they'll tell you that a tired dog is a good dog.

It's so important to assess your own dog experience, and then select the breed accordingly. If you picked a breed just because it's cute, then you're not ready for a dog.

It's sad to say in our information-rich society, but there are still people who don't know the plight of shelter animals, or simply don't think of them when it's time to get a new pet. Still others know that animals are euthanized in shelters, but think that it's only the old, sick, or antisocial. By getting the word out that there are wonderful animals needing homes in every single community in the country, you may be saving a life.

A common perception is that you can't help if you can't adopt right now. Nothing could be further from the truth. Even if all you have is a half-hour a week to walk a dog or pet a cat at a local shelter or rescue, you are making a difference. Can't commit an entire 15 years for a dog, or 20 for a cat? Ask about fostering, and take care of those animals in your home only as long as you can. Animals in foster homes are rarely euthanized, especially if fosters can keep them until they find a forever home.

What do you think? Please leave a comment below stating what you think is the single most important element to reducing the numbers of homeless and unwanted pets.

One City's Stray Dog Problems (virtually every city has one)