The shoreline of Puget Sound in Tacoma, WA is the perfect backdrop for Point Defiance Zoo and Aquarium. Wildlife conservation projects are a major part of the Zoo and Aquariums mission as a new exhibit has been made for Red Wolves to help them save from extinction.

Sumatran Tigers live in the Asian Forest Sanctuary at the zoo which has a small waterfall flowing into a large natural pond area. The tigers run, play and rest in the long green grass or sit by the pond watching the ducks. They have plenty of trees and brush for cover if they want more a place away from the crowds who come to see them.

We watched them for quite awhile as they wrestled and rolled around like big kittens. One of tigers took a serious interest in a duck swimming in the pond. They starred at one another for a long time and eventually the tiger growled at the duck as it slowly swam away.

The population of the Sumatran tigers is declining rapidly due to continued poaching for tiger parts despite laws against it, and the loss of natural habitat because of growing agriculture. They are listed as a critically endangered species as only 500-600 Sumatran Tigers remain in the wild. They are normally found on the Indonesian island of Sumatra off the Malaysian Peninsula. They can be found in the mountain forests, tropical rain forests and swampy areas.

This beautiful peacock was just walking down the sidewalk when we spotted it. It's blue and green neon feathers shimmered in the sunlight as it strutted past us.

My grandson showed off his Mohawk haircut and the Peacock did a little turn and displayed his fine feathers. Equally impressed we went our separate ways.

The Sea Otter is such a fun animal to watch because it moves so easily on the surface of the water. They give the appearance of lying on a sandy beach while they float easily on their backs. They are also known to eat, sleep, hunt and give birth in the water.

Hunted to the point of near extinction the Sea Otter is considered a threatened species protected now by the law. For ways to help Sea Otters go to www.defenders.org.

Harbor Seals were gliding effortlessly through the water as we watched on the opposite side of the glass. The seals seemed to enjoy showing us what they could do in the water. They'd swim straight at us upside down and quickly turn in the other direction.

The seals are protected from being hunted but have other hazards to contend with such as getting tangled in fishing gear, swimming through chemicals, oil spills, and being harassed by humans when they try to rest on the shore.

Point Defiance Zoo & Aquarium is a remarkable place that provides sanctuary for two polar bears, rescued from an abusive situation with a circus in 2002. The two are doing great in their new home and share it with two other polar bears that have lived there since they were cubs.

Polar Bears have been over hunted in the past and its survival continues to be threatened due to melting sea ice from which it hunts seals. If you would like to find out how you can help Polar Bears check out this site at → www.polarbearsinternational.org/education/how-to-live-greener.

Point Defiance Zoo and Aquarium offers plenty to explore and experience while you are there. Feeling hungry? Stop at The Plaza Cafe' for a bite to eat and shop next door at Plaza Gifts for a souvenir to take home.

A special exhibit opened on August 2011 called the Cats of the Canopy. Clouded Leopards were made a vertical playground of trees The leopards are known to climb while hanging upside-down under branches, and descend tree trunks head-first. Despite being protected under the Endangered Species Act proper enforcement is lacking as animal parts and skins continue to turn up in open markets.

Point Defiance Zoo and Aquarium is dedicated to wildlife conservation for endangered animals like the Clouded Leopard along with others at the zoo. The zoo and aquarium also offers classes, camps, group reservations, private events and the opportunity to become a member. 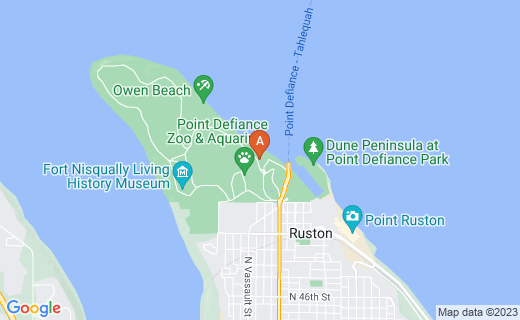