The Teuk Chhou Zoo is located next to the Teuk Chhou river a short distance outside of the town of Kampot in the southern part of Cambodia. The zoo is often referred to as the Kampot Zoo and just to confuse matters further, its close proximity to the city of Kep means that it is sometimes called the Kep City Zoo. The zoo is easily and cheaply reached by Tuk Tuk. The journey takes around fifteen minutes.

The zoo, which was opened in 2000 is fairly popular with tourists to the area as once they have gone on jungle treks and river trips there is not a great deal left to do apart from relax. A trip to the zoo makes for an interesting diversion. Entrance to the zoo is $4.00.

Today the zoo is privately owned by Nhim Vanda, the vice president of Cambodia’s National Committee for Disaster Management. 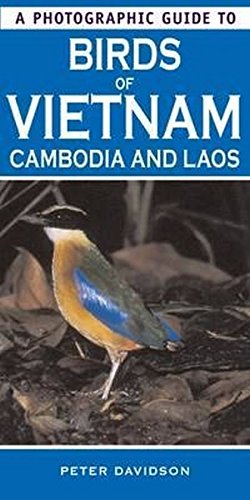 A Photographic Guide to Birds of Vietnam, Cambodia and Laos
Buy Now

A visit to Teuk Chhou Zoo

The following is extracted from The Itinerant ZooKeeper and includes a visit to Teuk Chhou zoo in April 2006.

Next stop was Teuk Chhou zoo (opened 2000). Now this is a curious place. I would go as far as to say very odd. The setting is fantastic. In lavishly planted gardens it has the Bokor mountains behind it and views to the front.

Entering through a gateway which is flanked by two huge garishly painted tigers you pay your $4.00 entrance. The leaflet I was given stated that this was the 'National Animal Resource Center'. The first enclosure is crocodiles which you view from above, looking down upon a pond packed with water lilies and weed. It would not look too bad except there was almost as many plastic water bottles floating about as there was lily pads. Just outside there was a big garish gory frieze/statue compilation showing people being eaten by alligators.

These big odd fluorescent gaudy statues are all over the zoo. Some are animals, some are people, some are fruit. I am sure there must be a historic or fabled reason behind them. Throughout the park music and some sort of chatter is being piped out over loudspeakers. It is not nice.

Enclosures? I don't think there is a nice one in the whole zoo. There are many that just scrape by because they provide shade but they are all inadequate. Only the bear enclosure had a barrier (which was broken). One of the tiger enclosures had half a barrier. I mean, what is the point? So nothing else, not even the elephants! It would not have been so bad if there was adequate supervision but there wasn't. I only saw two staff members and this place is very spread out. The bull elephant had 2' long needle sharp tusks and was a wicked little beast. Maybe his temperament was because the enclosure had not been cleaned in four days or because there was no food in evidence. Both elephants were underweight. These elephants were not chained, not supervised and there was no barrier. The cow was chewing on a shovel. Maybe they could not clean the enclosure because of this.

There was no evidence of enrichment anywhere. That said I saw no evidence of stress or stereotypic behaviour. It may well have been because everything was too hot and they were taking a siesta. It was hot! One enclosure held two young sun bears which were obviously being hand reared. They were sharing the enclosure with a young gibbon. As I approached the cage the gibbon swung down and held on hugging one of the bears. It looked dead cute and I wondered how the relationship would develop. A little further on there was another enclosure with larger gibbons in with larger bears. It is a mix that seems to work, even in the small space available.

The lions had two cubs. They were white, one especially so. The lion and tiger enclosures at the far back of the zoo were some of the largest and yet were still far too small.

One of the strangest things about this collection is that it is supported by a church*. Would that/could that work anywhere else I wonder? It is not unusual from churches in the UK to approach zoos for support, but the other way round!

*The Reverence Kim Shan Wham of the Myung Sung church in the Republic of Korea.

The collection gives its purpose as:

"To protect, prevent, rescue, manage and help breed animals in a sustained way."

"To provide the opportunity for research."

All very noble but sadly no real evidence that any of these are being achieved except perhaps rescue?

There is a system of labels but I could not read these. Some were in English and some gave in English the Cambodian name for the animal. Some, where I was able to work out what it said were, in any case, wrong. It wasn't till I neared the end of my visit when looking at the pair of Sarus Cranes that I figured out what some of the English on some of the signs was on about. It was the scientific name!... but obviously passed on by whispering Chinese whispers over defective telephone line. The sign read "Kruanti Gone". This was of course meant to be Grus antigone. I was tempted to retrace my steps and look at the signs in a new light. 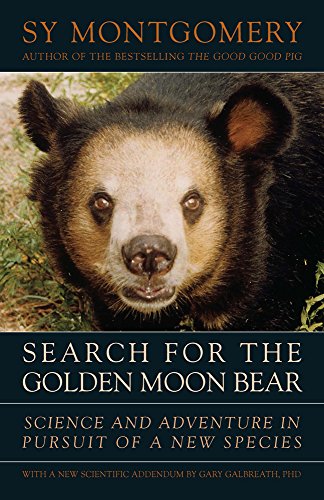 Search for the Golden Moon Bear: Science and Adventure in Pursuit of a New Species
Buy Now

My companions for dinner tonight were Yasmin, a French oil engineer working as the only female among hundreds of men on platforms off the coast of Africa. A truly lovely girl with whom I had an instant rapport when I met her this morning. And Laura (pronounced Lara), an American nurse from St. Louis, Missouri, who had bought a cycle for thirty dollars and cycled down from Phnom Penh. Very pretty, long blonde hair, beautiful blue eyes, calm, friendly, wise. Deceptive appearance for a real tough cookie. You'd have to be to cycle those roads. Laura had quit her job and been on the road for ten months. Off to China next.

Dinner was good. We ate tasty Cambodian food. Conversation was stimulating. Last night was good, tonight was a bonus with two beautiful women for company.

Back at the guesthouse, Laura and I booked on an all day trip into the Bokor National Park for the following day.

Teuk Chhou near Kampot in Cambodia 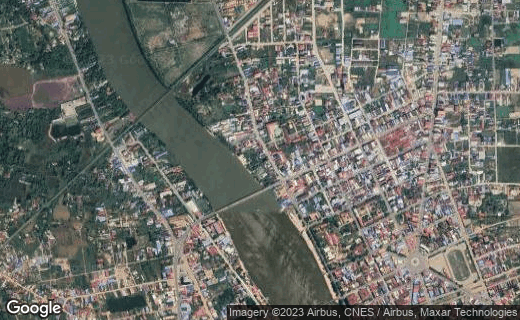 If you are interested in zoos please check out:

and the regularly updated blog