The Azawakh appears light-weight, graceful and tall with a swift-moving composure. When they are running, they almost appear as if they are floating through the air. Their bodies are designed for speed, so they consist mostly of muscle. When standing, its flat back, long tail and long legs almost take on the shape of a rectangle. The dog’s structure also consists of withers that are lower than the hips. It is a very thin breed with tight skin and a flat, dry-bone figure. Some often see this dog and accuse the owner of neglect due to its extremely thin frame. It has very short hair, soft skin and the belly is sometimes hairless. The legs, hindquarters and neck are very lean and muscular in appearance. The head of the Azawakh is long, flat and prominent, almost in the form of a triangle, with large almond shaped eyes, droopy ears and a V-shaped snout. The feet are round with toes that are close together. Some have pigmented pads. One very recognizable feature of the Azawakh is that their ears are always hanging down, they are never risen.

The breed exists in many different colors, all varying in refinement, yet still consistent to one basic format. There are two basic sizes, large and extra large.

Weight and Height: Male Vs Female

In a dog with the correct weight, no more than 3-5 ribs are visible. When the body length is compared with the height, the ratio is considered normal at 9:10. The body length is also 90 percent of the total height, though it is sometimes seen a little higher in females.

The coat of an Azawakh is always short and smooth with many color combination possibilities including clear sand, brindle, red, fawn, parti-color, brown, blue, black and white. Shades range from light to dark, and flecking is most often present on the legs. The head is sometimes covered in a black mask with an inconsistent blaze, while the body is often a solid color with predominantly white markings along the tail, bib and legs. The Azawakh is not disqualified from the AKC or shows for colors or markings. 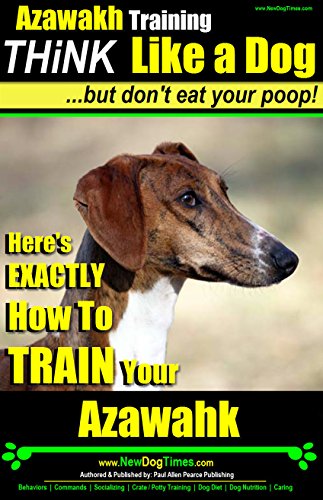 Azawakh Training | Think Like a Dog, But Don’t Eat Your Poop! |: Here's EXACTLY How To Train Your Azawakh
Buy Now

Grooming an Azawakh is simple and basic as they do not require anything real fancy. Since they have very short hair, they do not shed very much. They are considered an average shedder, and they only require that their coat is brushed at least once a week in order to keep it looking healthy. A bath with a mild dog shampoo every so often helps to keep the coat shiny and smooth. It also keeps them smelling nice. Other basic grooming such as cleaning their ears, trimming their nails and brushing their teeth are additional ways to keep this breed of dog happy and healthy.

Nail care is usually necessary about once a week, and it should start when the dog is a pup so they can get use to the idea. Owners should take care not to cut the nails too short as this breed is very sensitive when it comes to their feet. They do not like anyone touching their feet. If the nails are clipped too short just one time, they may never cooperate with the owner during nail clipping time again. Other than that, upkeep for this breed is very minimal.

Decide if this dog is right for you by reading, which breed is right for you or how to choose the right companion dog, both very nicely written and informational articles that may interest you.