The Joys and Perils of being a Feral Cat Caretaker

October 16th gets celebrated every year at my house.  Not a birthday, not an anniversary, it marks another kind of celebration.  It is National Feral Cat Day.  My husband and I are feral cat caretakers, a volunteer occupation that constantly rewards us with the love and devotion of some of the most beautiful and independent felines we have ever known.  Some have come to trust us, one has even come to live inside with us and is sitting on my lap as I type, but all have found places in our hearts and lives.

What is a feral?

A feral cat is not a stray. It may be the offspring of a stray, or the offspring of someone's pet that was not taken care of. To read my hub about the definition of feral cats and why we should take care of them, please click here. Essentially, feral cats are wild animals, and should be respected as such. They do not trust humans, and will not let you pet them or come close to them, unless you have developed a relationship of trust with them. 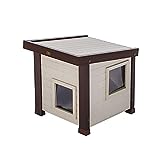 The first feral we met was a beautiful female whom we named Shadow. She came to our porch in March of 2007. Right away, I noticed her right ear had been cut. I put out food and water for her, and she gobbled the food right up. I watched her from inside the house, because she would run away whenever she heard the door open.

By mid-April, she was eating two meals a day at our porch bowl. She came when she heard my husband's truck in the driveway, about 2:00 am. Then, in the evening, about 6:00 pm, he would go to work. There she would be, waiting for her dinner.

I searched online for feral cat information, and came across the local organization. I sent them a picture I'd taken of her, and they wrote back saying that yes, she was feral, and the cut on her right ear was an eartip, meaning she'd been spayed and was part of a feral colony at the time of her spay.

Dot and Not joined Shadow at the porch food bowl in May 2007. We'd known them since they were born in Spring 2005. Their momma kitty was the pet of the people across the street, but the kittens weren't being taken care of. When the people moved, they took the momma cat with them, but left Dot and Not. We changed Not's name to Tux, because we couldn't stand calling him Not.

Tux comes and goes. Currently, we haven't seen him for almost 6 months, but he's disappeared before and always comes back. If he doesn't come back, then we'll assume the worst, but at the moment there's nothing we can do.

Dot appears every two or three months, stays for a while, then goes off on another cat adventure. We were able to trap him in a humane trap and take him to a cat clinic on September 17, 2007, where he got neutered, eartipped, and his rabies shot. He spent the night inside with us that night, in a carrier, then allowed my husband to carry him outside and release him to his home again. The next day he was back eating at the food bowl.

On September 9, 2007, my friend Erin, who was living with us, saw two kittens crossing the road.  We had seen a pregnant cat once or twice, but she had not been coming to eat on our porch.  The kittens came into our neighbor's yard, so Erin and I went out to see if we could catch them.  We caught the tiger kitten, who was too scared of us to run and hid in a tire until we pulled her out.  Then, I went back inside, got the carrier and a can of tuna, and put them out to see if I could lure the other kitten, a Siamese.  Sure enough, he fell for the bait and was able to be caught as well.

We named the tiger kitten Rori, and the Siamese kitten Neapolitan (nicknamed Neo).  Since they were only about 5 weeks old, we bottle fed them for about a week, then switched them over to canned and dry kitten food.  Bottle-feeding was a huge challenge, but well worth the sleepless nights and constant care.

Neapolitan, now named Knut, was adopted to his forever home on September 15, 2007.  He is a happy, healthy, social cat who is best friends with his doggy brother Toby and is tolerated by his kitty sister Nermal.

Rori, adopted into our home as her forever home, is the most social kitty in the house.  She snuggles with my husband and me, and constantly visits with the other cats in our household.  If one of the other cats is sick, worried, upset, etc., Rori goes over to them and rubs against them, telling them it is ok.

Tom Kitty first started coming around in May 2008.  He's now a regular visitor, and tolerates us being 5 or 6 feet away from him.  At first, he was very shy, and didn't eat with the other cats.  He chose times to come when no one else was there.  Now, he waits his turn with everyone else who eats at the bowl, and socializes with the other adult cats.  He sometimes plays with the kittens from two doors down, who are mostly outside kittens (and are offspring of feral dads).  We want to be able to trap Tom and fix him, but he hasn't let us yet.

Knut and Rori's momma cat started coming to eat at the food bowl a couple weeks after we took the kittens inside.  She didn't seem to miss them, or be looking for them.  After a few weeks of eating here, she showed up with another kitten who looks almost exactly like Rori.  Both of them now eat regularly at our porch.

Big-head kitty is our sad story.  He was, we think, Rori's dad.  He was all grey, with a ruff around his head and neck.  Gentle and calm, he slept in our laundry room/basement, in a back corner where he wouldn't be disturbed but could watch us as we did chores.  We first saw him around the time we brought Rori inside, and he ate regularly at the bowl.  He got to where he would stay on the porch while we put food in the bowl, but skitter away at any fast movement.  He would talk with us if we woke him up by doing laundry, and sometimes sleep on the dryer when it was going.

On June 5, 2008, we saw that the big-head kitty's leg was broken pretty bad and he was limping a lot.  I knew there would be no hope of catching him in a humane trap, because he was too smart for that, even (or especially) with being hurt.  Unfortunately, there was nothing we could do.  That was the last time we ever saw him, and we fear that he has left this world.

Outdoor Fluffy Buddy is a handsome grey-striped and white tom cat who has been coming since sometime late 2007.  He is feral, but we think he might have had contact with humans when he was a little kitten, because he tolerates humans when we don't go after him.

He is a sweet guy, and is very social with the other cats, head-butting them and rubbing up against them.  He has fathered at least one kitten with our neighbor's cat (who has a total of three kittens, all housepets), and teaches the kittens to hunt.  The kittens, in turn, have taught him that my husband and I are ok humans.  Just in the last few days, Fluffy Buddy has let me come out to the porch to put food in the bowl without scaring off.  He's only gone down one step, then looked straight at me and meowed.  He doesn't even wait anymore until I go back inside to come eat again.

Our feral friends make every day brighter.  Even though we have inside cats as well, we feel like our outside friends are our cats too.  The inside ones watch the outside ones, and interact with them through the screen door, just as if they were all one big community.  Who are we to say different?