First, Understand: My Dog is Insane

My gorgeous, adorable, quirky and intelligent dog is absolutely insane. When she was a puppy, she ate furniture. Now that she's grown older, she is a well-behaved little miss that nevertheless can devour any bone, rawhide or compressed rawhide treat within a matter of minutes. My other dogs literally wait for her to chew these bones for them, such is her might among the other household pets. She is simply a menace that cannot be maintained. I have seen German Shepherds and Pit Bulls that do not have the sheer biting strength that she does, because she is some sort of ungodly blend of wild dog and alien. As any dog owner knows, dog treats are expensive. I find myself going through bags upon bags of rawhide treats every month, and I can't imagine it's good for her digestive system. This leads me to some natural alternatives.

She's Not Going to Eat That

Nylabones are touted as being perfect for heavy chewers, which they would be if a dog wanted to chew on a piece of plastic that's vaguely scented like bacon. But no dog actually wants to do that, which is why they are pointless. I've never heard from a dog owner whose dog likes nylabones, which makes me feel as though they are a front for some sort of undercover feline syndicate. I've covered them in peanut butter and gotten nothing but a skeptical look. 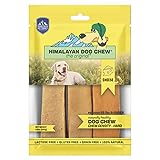 What Type of Chew Do You Use Most Often?

That's when I discovered the Himalayan dog chew. I was skeptical at first, because the thing is expensive. It's about $10 - $12 for a single one, but they claim that it lasts forever. I am not unfamiliar with lies. I have heard that time and time again regarding dog chews.

However, I was intrigued by the fact that it was essentially just really hard cheese. Apparently these are literally Himalayan chews -- as in, real food that Himalayan people eat. I'm not really fond of "ancient secrets," but I was fond of the idea because I know exactly what very hard cheese is like.

Hard cheese is a solid block of material, like this Himalayan dog chew. The reason roll hides and rawhide don't work well is because the dogs soften it up and pull pieces off of it. Hide is hide -- it's basically a roll of cloth-like material. You can't do that with a hard cheese, instead you need to slowly wear it down.

Once they get small enough, you can pop them in the microwave for 30 seconds. They expand into a light cheesy treat that you can give to your pup -- after it has completely cooled, of course. 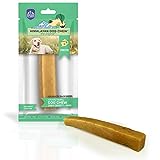 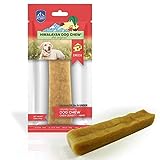 Why the Himalayan Dog Chew is My Favorite

Good for Any Dog

The other value to the Himalayan chew is that it's still soft enough that dogs with lighter bites can enjoy it. The antlers are pretty much useless for my other dogs, though they do still like to carry them around. The Himalayan chew can be enjoyed by all of them, which leads to more enjoyment all around. 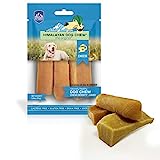