The Raven and its Symbolic Meaning

The Raven, A beautifully dark bird often portrayed in movies and art as a dark almost evil creature. Edgar Allen Poe used the Raven to symbolize mourning and never ending remembrance. The Raven is commonly feared for it's rather large size and prominent beak, the all black plumage of its feathers and the distinct hackles around its neck make it a perfect match for most nightmares.

Though these creatures are rather misunderstood, the one thing that can not be denied is the fact that through history, the raven has been honored for its intelligence and has been highly respected across the globe.

To Native American's the Raven symbolized the void- the mysteries that were yet to be known or formed. The Raven is symbolic to the black hole in space. In Native American Tradition the Raven is the guardian of both ceremonial and magic healing circles and is also the patron of smoke signals.

In most ancient folk lore the raven is contradicted as good and evil.

Christians/Hebrew view the raven as unclean-impurity, mortification, destruction and deceit. yet the Bible also says that ravens were the protectors of the prophets feeding Elijah and Pail the Hermit in he wilderness, also ravens helped St.Cuthbert and St. Bernard.

In Europe they are connected symbolically to both wisdom and prophecy- but from Christian time they also represent darkness, destruction and evil- often tied into the deities of evil and death.

In northern Europe the Pagen Danes and Vikings symbolized the raven with luck. The daughters of great warriors and kings would sew the raven onto flags which were a token for a safe voyage.

In Ireland the Raven is honored for its sheer knowledge and intelligence. "to have a raven's knowledge" comes from an old Irish Proverb.

The welsh also viewed the Raven as a bird of wisdom and prophecy.

The Raven is a contrary spirit, even in history this is proven. On the dark side it represents the profane, trickery, evil and destruction- ultimately death and doom. Yet on the bright side it stands for the healing, wisdom, protections and prophecy. This bird is one to be used for good or evil, the power it yields and signs that are given are up to you t decide. The Raven is both the symbol of the sun and the moon. 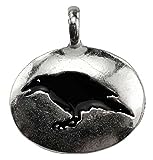 For more reading on the raven