The Tsavo Man-Eaters - Why the Tsavo Lions Became Man-Eaters

The lions of Tsavo killed and ate 28 Indian men. And on a second thought, the Tsavo lions also fed on about 110 local African men. This happened on March 1898 to December 1898 when the British started building the Kenya Uganda railway. It was not until the railway line reached Tsavo that the lions took charge and decided their meals will be human being.

The first missionaries from the Church Missionary to East Africa were Rev. Johann Rebmann and Dr. Johann Ludwig Krapf (may God rest their souls in peace) who arrived in Mombasa in 1844. The two, together with David Livingstone (he who inspired abolitionists of the slave trade, explorers and missionaries), helped open up East Africa to missionaries who initiated the education and health care for Africans. These missionaries had to study and learn African languages and cultures in order to communicate and spread Christianity - the names of these missionaries are held in high esteem by many African. It took the missionaries well past the time the railway was being constructed for the missionaries to fully educate the Africans. It is no wonder that before the year 1920, most African were disposing off their dead and those very sick by throwing them in the bush so that the Gods (read lions and hyenas) can take care of them there in the bush.

In 1898, Her Majesty’s Queen Victoria of the United Kingdom of Great Britain and Ireland had sent Lt. Col. John Henry Patterson (1865 – 1947) as the chief engineer in charge of the construction of the Kenya Uganda Railway. Chief Engineer Lt. Col. John Henry Patterson had gone to East African with semi- skilled laborers from India to work on the construction of the railway line. Upon arrival in Tsavo River, he had to construct a railway bridge over that river and it seemed to take a little bit longer there. The local people must have provided plenty of “free” unskilled labor.

It’s at Tsavo Bridge that two large male lions killed and ate 28 Indians and nearly 110 African who were working for Chief Engineer Lt. Col. John Henry Patterson in the construction of Kenya Uganda railway. These two man-eaters of Tsavo were so interested in feeding on humans that no scares, campfires and thorn fences would prevent them from going for a few humans at the site camp every night. Hundreds of Africans managed to flee from Lt. Col. John Henry Patterson’s site thus halting construction on the bridge. 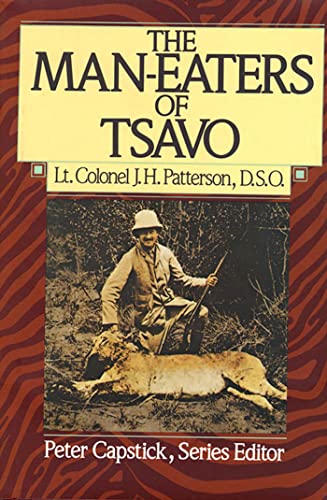 Come what may, Her Majesty’s Queen Victoria of the United Kingdom of Great Britain and Ireland wanted that bridge completed, lions or no lions.  This being the case, Lt. Col. John Henry Patterson had to eliminate the lions himself so that work on the construction of the bridge can resume. On December 9, 1898, he shot dead the first lion, and three weeks later he brought down the second man eater. It took eight strong men to carry the carcass of each lion back to the camp. As soon as the man-eaters of Tsavo were dead, the construction resumed and the bridge was completed in February 1899. Latter, the skins were carefully removed from the lion carcasses and Lt. Col. John Henry Patterson used them as floor rugs for 25 years before selling them to ChicagoFieldMuseum in 1924 for a whopping $5,000 at the time - Lt. Col. John Henry Patterson must have made himself a fortune from property that belonged to England and its colonies. Contrast this amount with the Queen Victoria’s donation of £2,000 sterling to the starving Irish people from the potato blight of 1845

Whilst the UK Parliament passed the bill that abolished the trading of slaves in 1807 in all its colonies, the slave trade from East Africa to Arabia which was dominated by Arab and African traders in the coastal cities of Zanzibar, Dar es Salaam and Mombasa, was just about halting at around the period the Kenya Uganda railway was being constructed at Tsavo. Since TsavoRiver where the bridge was being constructed was a main crossing point for slave caravans bound for Zanzibar, the Tsavo lions may have been accustomed to being fed on dead and sickly slaves.

Alone in the Bush

Whilst the cremation of dead Indian/Hindu railroad workers may be sighted as a reason that was inviting scavenging lions, this may not be true as the Hindu cremations still go on today without creating man eating lions from thousands of wild lions in East Africa. But perhaps what may be questionable is what a military Lieutenant Colonel is capable of doing with illiterate/hostile freed slaves, and Tsavo lions, alone in the bush.