The true cost of owning a dog

Pebble is my first dog - she's a multi generation Australian Labradoodle. They were specifically bred by Wally Cochran in 1988 to work as guide dogs for people with allergies to dog fur and dander. Not having adopted a dog before, I didn't really know much about them. Pet ownership in New Zealand is quite high - with over 58% of Kiwi's apparently owning a dog or cat. Wanting to live the dream as a new migrant, and with some sweet persuasion from my darling wife, I conceeded to joining the ranks. "It mustn't smell and it mustn't shed loads of hair" were my only demands. So the search began and we settled on the designer dog.

Hip tests, baer tests, genetic testing, puppy health checks, microchipping, health guarantee's, 6 weeks free insurance, free food for 5 days. Sounds like an advert for a car; just fuel up and drive away! OK, sold for $1695 (gulp). The only difference is, we didn't get to test drive Pebble. The breeder selected a puppy for us, based on our family profile and delivered her by Air Mail (delivery costs excluded). After adding on the on road costs, delivery price came to around $1900. Small price to pay, for a hypo-allergenic, non-shedding, non-smelling small bundle of fur!

As with all guarantees, it pays to check the fine detail. The guarantees in this case were limited to the genetic testing carried out.

Preparing for the arrival

While eagerly awaiting the arrival of our cute family addition, we wanted to make sure she would be comfortable on her arrival. Being a girl, she obviously needed lots of pink and purple items. Off to the local pet shop, and $500 lighter we are all geared up. Soft car carrier, small collar and matching lead. 2 pretty metal bowls for her food and water. A rather large crate (she will grow into it), along with a nice soft bed for her oversized crate. Some cuddly toys. Another soft bed for when she's not in her crate and a bag of her favorite food.

As with all babies - human or canine, they have a tendency to grow!

Who's been sleeping in my bed?!

We're quite lucky to live in the catchment area of a well respected Canine School; they had places available for Pebble's Pre School education. A well placed sales person, having noticed a rather excited looking family pre-loaded with dog toys, treats and the works, figured out we would need to get Pebble signed up straight way, in time for her arrival next week. $125 for a 4 week intense induction to human etiquette seemed very reasonable.

Costs in the 1st month

Now that all the upfront costs are paid, it's just a case of some routine maintenance and the last set of puppy vaccinations. Wait, what do you mean that crate's too big for a puppy? Why did she just pee on the carpet, did they not teach her anything at Pre School? What do you mean that walking harness is the wrong sort? Why have her poo's gone so bad? That small collar doesn't seem to fit her anymore! Come back - you're not supposed to go out of the yard yet for another 3 weeks! Why won't she come back when she's called? Best send her back to school!

Back to the pet store for some new supplies - smaller crate, some special spray for the carpet, a pen to keep her from wandering, a new collar. Wait, best change her food, this one she came with from the breeder seems to be upsetting her tummy. Off to the vets for her last set of Puppy vaccinations. Huh? She's already had a puppy pre-check why does she need another when registering? We must go down to the City Council and fill out her registration!

The importance of pet insurance

Pebble's free insurance is about to run out. Having owned an insured cat in the UK, I soon learned how valuable that cover was (poor thing had its tail slammed in a door, and was at death's door from being bitten by a rodent she was "playing" with). So, this was an easy decision to make. A quick phone call and we have a Gold Level policy in place, at a fraction of the cost we've spent on Pebble in her short time with us ($48 a month).

For the next 10 months, Pebble attended the Vets on an almost monthly basis. Her early spay by the breeder exasperated a problem with her inverted vulva. Antibiotics for puppy vaginitis, treatment for diarrhea, salmonella and giardia (the breeder had kept the puppies on a farm near livestock) - the vet bills just kept coming in. Thankfully, the claims were paid out by the insurer (minus the excess).

The vet bills for medical and surgical treatment for the first 12 months totalled $3500 (we received $2625 back from the insurance).

Did I mention my dog is a Labradoodle? She has a non-shedding fleece coat. The penny just dropped - her coat doesn't shed, hence it needs cutting. A lot. I'm not a hair dresser, and I think Pebble would hide under the couch if I came at her with a hair of clippers! So we were sending her to the groomer, maybe every 8 weeks at a cost of between $75 - $110 depending on how big she looked that month! After her 5th visit in one year, I told the groomer to clip her short - for the Summer of course. How I regretted that!

Total grooming costs for her first year come in around $500.

The dog harness we were recommended 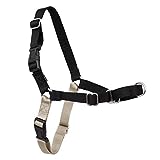 Pebble became quite ill at around 12 months old. She was refusing to eat her kibble. Our friend, Google, recommended to starve her out; dogs get fussy and must conform! We changed her food (again) but she still refused to eat. She ate one meal of cheap dog roll then went on hunger strike again. Back to the vets, this time with a thorough examination of her mouth and throat. "Your dog has tonsillitis!" Do dog's even have tonsils? Apparently so. More antibiotics and "We recommend that you put your dog on raw food too". No improvement after 2 courses of treatment - time for a tonsillectomy. Very rare, and we were told vets typically only perform 1 procedure a year.

Try storing that in your family freezer!

What type of food do you feed your dog?

We live in a town house, so Pebble doesn't have free access to a garden. She poo's on average twice a day (we know, as we have to take her!). So in her first year, we've spent around $80 on poo bags. After trying the cheap ones from the Dollar Store, we decided to pay a little more for the reassurance they wouldn't break or be too small to contain the contents!

Being a family dog, Pebble comes most places with us. We needed to make sure she travelled safely and securely in the car, so had to purchase a dog boot guard. Luckily we managed to buy a discounted one at $85.

Pebble also loves to retrieve tennis balls. I've lost count of the number of chewed and lost balls, and balls stolen by her pals at the park. She also likes to play tug - we've gone through several ropes that have turned threadbare and fluffy teddy's that have spilled their innards! I'd guess another $100 spent.

A word of caution

I had no preconceived ideas of how much it would cost to own a dog. There are many articles and blogs listing likely costs but few that break down a real life example.

Our designer dog has likely cost us slightly more than the $6423, as we had started to feed her raw food. She also gets the odd doggy treat (or two), and has been on a few more training courses, which I haven't accounted for. As you can see, if we hadn't had the foresight to take out a Pet Insurance Plan for her, the first year costs would be pushing closer to the $9000 mark.

So be warned! Make sure you do your sums before succumbing to the whims of your children or family to buy that cute adorable puppy.

You may also have spotted a Welsh Springer in one of the photos above. I wonder what our year 2 costs will be?

How much do you estimate you have spent in the first year?