Thirteen Life Skills for an Inside Cat

Smokey the kitten here, with a "Thursday 13" list for you. This week, we will discuss the essential skills you need to impress your adoptive humans and prove your cuteness so they will keep you. This is very important to me right now, because I am being fostered, so I am looking to hone my cuteness skills so I can get some new human parents. I love my foster parents, but I would like a home of my own. So here are the skills I'm working on, plus some that the other cats here say I should learn.

1. Use the litter box all the time

I've got this one down already. Being an outside kitten first, I wanted to go back out to do my business. But that's not always possible when you're inside. Sometimes the humans are sleeping, so they can't hear you asking to go out. Sometimes they leave, and then you've got no chance of being let out unless you can open those darn doorknobs or find a window screen to tear out.

At least most humans keep an alternative around. It's called the litter box, aka poopy tray, poopy box, bathroom box, use this, or do your business there. It can contain clay litter, shredded newspapers, seeds, absorbent crystals, or other litter. Whatever it contains, you should go pee and poop in it, and nowhere else in the house. Not on the laundry, or the bedding, or the floor, or carpet. USE THE BOX. If it's terribly smelly, you can sometimes get away with using the area of the floor right next to it, but only under dire circumstances.

This is a biggie, kittens! I learned this one early, but am still practicing it. I'm an inside/outside kitten right now, and so this is very important for me. If I go out, the humans want me to come back. I want out because I want OUT! After a bit, I realize I had a good thing going there...food, water, a lap to snooze on, a warm place to be. So I wander back and jump at their door until they let me back in. Once inside again, I get so many pets and loves that I wonder just why I went outside in the first place! If I never came back inside, I know they would miss me. I would miss them, too, and all the things that go along with being inside.

This is one of the most important skills. Even if you're the most homely kit in the world, you can still give the humans that "cute look" and they'll fall for you. Just remember to keep it up, or they may tire of you. It also does wonders when you're in trouble, although it doesn't always work. Purring big helps too.

No self-respecting cat likes being constrained, but collars are a necessary evil. The humans usually won't let you out without one, especially one with jingly tags. I know, the tags cramp your hunting style. You won't even be able to see the birds if you're not outside, though! So, wear your collar and keep it on. It should be a breakaway one, so it can come off if you're stuck on a fence or a tree branch, but other than that keep it around your neck.

I'm working on this one. Since this is a new (temporary) home for me, I have a lot to learn. I've figured out I need to lay down on laps, especially if the human is on the computer. I sit and wait for them to pick me up if they're in a chair, in bed, or on the couch. I know I'm not supposed to jump on the kitchen counters.

The other cats have told me that I'm not supposed to be on the computer desk, and the lady moves me when I get up there. The table where the tv remotes are also seems to be a "no-no" place. Same with the refrigerator.

I have found some good toys, and those are obvious "yes" playthings. Swatting the other cats is a "no-no", but running and playing with them is a "yes".

Each house has its own rules, so when you get your forever home, pay attention to your new humans to learn the new rules.

6. Get along with everyone

My human foster parents let their cats get used to me (and me to them) by letting me in for a few minutes every day, because I was an outside cat first. This allowed us each to check the others out, but have an escape route. Letting you have a room of your own in your new house works just as well. Then you can play paws under the door with the other cats and sniff their new smells. Sometimes you and the other cats can switch rooms, so you can explore and they can sniff your place.

Same goes for dogs. If there are dogs in the house first, be sure they won't automatically think you are prey. Then teach them who's boss, after they get used to you being there.

7. Be social with your humans

Humans want a cat who likes them. Running under the bed is okay the first few days, but no one likes a terrified kit who stays hidden or slinks around when the humans are there. Sure, everyone has their days when loud noises scare you or you just don't want to socialize. But make an effort to be with them.

Of course, they should do their part, too. No very loud noises, no chasing you, and no pulling you out (or shoving you out with brooms) from under the bed when you've slunk under there. That's only politeness for them to respect your space, too.

8. Learn to fit in to their lives

Demanding things will get you somewhere, but it won't be where you want to be. Sure, you can beg for food, tell the humans when you want to be petted, and ask them to play with you. But being too pushy will not help your case, and being screamy will annoy them and get you locked in a room by yourself.

They will decide a routine for you, and usually it will work if you give it time. They have obligations, too, so learn when they leave and come home, when they wake up, and what things they do around the house. Then fit in with that by waking them up for food about the time they'd get up anyway, walking around them when they're doing chores to keep them company, and sitting with them when they're on the computer or watching tv. This shows them you value their companionship, even when they're busy. If you're within reach, you will get more petting and attention, as well. And you'll be there reminding them that you need time, too, for food and for play.

Grouchy kitties are no fun. No one (kitties or humans) likes a swatty, hissy cat. Be yourself, but be pleasant. If you are grouchy, chances are you don't feel good and should be seen by a vet. Sometimes, grouchy kitties who don't have health problems can be trained by behavior modification, but not always. 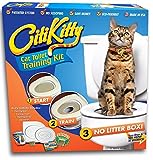 Humans aren't very versed in cat nonverbal communication, so they need some help in understanding us kitties. Use your voice. You can make small squeaks, meows, and MRRRRROOOWWWWS to let them know what you want. Make each request a little different, so they can distinguish them. A chirp for petting, a yell for food, a small meow and swish of the tail for water, a paw movement and purr for playing. Running to and from something (like the door, food or water) also works.

You should also have exaggerated body movements for things you don't like. Stopping purring altogether and raising a paw works for when you are through being petted. Glaring at the litter box and trying to cover it from the outside tells them it needs changing.

Many houses have multiple scratching posts, but only one or two that the humans want you to use. Learn which ones they are and use them regularly. This also cuts down on hurting your humans accidentally when you're kneading them or playing with them.

You don't have to come when called all the time, but it's considered polite by humans if you at least respond with an ear twitch to whatever they decide to call you.

This is probably the most important thing to learn. Humans are a different species, so they won't ever be able to understand you completely, no matter how hard you try. So, don't hold it against them for too long. Don't hold grudges past a few days. Let them know when you have forgiven them by cuddling with them or playing. They'll do the same for you.