Tips for flying with your cat

Stay in style with Sherpa! 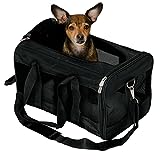 Yes, the title is correct. It appears that more and more cat owners are traveling across states and countries and are bringing along their precious,furry four legged friends.

Inevitably, in many households it will occur sometime that due to a holiday vacation or due to a permanent move, pet owners will find themselves debating over the ifs and hows of bringing their pet along for some long distance roaming. In some cases traveling on the road even if for a lengthy journey may appear to be the prime reassuring choice for a worrisome cat owner. However, this may turn out to be time consuming and very lengthy.

Air travel may appear in many cases the most convenient way to go and in some cases it may turn out being the only option left.

We have all heard the front page horror stories of pets running loose on runways or worst dying from heat stroke on the tarmac. But as anything else, these are stories that "sell" such as plane crashes, cruise ships' rotten seafood, and actor's infidelities.

The truth is that there are so many pets traveling on planes each year that the accidents mentioned in newspapers are just a microscopic fraction. Of course, we should not underestimate these terrible happenings which are a pet owner's worst nightmare.

On the other hand, we must admit too that these happenings are also an airline's worst nightmare due to the bad reputation following a pet's accident or death.Airlines, therefore, are becoming more and more pet friendly, allowing pets on board even in the cabin nowadays. When traveling in cargo extra care is provided in assuring that personnel are professionally trained in pet handling and that the air is pressurized and the temperature properly controlled.

I have experienced first hand both cabin and cargo travel with my 8 year old Persian cat which has followed me throughout Italy, Germany and the United States.I really wished they made a frequent flier program for felines, I am sure by now she could have gotten many air miles.

Of course having the option to choose, I do prefer to bring her along with me in the cabin, just for peace of mind. I like to have her in sight right in front of me and hear an occasional meow now and then when lunch or a snack is served. My cat takes the flight well, maybe a meow while boarding the plane when the engine is real loud or when taking off, perhaps because her ears may be popping just as mine do.

If you are traveling with the cat along in the cabin be prepared: your pet will be an absolute attention grabber. I have not been on a flight without having a bunch of people around her like a celebrity boarding a private jet. She doesn't mind the commotion; at some times she even seems to enjoy the popularity. I must admit the flights with her in the cabin are the best, I have company, extra space for my legs since they usually give us the front row and flight attendants will always be extra nice and make sure to stop bye just to say hi.

I really love carrying her in her cute Sherpa bag.

However, a day had come when I had no other choice than to put her in cargo on an overseas flight and I must admit I was terrorized. The reasons were numerous, the weather, the fact that she never traveled in cargo before, and of course those famous front page" horror stories".

Fortunately, I did a lot of research before hand and found a lot of reassuring information.

First of all, most airlines had an embargo rule, which meant that they would not accept the pet on board if the temperature was too cold or too hot during any part of the itinerary because they were aware that the pet's health would consequently risk being in stake.This may be very annoying for the owner because he/she cannot know how cold or hot it would be until the actual day of the flight and therefore there must be a back up plan if the pet is not accepted. However, this is undeniable proof that the airlines care for you pet's wellbeing.

In hot temperatures snub nosed breeds are at particular risk of having breathing problems and more stringent restrictions may apply. When I took my cat along it was winter so this was not much a concern. There were however limits on flying pets if it was too cold. To play it safe I had my vet prepare a form which stated the temperatures my cat could withstand. My vet also strictly prohibited giving her any sedatives (no Acepromazine!) because they would impair her ability to balance herself if turbulence would be encountered.

I also made sure to find a proper carrier with three openings on each side to assure enough air flow (it must be IATA approved) and stuck a tape with the word Live Animal' and This way up' to to prevent rough handling.I also attached a nice picture of kitty and wrote the flight number and the following cute note:

"Hello, my name is Miccola and I am an 8 year Persian. This is my first time flying in cargo, so I am a little bit nervous. Please take good care of me and ensure I have a great flight and I will be happy to fly with you again!"

Before departure, I also e- mailed a bunch of cat breeders that routinely shipped their cats via cargo and asked them about their experiences. I did not get one breeder saying that they had a bad experience. They were all very reassuring and one actually told me that they would loose much of their business if flying the pets was too dangerous.

Still, the day of the flight I was nervous, and when I had to leave her at the check in desk I found myself stupidly in tears along with people saying goodbye to two-legged family and friends.

The nine hour flight seemed long and I was praying we would not get any turbulence. Luckily, it turned out being a very smooth flight. Once landed at the Newark International though, I was getting more and more nervous because they were taking a long time to reunite us. I knew that pets were the last to be boarded and the first to be un-boarded so this was making me slightly anxious along with the other pet owners.

Then I saw from a distance her carrier on a big cart and there finally was Miccola, just as happy as I was to see her! She was perfectly fine and whispered the cutest meow.

I looked at her and thought to myself that there was really no need to worry because I noticed many other pets were being unloaded successfully just as her and I also thought who knows maybe sooner or later the frequent flier felines will become a reality!