What Exactly are DAP diffusers for Dogs?

You may have heard about DAP diffusers for puppies and dogs and may be wondering what all the hype is about. It's time to unravel all the mysteries surrounding this product. The term DAP is just as an acronym used for depicting "Dog Appeasing Pheromones." First of all, what exactly are pheromones? Pheromones are simply chemical messengers meant to carry information between individuals of the same species. In dogs, pheromones play a role in canine reproduction and canine social behavior.

In the case of nursing puppies, it was found that lactating dogs produced special pheromones right after parturition, about 3 to 5 days after giving birth. These pheromones are produced in the inter-mammary sulcus and are detected by the puppies via the Jacobson organ, also known as the vomero-nasal organ, which is located right above the puppy's hard palate and it's purpose is to detect pheromones. What's the purpose of these pheromones? The pheromones are meant to comfort and reduce stress, reassuring the newborn pups. The good news is that research has shown that the reassuring properties of DAP endure throughout the dog's adulthood. Nowadays, the dog appeasing pheromone is replicated using a synthetic form that is sold in plug-in diffusers.

What are DAP diffusers mainly used for? The products are advertised to work for various situations. According to the DAP diffuser by Ceva, it can be used to cope with stressful situation such as a new baby, fireworks, a new baby, holiday parties, separation anxiety, helping a puppy settle in a new home and helping promote learning in indoor puppy classes. Last but not least, it can be used under the direction of dog behavior professional to help manage behavior problems. However, DAP is not recommended for hyperactivity or aggression. It will also not work for bored dogs or dogs who need to learn house training, unless related to stress. 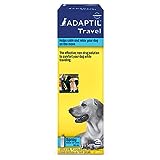 Studies Conducted on DAP for Dogs

There were quite several studies conducted on DAP diffusers for different situations. This is a brief rundown on some of the most popular ones. Hyperlinks are clickable for those who want to view the actual studies.

DAP is now available also under the form of a spray and in the form of collars impregnated with the appeasing pheromones. As effective as these products can be in reducing certain types of stress, it's important to recognize that at times behavioral problems in dogs can stem from medical causes. On top of that, for certain behavior problems in dogs, a DAP diffuser may be an aid, requiring accompanying behavior modification conducted by a professional.

Alexadry©, all rights reserved, do not copy.