Diseases Humans can Catch from Cats

What Diseases Can I Catch from My Cat?

Although we generally think of diseases as being species-specific, in other words, attacking only one group of living beings, there is occasional crossover. Cats have a few illnesses which can affect people.

Following is a list of the most common disease risks you could have from your cat.

Viral diseases, such as the common cold, cannot come from your kitty. There is one exception, though: rabies. And, that is a biggie. You can get rabies if an infected animal bites you, such as your cat nipping at your hand. Even if your cat is an indoors-only pet, it is important to keep its rabies vaccines current because our kitties do sometimes escape outside. Another slight possibility is the scenario of a rabid bat or squirrel breaking into your house and biting your cat. And then your cat bites you. The easy solution: keep paying for rabies vaccinations.

Humans can catch a few bacterial diseases from their pet cats. The risks are higher and more serious for human family members with weak immune systems.

In the USA, this is the most common zoonotic (animal-to human) disease gotten from cats. It comes from a bite from an infected cat (or from a pesky flea bite). Human symptoms are swollen lymph nodes, fever, headache, sore muscles and joints, fatigue, and poor appetite. Doing one’s best to prevent scratches and bites (such as by not playing roughly with cats thus inviting them to playfully nip at you), putting regular anti-flea medication on your cats and keeping cats indoors all reduce the risk of your getting cat-scratch disease.

Cats, especially those who go outside to hunt and eat the raw wild meat, can get salmonella bacteria in their body and pass it in their poop. This disease can be prevented by keeping your cat indoors and by feeding it commercially processed food. Human symptoms are diarrhea, fever, and stomach pain. People can lower their chances of catching it by both wearing gloves when cleaning litter boxes and also washing their hands thoroughly afterwards.

For a Kitten's Nails 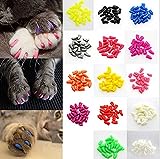 There are a few organisms which can jump from cats to humans and cause real trouble.

Fleas are the most common parasite of cats. On people, their bites can cause itching and swelling. Also, fleas can serve transmit other yucky diseases to humans. (Flea-infested cats may have tapeworms from fleas they ate while licking themselves. See below.)

The common intestinal parasites transmitted by cats to people are roundworms and hookworms. Washing hands after cleaning litter boxes and covering children's sandboxes when not in use - to prevent every stray and wandering cat in the neighborhood from pooping in it - can help. Frighteningly, tapeworms can infect humans through accidental ingestion of an affected cat's poop.

The oddly-named Ringworm disease is not a worm. It is a fungus. In cats, ringworm looks like a dry, gray, scaly patch on the skin. Ringworm is spread by contact with an infected cat's skin or fur. Infected cats drop fungal spores from their skin and fur. These can live for several months. In humans who catch it, ringworm looks like round, red, itchy skin sores with a ring of scale around the edge. To reduce environmental contamination, confine infected cats to one room until they are free of infection; then thoroughly clean and disinfect your household.

The three most common protozoal diseases in cats and humans are cryptosporidiosis, giardiasis, and toxoplasmosis.

Cryptosporidiosis and giardiasis cause diarrhea symptoms in both cats and people. Even though it is usually caused by drinking contaminated water-not by touching a cat who has either disease - to prevent the spread of infection, schedule annual fecal examinations for your cats, and follow all directions from your veterinarian

Toxoplasmosis is caused by the parasite Toxolasma gondii. People with weak immune systems, or infants whose mothers are infected during pregnancy, can get severely ill. Cats can get infected by eating infected rodents, birds, or anything tainted with poop from another infected cat.

How to Avoid Zoonotic Diseases

In most cases, common sense hygiene and regular veterinary exams will eliminate the risks of catching something from your cat. This is especially true for indoor-only cats. When in doubt, please concult your own health care advisor and your veterinarian.