HERE'S EVERYTHING YOU NEED TO KNOW ABOUT ALASKAN MALAMUTES

You may or may not already know the Alaskan Malamute is named after the native Innuit tribe the Mahlemuts. They were used for heavy freighting in the arctic. In fact, a well conditioned Malamute can pull thousands of pounds. They generally live from 10-14 years and with the exception of hip dysplasia, like most large dogs and bloat, they really don't have many other health problems. You will see some Mals have what is called snow nose, a pink/reddish marking on the black nose. It is common in northern breeds and it generally disappears over the warmer months and reappears when it's cold. This is not a flaw, nor is it a disqualifying trait but it's important to know the importance of 'trying' to keep a sunscreen on it when it is pink to protect against cancer.

ENOUGH about the technical information let's get down to their temperament! Stubborn, stubborn and did I mention stubborn? They very well may be the most stubborn breed of dogs but that's only because they also very well may be one of the smartest. Keep in mind these are sled dogs and it's in their nature to override bad decisions. There's a little saying along the lines of 'If a burglar comes into your home a Malamute will welcome them in and offer milk and cookies but if an animal comes into your yard it will be dead within seconds'. If you're looking for a 'guard' dog the Mal is way too friendly due to the fact they pretty much love everyone however with their size, I highly doubt anyone is entering your house uninvited. Having two has cut down on solicitors knocking at my door that second time. They are very alert to their surroundings and if someone is even outside your house, trust me, they will tell you! Don't mistake their kindness as them being a pushover though. They WILL pick up on a hostile situation and they WILL protect you.

Malamutes love to please so once they figure out what exactly you want of the they will make you happy. This doesn't mean they won't test you, because they will and they will let you know if they're not happy that you were gone all day but once you figure each other out all the shoes that were eaten, your flowers dug up and your garden destroyed is all forgotten.

They are loyal, intelligent and affectionate to their master. They are great with kids although I don't recommend a very small child getting in the way of them playing, they could get knocked down. It takes them at least a year and a half to realize they're big dogs and control their strength. They will eventually learn how to play 'nice' and not so rough with you and leave the hard core playing with other dogs. Mals need firm leadership and a lot of exercise or they can be VERY destructive. I've read a report of one puppy doing over $15,000 in damage in under 3 hours. They have a will to work, with incredible strength and endurance. They love to howl and dig and they WILL eat your table, couch and whatever else if they're not trained properly, exercised a LOT and given plenty of toys and bones!

Stubborn, stubborn and did I mention stubborn?

The FURminator....where there's a Mal, there is FUR 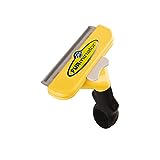 The Alaskan Malamute has a strong pack nature

The Malamute, although resembling a wolf, is not a wolf but it is a pack animal and has a strong pack nature. They can be extremely aggressive to other dogs and animals if not socialized early. Simply taking then to the dog park or for walks when other dogs are out at during puppy hood will assure your Mal 'plays nice' with the other dogs. Some people say you can't have a Mal and have a cat but as long as you have the cat first and your Malamute grows up from puppy hood with it then they are just fine. Any other animal in your yard doesn't stand a chance. Malamutes have a natural prey instinct and they like to kill. Just because yours is brought up with and loves your cat does not mean your neighbor's bundle of fur can safely come in your yard unless it has a death wish.

Malamutes have an amazing sense of direction and smell. This does not mean it is safe to let them out of the yard and know they'll find their way home. It is NEVER okay to let a Malamute off the leash or out of the yard. It doesn't matter how much training they have and how well they 'always' listen, these dogs will run! They are bred to run hundreds of miles and a well conditioned Mal can pull thousands of pounds by itself! A majority of dogs will run along the side of a road. These dogs will not! Eye on the prize. If the bunny rabbit or taunting squirrel is across the road they are focused and have no problem running out in front of a car to get closer to their prey. So do NOT let your Malamute loose. It will make it to the next city before you know it's gone, it will eat your neighbor's cat out for a stroll in the neighborhood and it will get hit by a car!

Another important point to know is a Malamute can be extremely possessive of their food so children should never approach a Malamute while they're eating. Although it may be safe to take food out of your Mal's mouth, they may not be so nice about a bone or random garbage some litterbug has thrown on the sidewalk that they should not be eating. No matter how sweet your dog is, never forget the instinct they have.

No two Malamutes are the same. They can be energetic or mellow, extra stubborn or sweet. My male is mellow and stubborn. My female is a bundle of energy and the sweetest thing in the world. These dogs have more personality than most people!