Beagles are an older breed that can be tracked back into the 5th century to small hound dogs, who were commonly used in hunting packs.

In the 19th century, England began to form and standardize the breed into its modern day appearance. Using Harriers were a major part in the breed's reformation.

Many Princes, Kings, and Lords, kept large packs of Beagles for hunting.

The breed was exported the United States in the later 19th century.

Beagles are generally between 13 and 16 inches tall, measured at the shoulder blades, and they generally weigh between 18 and 35 pounds.

The breed is known for their large hazel or brown eyes, long floppy ears, and smooth coats. Beagles tend to be tri-colored with shades of browns, blacks, and whites.

These dogs tend to have a muscular, medium sized body.

Beagles are even tempered dogs with a gentle disposition. They are generally very friendly dogs towards other people and animals.

Although the breed is eager to please, they can become bored and distracted easily, so when training a beagle, you must train in small, short sessions.

The breed is great with children, making them great excellent family pets. And, because of their smaller, medium sized build, they are the perfect size for younger children.

Beagles are strong pack animals, and they are very prone to separation anxiety. You may want to have a friend for your beagle while you're away at work, whether that be another beagle or a different dog breed.

Beagles tend to have an average lifespan between 12 to 15 years when kept at the optimum health and care.

The breed is prone to epilepsy, hypothyroidism, and dwarfism.

Because of their floppy ears, the inside of the ear does not receive proper air flow, and due to this, moist air can become trapped inside the ear. Taking this into effect, beagles are prone to ear infections. You can wipe out the ear daily or every other day, in attempts to help keep the ear clean and dry. 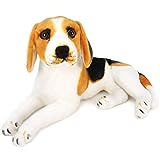