Have you ever heard of the Bio Orb fish tank? Well neither have I, but a lot of people have been asking questions about them and searching the internet for them. Come to find out what they are looking for it the BiOrb Fish Tank. There are a few different varieties of this product including something called the BiUbe, which is a tube-shaped container for an aquarium. These things look really neat and would be a good addition to a small space where something like an aquarium could really jazz things up.

I have kept a freshwater aquarium for more than twenty years. My current fish tank is a standard 55-gallon glass tank that I have moved with several times and patched up when it leaks. Fortunately that hasn't happened for awhile because I really went crazy on the silicone sealant the last time. Well, the interesting thing about the BiOrb fish tanks is that they are made out of acrylic instead of glass. Acrylic fish tanks are a really neat thing, and they've come a long way since I first started out with a little ten-gallon standard aquarium kit from the local store. Now the acrylic aquariums can be custom made, and they aren't prone to leaking from sealed joints due to the fact that the acrylic can be fused together permanently leaving no place for a leak to even occur.

If you are looking forward to getting one of these BiOrb aquariums, there are a few things you might be interested to know.

These fish tanks are designed and manufactured by a company named Reef One which was founded in 1998 by a father and son team.  According to their company website, the inventor of the BiOrb said that the fish tanks available at the time were one of two things: They were "very small and cruel" or "very large and expensive."  This is true as I have always thought those tiny little bowls you see the gorgeous Betta species of fish kept in at the pet store were especially bad, and I'm sure many of you have had the obligatory goldfish in the fishbowl that either outgrew it or only lived long enough to turn the water filthy and brown.

The Story of the BiOrb Fish Tank Continues... 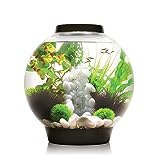 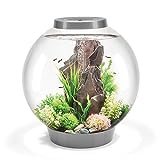 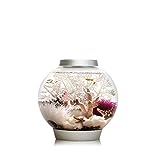 Okay, back to our story: the BiOrbs were supposed to fill this niche between the too small fishbowls and the great big, expensive aquariums that were the realm of the serious hobbiest.  So in 1999, they produced the first prototype which was a spherical tank with a 30 liter capacity made of acrylic plastic.  They didn't just make a tweener sized fish tank, though, but they also invented a special five-stage filtration system and lighting that were integrated into the package.  This made it easier to care for and maintain, and results in an overall better environment for the fish.  This size was also perfect for limited space where the fish can be humanely kept and enjoyed all of the time. 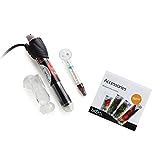 Eventually as they expanded, the line added larger versions of the original BiOrb and eventually added the BiUbe.  This fish tank also has the integrated filtration and lighting systems of it's predecessor, but in a cylindrical shape that takes up slightly less space while holding a bit more water.  Now, more recently they have added yet another design to the fold: the Life Collection.  These aquariums are square or rectangular-shaped with two flat, clear acrylic viewing windows on either side and a colored opaque acrylic wrap with rounded corners.  They, of course, have the company's trademark fish-friendly filtration and lighting systems standard.

This is a company to watch as they continue to make it easy for the busy person with limited space to keep fish in a animal-friendly way and refuse to rest on their past success.  They have sold hundreds of thousands, perhaps even millions of these fantastic little fish tanks worldwide and have won numerous awards for their innovative designs.  It is exciting to see what they will do next and what hurdles they will conquer in making easier the task of keeping healthy fish.  Why not go ahead and purchase one of the original BiOrb fish tanks now, as they are bound to become a collectors item.  Take a look here at the selections I've included, and you are also going to want some accessories as well.  After all, don't you want to make your fish as happy as they can be? 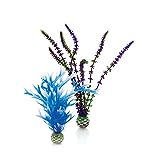