Birds That Nest in Boxes

Wildlife that Use Natural or Manmade Cavities

Many birds and animals build nests in natural cavities and they will also nest in man-made boxes. The most popular one that uses birdhouses is the Bluebird. But several others will readily use a house. They include Chickadees, Tufted Titmice, Wrens, Swallows, Prothonotary Warblers, Woodpeckers, Nuthatches, Great Crested Flycatchers, Owls and Wood Ducks.

Some animals like flying squirrels, tree squirrels, bats, bumblebees, tree frogs and others will also make homes in boxes. We have included photographs of the various cavity nesting birds and animals, as well as information about each. We hope you enjoy your visit here. And that it will encourage you to erect housing for our feathered friends.

Wildlife Will Use Man-made Housing.

Many different species of cavity nesting feathered friends and animals (depending on where you live) will take advantage of the prime nesting sites that well built houses provide. The size of the hole and the dimensions of the box determines which bird or creature will use it. Below is a list of most of the creatures in Louisiana that nest in man made houses.

Western Bluebird - 7" long, look very similar to Eastern Bluebird, except male has red extending to its back. Breed in the Western U.S. and just into Canada.Purple Martin - 8" long, male is uniformly bluish-black, female is bluish gray above and dingy gray-brown below. Breed mostly in Eastern North America, with some pockets in the west.Tree Swallow - 5.75" long, male has a blue-green back and white breast, female is gray-brown above and white below. Nests all over North America, except the lower southern states.Barn Swallow - 6.75" long, male and female have dark blue-black uppersides, male has more white underside, where female's is orange. Nests all over North America except extreme northern Canada.

This birdcam will allow your to photograph feeders and houses automatically, day or night.

One of the best books about cavity nests that I have read. If you want to put up some houses, you need to read this book.

An excellent song identification guide and cd from one of the tops in the field.

Northern Flicker - 12.5" long, male and female are almost identical except male has a moustache. Nest all over North America.

Brown-headed Nuthatch - 4.5" long, male and female nearly identical. A southern bird that will nest in boxes and often has a third family member that helps.

Red-breasted Nuthatch - 4.5" long, male and female almost identical. It nests in the northern forests and winters in the milder regions of the central and eastern U.S.

White-breasted Nuthatch - 5.75" long, male and female alike. It is a permanent resident in most of the U.S. except the south.

Wood Ducks and Others

Wood Duck - 18.5" long, male is very colorful with green, rusty red and gold. Female is brown with white around the eye. They readily nest in large houses placed near water.

Hooded Merganser - 18" long, male is striking black and white and rust, female is shades of brown. Nests in Southern Canada and Northeastern U.S.

American Kestrel - 9" long, male has gray wings and is more colorful. Nests in most of North America except extreme southern LA and TX.

Screech and Other Owls

Audubon NABB approved houses are made with the correct dimensions for bluebirds and other small cavity nesting birds. They also have a door for monitoring and cleaning. 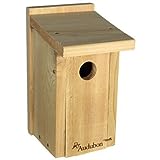 Some of the Animals That Use Man-made Cavities

Other Animals That Live in Boxes

Several other animals in our habitat like to nest in man made boxes. The most common is the flying squirrel. Since we have many of our houses in wooded habitat, we frequently encounter this small nocturnal squirrel with the wing-like folds.

Queen Bumblebees often use one of the boxes to make a nest in fall. She winters over in this nest with her honey pots. In spring she lays a few eggs that hatch into workers which go out to collect nectar and to build the population up. Bumblebees are native bees that aid in pollinating our fruits and vegetables.

Gray and Green Tree frogs seem to really like rough wood boxes and other man made buildings. We find one in a house almost every year.

Save Our Bees Wildflower on Zazzle

We are blessed with several pairs of this lovely, golden yellow bird. Numbers have decreased in many areas due to habitat destruction, but here in southeastern Louisiana, they come back each year to nest in the boxes that we put up as well as in natural cavities in the wetland areas. We are proud that our efforts are paying off for this lovely uncommon species.

Buy Green Tree Frog in Pipe by naturegirl7 on Zazzle.com

Green Tree frogs seem to prefer the pipe that the house is mounted on. We often find them sleeping in pipes or clinging to plant stems. We are happy to see them, wherever they choose to live. This Louisiana state symbol is also a member of the natural pest control squad.

Please leave a remark before you take wing.