Birds of the Caatinga

Birds of the Caatinga

When people generally think of birds in Brazil, most think of brightly colored parrots soaring em masse above the rainforest trees. True in the Pantanal there are many birds to be seen that are spectacular but although not as well known, the Caatinga in Northeastern Brazil also has a wide variety of species.

The Caatinga is the area where I currently live on a small farm of 8 acres and we have recorded over 100 different species of birds. Seventeen of which have nested in our garden.

Although, perhaps not as brightly colored as some from the rainforest, this region has its fair share of unusual birds for those who are observant and patient. It is the birds from this region that I would like to share with you today.

Below is a photo of an Atlantic Kingfisher which my husband shot from a hide. The kingfisher knew my husband was there because it heard the camera and turned and stared straight at him. My husband was hidden behind a camouflage net he had erected. This was taken about 30 feet from our front door.

All the photographs, unless otherwise stated, were taken by my husband. All rights reserved.

This is just one of the three species of kingfishers we have. We see at least one daily either hovering above the lake, diving or sitting on the posts preening.

Although normally wary of humans, I have had one dive within 4 feet of me, whilst I was doing work on a tilapia cage, from a kayak.

Often we will find fish scales beneath a tree. This will be where the kingfisher has coughed up a pellet of things such as fish scales and bones that weren't digested.

What is the Caatinga

The Caatinga pronounced (caa tinga) is a Tupi Indian word meaning white forest. This area covers 8 states in northeastern Brazil, as seen on the map. The weather in this region is hot and dry or hot and wet. Often the scrub land plants will lose all their leaves appearing to be dead and only when the rainy season comes do things return to being green.

I have witnessed this here on our farm. After a sharp rainstorm, you can almost instantly see a shade of green appearing.

Although there are humid forests within this region, most is low scrub land with deciduous bushes and thorny shrubs. At times it appears a most inhospitable place for birds and other wildlife.

In the interior, farmers often resort to feeding their cattle cactus which grows in abundance just to sustain them until the rainy season begins again. 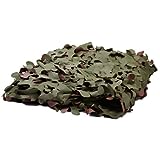 Camouflage Netting, Camo Net, Camouflage Net, Camo Netting, Size: 13ft x 5ft, Fire Retardant,
This is the type of net we use here on our farm. It is easily moved from place to place but adds enough of a barrier that the birds don't feel threatened.
Buy Now

Birdwatching is one of the most popular past times in many countries. Here it is something which has become a daily activity for us.

For me, I merely watch them but my husband prefers to photograph them. For this he has developed his own style and make-shift equipment.

One of the most useful things we have is the camouflage net. He will move this to various locations depending on which type of bird he is photographing.

The photo to the right, needs some explaining. This is the wall of our lake. What you are looking at are coconuts placed along the wall. The reason for this is my husband leaves these there so that when he wishes to photograph birds at the water's edge, he creeps down to the wall and uses these as a make-shift camera rest.

As luck would have it, these coconuts resemble my husband's balding head, and therefore when he is lying beside them, the birds don't see anything amiss.

The Great Egret is also a frequent visitor to our lakes. Normally it is here first thing in the morning and then again about 4pm. Although normally looking for fish, this egret found a tasty frog hiding in the long grass.

The availability of water brings many different birds including grebes, ducks, stilts, jacanas, herons, and more.

We do much to encourage wildlife here in our area. We have planted more trees that are suitable for nesting. We also keep some areas long and uncut whilst other areas are kept short and irrigated.

Some birds such as egrets and herons will move through long grass looking for food and yet others, such as those in the flycatcher family, prefer the shorter grass where they can easily spot insects.

Domestic animals are kept to a minimum. We noticed we had a sharp decline in wild water fowl when we had geese. As much as I liked having geese, we are aiming for a natural reserve for animals.

This is the same for chickens. If those are left to be free range, they will eat the insects that the wild birds thrive on.

These birds are one of my favorites here. I often open the door in the morning to see a dozen or so of them on the lawn. They are community nesters which means they have one nest between many birds. There may be a dozen eggs in the nest. Some won't hatch but the adults will take turns sitting on the nest and they all pitch in to feed the young ones.

If you've ever questioned whether birds and dinosaurs are linked, you only have to watch these birds. They are very dinosaur like. The hard surface on their beaks, we believe, is for assisting in rooting through bushes and plants in search of food. Normally at least one of the group will keep watch whilst the others hunt for food.

Resident and migratory birds in Brazil

We have resident birds and others that migrate through. Late in the year, as the interior of the country becomes dry, we get an influx of birds which come here and nest. Then when the rainy season begins they will return to where they came from.

We have had drought conditions now for two years and have seen the impact that this has had on the bird population. We aren't seeing birds that we commonly saw just a few years ago. One of the main sources of food for two species, the Limpkin and the Snail Kite, is snails. Due to many lakes completely drying out, the snail population has been drastically reduced and as such the birds which rely on this as their only food source also has been reduced.

How many species of birds do you see around your home and neighborhood?

Ways to encourage birds to your garden

You don't have to move to the tropics to attract more birds to your garden. There are things you can do that will draw birds to your area.