Pets of all kinds have shared Yvonne's life. They seem to find her when they are in need and she helps them find their forever home.

We feel that pets, especially cats, who choose you are the most precious. This lens is about Blaze Star, the cat (not Uncle Earl's honey) who found us one morning in September of 2003. She may be small, but she is packed with personality. We have shared our home with her ever since and she brings us such joy with her unusual and creative antics.

If you are thinking about getting a pet, we urge you to visit shelters and veterinary offices. There are many beautiful cats, like our Blaze, that need loving forever homes.

Blaze the Kitten Joins the Family

Blaze found us one day in late September, 2003. Al walked up to busy Hwy. 190 to get the paper (as he does early every morning) but on this special morning, as he took the paper out of the box, he heard a tiny meow coming from the deep ditch. Soon a scrawny little head popped up and the puny little kitten struggled toward him. She needed help and she must have sensed an animal lover, because Al was able to scoop her up and bring her back to the house. Apparently someone dumped her at an abandoned house, near the highway.

After a few trips to the vet and some nutritious natural food that I researched in library books, she began to gain weight and her coat began to shine. We found out that she was several months older than we originally thought and was so small from being undernourished while she was on her own. She is still a tiny cat and only weighs 7 or 8 pounds.

Louisiana has always had a colorful political history and politicians. Two of the most colorful were Huey and his brother, Earl Long. Earl was quite eccentric and fell in love with a long-legged strip tease dancer from Bourbon Street in New Orleans called Blaze Star. Since our agile little kitten had an orange blaze on her forehead, long legs and the longest tail we'd ever seen on a cat, we decided to name her after Uncle Earl's infamous girlfriend.

Blaze Makes Herself at Home

At the time, we had an old (about 13 years old) female cat named Amphi and two dogs, Rio and Chance. All were foundlings. Blaze was a bold little thing and showed no fear of any of our other animals. After a few days, she trotted into the front, with her tail held high, and made herself at home with the dogs. At first Rio, the larger dog would feign snaps at her because old Amphi was mean to him when he was young, but saucy little Blaze would just dart away, then come right back and curl up next to one of us. Soon, she and Rio were playing hide and seek and sleeping next to one another. She even made friends with cranky old Amphi and they used to play chase a little.

The Many Sides of Blaze Star

Blaze is our little clown and she brought such joy when she joined our household. She carries on conversations with us and is always telling on Dax, the youngest of our menagerie, when he bullies her.

I think she was a high-wire walker in another life because no ledge is too narrow for her to balance upon. She regularly climbs up onto a wooden screen, room divider to play and run back and forth while the larger and heavier, Dax, waits below.

Besides being a gymnast, Blaze also likes to model. She loves to pose for the camera and is forever creating the perfect photo op. She must have also been a successful model in another life, either that or an Egyptian Queen. They say that a picture is worth a thousand words, so we'll let her work speak for itself. 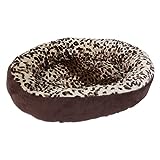 Aspen Pet Round Animal Print Pet Bed for Small Dogs and Cats 18-inch by 18-inch
Blaze and the other cats in our tribe love these soft round beds for their long cat naps. They're especially comfy in the cold winter. We have several of them spread around in different spots throughout the house.
Buy Now

Our Blaze is now the "older" lady of the house, but you'd never know it by the way she dashes around, throwing toy mice into the air. When she was a sickly kitten we tried an organic, natural diet which included vegetables and plain yogurt, so now she loves to eat her greens.

The Many Faces of Blaze Star

She enjoys long naps and during the winter she loves to snuggle on the couch in front of the fireplace. Blaze is not what you would call an affectionate cat. She likes to sleep close to you when it's cold and enjoys a good scratch under the chin, but does not seem to need to be petted like our other female, Star Noir. Actually, we're okay with that because one super affectionate cat in a family is quite enough.

After Blaze's successful line on Zazzle, she has become quite the shopping Diva and now boasts of her own shopping guide lens. Check out her Very Catty Christmas List article. She guarantees that it's better than the one the silly dogs did.

So now that you have met little Blaze, what do you think? Cute little cat, huh? And to think that someone just threw her away! We encourage anyone who is thinking about sharing their home with a furry friend to either adopt one from a shelter or get a free kitten from a vet's office

Because he will not turn away an animal in need, our vet, Dr. Maher, is swamped with kittens each spring. We know that there are many other vets all over the country, with the same ideals as Dr. Rusty, who need to find good homes for these little gifts from heaven.

Meow back at us, please.