Feline lower urinary tract disease(FLUTD) is the term often used to describe a range of problems manifesting as difficulty or discomfort in urinating. FLUTD ranges in severity from a mild irritation to a life-threatening emergency in cases of acute urethral obstruction. The causes of FLUTD include:

Cats with urinary problems are usually presented to the veterinarian when the owner notices their pet straining to urinate or possibly passing blood in urine. Sometimes the first sign of trouble may be when the cat suddenly develops a urinary obstruction, which is clearly a more serious situation.

However, it is also common for cats with FLUTD to be presented as suspected behavioural cases, when the owner may complain of the cat peeing in the house, often on clothes or the owner's bed.

FIC accounts for around two thirds of all cases of FLUTD seen by veterinarians. Diagnosing FIC depends on your veterinarian carefully excluding the other possible causes of FLUTD through laboratory testing and imaging of the urinary tract. Specific treatments medical or surgical treatment options are available for other causes of FLUTD, but the treatment of FIC remains challenging.

There are several theories regarding the potential causes of FIC, but none have been definitively proven. It is however clear that cats suffering from FIC have an abnormal stress response and demonstrable underdevelopment of their adrenal glands. It is speculated that this may be due to a developmental abnormality caused in these patients while in the womb and exposed to severe maternal stress.

As FIC is often the most challenging and frustrating form of FLUTD to manage, I have decided to focus the rest of this page on treatments which have been proven to be of benefit in cases of FIC. I am obviously depending on your own veterinarian having ruled out other potential problems before embarking on the following treatment regimes.

Feeding a prescription diet designed to produce dilute urine with reduced concentrations of minerals such as magnesium, calcium, ammonium and phosphate will help prevent flare ups. Dilute urine resists the formation of crystals and plugs of debris likely to cause symptoms of FLUTD. It is important the diet does not excessively alter the acidity of the urine. Speak to your veterinary surgeon about the diet he/she would recommend for your cat. At least some of the diet should consist of wet tinned or sachets of food, as the moisture content will again encourage urine dilution.

Increasing your cat's water intake is the most obvious way to produce dilute urine, but how do you encourage a cat to drink? Each pet is different, but many cats exhibit a preference for rainwater rather than tap water, particularly if the water is fluorinated. Collect water in a barrel or other suitable container to offer to your cat in his drinking bowl.

The type of the bowl is another factor which has been shown to affect the amount of water consumed. Aim to use a clear (glass or pyrex) bowl with low sides, ideally at least as wide as your cat's whiskers. Many cats prefer to drink in a certain position (eg on a countertop) and may be catered for by placing their bowl in this location.

Drinking fountains create interest in the water and are a great tool to encourage small frequent drinks of water. 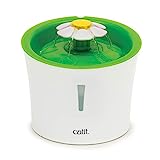 Would you say your cat with FLUTD is easily stressed?

By emptying his bladder more frequently, your cat reduces the opportunity for irritant aggregations of minerals and cellular debris to form in the bladder. Like most of us, cats do not like to be inconvenienced, and if a litter tray is not located nearby, your pet is unlikely to venture too far from his favourite resting place until the call of nature becomes overwhelming. Providing more litter trays at several different locations in your cat's environment encourage him to urinate more frequently and can help reduce the frequency of urinary problems. It is also important to avoid competition for litter trays within a group of cats, so in multi-cat households the rule of thumb is to provide one litter tray per cat, plus one as a 'spare'.

Some cats are more comfortable urinating in the privacy of an igloo-type tray, but personal preferences vary.

The key to treating cats with urinary problems is stress reduction. Particularly in a household with more than one cat, reducing competition for key resources is the most effective way to accomplish this. This means providing multiple toileting locations as described above, multiple feeding stations and resting places. While domestic cats will tolerate and even enjoy each other's company for periods of time, they are essentially solitary animals, and they should not be forced to share these resources unless they choose to do so.

For cats living alone in a home, the owner should set aside some time each day to play with the cat and provide a variety of toys for the pet to choose from. Scratching posts also provide entertainment, protect the furniture, and allow the cat to deposit pheromones in his environment which have been shown to soothe and relax anxious individuals.

Pheromones are chemicals secreted by animals to communicate to other members of the same species. Cats deposit pheromones using glands on their faces and paws through scratching and head 'butting' or rubbing. By rubbing his face against furniture or people in his own household, your cat deposits facial pheromones which comfort and reassure him in times of stress as well as making a territorial statement to other cats. Feliway is a synthetic form of a facial pheromone which can be used as a plug-in or spray in the home to provide a comforting 'background' scent which can calm nervous cats. It is often used in veterinary clinics to reduce stress in feline patients, but is also very useful in the homes of cats suffering from FIC.

Feliway is particularly useful at times of stress such as moving home (or even buying new furniture), or at the introduction of a new pet. 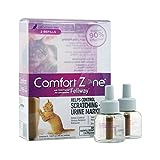 Summary of recommendations for FLUTD

Having ruled out other potential causes of FLUTD, cats with FIC should be managed through dietary changes, including offering wet food as part of the diet. Increasing water intake dilutes the urine and also encourages more frequent urination which is beneficial in preventing relapses of cystitis. At its core, FIC is a stress-induced disorder, and any steps you can take to enrich your cat's environment and reduce stress are likely to be the most effective measures to manage the condition. Synthetic pheromone products such as Feliway help to comfort and relax nervous cats and are highly recommended.

With a good deal of commitment and effort on the part of the pet owner, the effect of FIC on the cat's quality of life can be minimised.