There are different sources that state that the Great Dane breed originates from a variety of different places. Some say that th Great Dane is from Ancient Egypt, Greece, and Rome. While, others say that the dog was developed from the medieval boardhound or the Mastiff and Irish wolfhound.

The dog has beenin history for about 400 years.

Great Danes have been used as huntind dogs. They have, also, been known to take down wild boar.

They were seen alongside the horse and the raven, as holy icons to the kings of Denmark and England.

The Great Dane has been seen far and wide throughout Europe.

Because of their large size, Great Danes were once used as guard dogs, which at one time, caused their feard reputations. But, currently, the Great Dane is a beloved family member in many homes.

Great Danes can average around 100 to 200 pounds, and they can range a minimum of 28 inches at the shoulder blades. There are cases where individulars have measured over 40 inches tall. The AKC standard for the Great Dane's height is no shorter than 28 for females and 32 inches for males.

These dogs have very short, fine hair. And, because of their minimal coat, they are best at being housed indoors during the warmer and colder months of the years.

The Great Dane can have a variety of colors and patterns such as:

FawnBrindleBlueBlackHarlequinMantle (black and white pattern that resembles a Boston Terrier)

The ears can be cropped or left naturally floppy. When cropped, there are many occasions where the ears will still flop over.

Although the Great Dane is a very large dog, it is a friendly dog by nature. Great Danes are generally well behaved with other dogs, animals, and people.

This is a great breed for people of all ages, from the youngest child to the oldest adult.

But, as with any breed, there are some Great Danes that aren't quite the standard in temperament. Some Great Danes may have dominance issues and may be aggressive with other dogs of the same sex. And, sometimes, they may have an affinity to chasing smaller animals.

But, with a firm hand and steady training and socialization, you can overcome any behavioral problems and concerns.

Please remember that because the Great Dane is such a large, powerful breed, keep in mind that they may accidentally injure smaller pets and children, so monitor play times.

Great Danes, like most larger dogs, have a slow metabolism, which results in less energy and less food consumption per pound of dog.

Great Danes have health problems that are common to most large breeds, but with proper care and nutrition, they can live an average of 8 to 12 years.

Bloat (Gastric volvulus) is a common condition with Great Danes, as with other large breeds. It is a painful distending and twisting of the stomach that can be fatal if not addressed quickly. It is a commonly recommended practice for Great Danes to have their stomachs tacked (Gastropexy) to the interior rib lining during routine surgery such as spaying and neutering, especially if the dog or its pedigree have a history of bloat. Some claim that you can prevent bloatting by keeping food and water dishes elevated which should regulate the amount of air that is inhaled while eating. Other studies claim this will increase the risk of bloat. But make sure to refrain from strenuous exercise or activity immediately before and after meals, as well.

Another health concern that is common to the breed is hip dysplasia.

Some Great Danes may develop yeast infections, when not fed all needed nutritional requirements, which can then lead to recurring staph infection(s).

Great Danes can, also, suffer from several genetic disorders that are specific to the breed. For example, if a Great Dane is white near its eyes and/or ears, then that organ usually did not develop properly, which usually results in a dog that will be either blind or deaf. (Many pure white Danes are deaf.)

The founders of Three Dog Bakery was founded by two men and the love for a Great Dane. A white Great Dane, named Gracie. Gracie was both deaf and blind. She had several health concerns that caused for a special diet that Nutro, Science Diet, and other premium dog food brands, would not suffice. Her owners, had to come up with something special for her. They worked with their vet, and started small. Until they were able to create hundreds of different dog recipes to which they turned into a business and then a franchise.

Eventually, poor Gracie had to be euthanized, but a small Great Dane puppy was there to help her through. Of course with the other two dogs that the men owned.

You can read Gracie's story in Amazing Gracie by Dan Dye and Mark Beckloff. 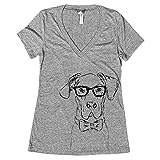 Pictures can be found at flickr.com.