We have been raising miniature dairy goats for over 12 years.

Their story began on February 17, 2018. It was a very cold and rainy day. Not ideal weather to be born in. Their mother is Clementine. Clementine was born on our farm. A few months after she was born we began to realize there was something different about her. Many times we would go outside and notice the herd had moved to the other side of the property and Clementine would be by herself. Then she would look up and seem surprised to be alone. One day a heavy rain storm hit and afterwards we went out to check fences and sure enough dirt had washed out from underneath the back fence and of course a few of the goats had found their way out to the woods behind the property. Clementine was one of them. Usually shaking grain in a bucket will bring them running back on the right side of the fence. All but Clementine came. We shook the bucket almost next to her and she did not react. Finally reaching under the fence and holding a cookie in front of her got her attention. We decided she is either very hearing impaired or completely deaf. That would explain why the herd would move on and she would not notice. She could not hear them! We decided that we would not breed her but she had other ideas. On September 15, 2017 she found a way into the boys pen and 5 months later gave birth to Mable and Dipper 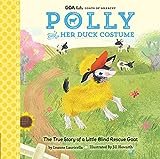 We do not normally have bottle babies. We prefer all babies to be fed by their mother. This is the healthiest way for them to be raised. Nothing can replace mothers milk. But occasionally there is an exception and Mable and Dipper were definitely exceptions. Luckily I was outside when Clementine went into labor. It was the quickest delivery I had ever seen. She never cried out in pain, just a few pants and pushes and there was Mable. I ran to get my daughter and a towel because it was very cold and rainy of of course she had the baby outside and not in one of the many shelters. By the time we got back outside here came Dipper.

Clementine walked away from both babies and almost seemed afraid of them. We tried for a while to get her to bond with them, but she kept moving away and/or stepping on them. It was a tough decision to take them from their momma but we saw no other choice if they were going to survive. So we moved them into the living room in a playpen and began mixing up the powdered colostrum gel hoping they would take the bottles. Luckily they started nursing right away with no difficulty. I got out my bottle feeding schedule that we very rarely have to use and got ready to bottle raise some babies.

My daughter picked out their names. They were named for a set of twins in a Disney Channel cartoon. They settled into life in the house pretty quickly. We had an old playpen from my grandson and granddaughter that worked perfectly for Mable and Dipper. We put newborn onesies on them to help keep them warm. Mable was so small even the newborn size was big on her. We had to change their onesies quite often to keep them clean and dry. Dipper did not mind it but Mable would yell at us every time we took it off, and would only quiet down as soon as she was dressed again. Spoiled already.

Even though Mable and Dipper had a bit of a rough start, they were healthy and very good eaters. For the first 3 days of all of our babies lives they are given 10cc of colostrum gel whether they are bottle fed or momma fed. It just gives them an extra boost of nutrition to help get them started off right.

After a few days we began taking them outside for just a few minutes at a time. The weather was still very cold but we wanted them to get fresh air. They stayed right by us and ran straight for the front door after a few minutes. True house goats!

The first week went off without a hitch. Both babies were eating great, bowel movements were normal (very good indicator of goat health). Week 2 Mable gave us a big scare. On February 23rd she seemed to lose her appetite. We don't worry if a baby doesn't eat much for one feeding, but she was not eating well for most of the day. Then she seemed to get hunched, her tail was down (major warning signal for goats not feeling well) and seemed to be in pain. Watching her we realized she was only urinating, not pooping. Checking my list of ailments and medications we have accumulated over the years we determined she was constipated. This was a problem we had never had with any of our goats. We followed the instructions we had, administered an enema followed by a dose of milk of magnesia. What followed was a sleepless night of constantly checking on baby Mable. She began going to the bathroom during the night and began eating normally by the 6am feeding. She had fully recovered and we could breath again.

On March 26 Dipper had his own medical scare. He stopped eating and was showing signs of bloat. Bloat is very serious in goats and if not treated will usually result in the death of the goat.

Bloat symptoms are lack of appetite, signs of pain such as grinding teeth, standing hunched up and tail down. The goat's left side will look bulged out and if you flick the left side it will sound like a kettle drum.

We always keep Bloat Release in our goat medicine cabinet. Before this we had only had to use it once. We gave Dipper a dose and an enema and began walking him around the kitchen. Keeping them moving is very important. And massaging their stomach to get the trapped gases to release. He finally began to pass gas then had a bowel movement and we knew he would be fine.

Constipation and bloat are problems that can happen with any goat young or old but more common with bottle babies. Sometimes overeating can cause the problem, sometimes they will have problems digesting either the formula or hay or grain when introduced. We only use formula made specifically for goats. When possible we will mix in goat milk if we have a doe available for milking.

Mable And Dipper Exploring And Meeting The Herd

On March 11 Mable and Dipper spent their first full day outside. We closed a gate and set up a small pen just for them. They could talk to the herd through the fence and meet everyone but they were not ready for physical interaction yet.

On March 17 we brought Almond Joy (one of our older goats that we call Grandma) and her daughter Chi-Chi into the baby pen. They are 2 of the gentlest goats and we thought they would be good to give the babies a chance to interact with other goats. Almond and Chi enjoyed it so much that I would find them waiting at the gate every day to go in with Mable and Dipper.

Every day the babies continued to grow and flourish and looked forward to going out to their pen every day. At dusk they would be waiting by the gate and as soon as I opened it they would run to the front door to go inside to sleep.

On April 23 Mable decided to get her horn caught in the fence. She got it out herself but when I went to feed them their grain and hay I found blood on her head and a very loose horn. We treated it 2 times per day with chlorohexidine and it healed up. She did lose the horn but it grew back just fine. This had only happened to one other goat in all the years of raising goats. These 2 babies were really keeping us on our toes.

April 27 was a big milestone in Mable and Dippers life. They spent their first night outside in their pen. I don't think I slept much that night. I knew they were ready to be outside but I guess I was not ready to let them grow up. They were after all my babies. But they did great and would be ready to join the herd very soon. We began opening the gate during the day to let the herd in and let Mable and Dipper go into the big pen and explore. The gate would be closed at feeding time and the babies would have their pen back for eating and sleeping. Sometimes Almond Joy and Chi-Chi would stay with them and at other times they would choose to stay with the herd.

We officially weaned them on May 14th. We had continued to give them a few ounces of formula before bed every night to make sure they were getting enough nutrition. After the scares we had with them health wise we were a little overprotective.

Mable and Dipper grew up enough to join the herd and Dipper has become quite the handful. Mable is very well behaved but Dipper is the exact opposite. He can climb fences and we have found him in quite a few interesting places. He has gotten on top of the kennel/shelter, into the grain supply and even on top of the roof. He is quite the daredevil but we love him anyway. Mable and Dipper will never be sold. They are truly part of the family

No Longer The Babies