Lion Hugs: Expressions of Love from The King of the Jungle

Rarely, do we consider that those fierce and dangerous have feelings. They have emotions, and the ability to love. Though they usually keep that love for their own kind, sometimes, when an animal grows close to humans - so close it accepts them as family - they hug. They hug and they kiss, and you can instantly see the love and friendship shared between the two.

Here you will find several such situations. Lions hugging - showing true love and caring for a human.

By the way, I don't know the story behind the zebra hug photo shown here. It seems to be roaming internet forums with words over it. I actually suspect it is not a hug at all, but a lucky freeze frame of an attack - but, hey, it caught your attention.

Watch Kevin swim with a lioness.

In 1969, John Rendall and Ace Berg purchased a small lion in a cramped cage in London and named him Christian. They exercised him on the grounds of a local church, and as he became larger, they prepared to re-introduce him into the wild in Africa. They did bring him to Africa, and one year later, the two men went back for a visit. This was their reunion:

A Lion Called Christian: The True Story of the Remarkable Bond Between Two Friends and a Lion
Buy Now

A Lion Called Christian: - The True Story of the Remarkable Bond between Two Friends and a Lion

This book was originally published in 1971, so it tells the story as if it were recent and without the decades of age and hindsight added.

It is a lovely and heartwarming story of Christian the Lion and features over 50 photos. Through the book, Christian grows from being a cub to a magnificent lion, and he travels

More About Christian the Lion

Learn more about this extraordinary lion:

The Australian interview is pretty good. The interview on The Today Show with Meredith Viera is not so great. Meridith asks how they feel about the video becoming an internet phenomenon. They say it is humbling, and then she asks, "What do you mean when you say it is humbling?". Uh, duh. Meridith, here is the definition of humble.

King of the Jungle Hugs & Kisses His Rescuer! - Cali, Colombia

Ana Julia Torres gets a hug from Jupiter, a lion she rescued from a life of malnourishment and abuse in a traveling circus.

Haley Joel Osment's character, in Secondhand Lions, befriends a lion that his offbeat uncles purchased in order to hunt.

This story has that classic blend of kitschy sentimentalism mixed with implausible action that makes for a sappy yet satisfying film. It's one of those movies you can't believe you enjoyed. Haley Joel Osment plays Walter, a 14 year old boy, in his most awkward years who is trying to grow up while still starving for love from family. His mother (Kyra Sedgwick) drops him with two totally eccentric and outrageous uncles who are living an old life of adventure in their heads, and a life of old age in reality.

This is the kind of movie you can watch with your family and everyone will enjoy different parts. It's a great film that I would highly recommend.

Another Hug from Christian

Zamba: The True Story of the Greatest Lion That Ever Lived 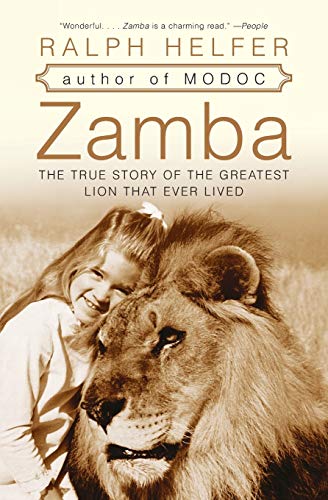 Zamba: The True Story of the Greatest Lion That Ever Lived
When Ralph Helfer, now one of Hollywood's top animal behaviorists, first began working, he was shocked by the cruelty that was accepted practice in the field. He firmly believed in "affection training" -- that love, not fear, should be the basis of any animal's development, even when dealing with the most dangerous of creatures. Then Zamba came into his life -- an adorable four-month-old lion cub that went on to prove Helfer's theories resoundingly correct.
Buy Now