What Killed My Betta Fish

One of my favorite pets is the betta fish. My little "Joey" was a great little fish. I could watch him for hours as he swam around.

Joey Was a Great Fish, But He Got a Disease

"Joey" Enjoyed Traveling With Us in His Own Aquarium

If your betta travels, this might work for you

After getting our betta, we thought that he would have to stay at home when we were traveling in our trailer.

This would involve finding someone to take care of him that knew how to handle bettas and would take the time to really clean him and properly feed him.

Since we travel in a trailer we decided that "Joey" would come with us, so we could make sure he was treated correctly.

Our travel solution was very simple........we purchased a small aquarium that had a lid on it, about 6H X 8L X 5W, just big enough for our one betta.

Then we took a piece of foam 4H X 11L X 7W hollowed out a space just big enough for the aquarium and BINGO, Joey had a travel home.

Sometimes you just have to be a little creative and come up with a solution that other people have not thought of. Your situation will dictate what you need to make your betta a world traveler.

A Small Tank Like This is What We Used for Travel 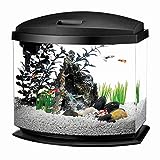 Aqueon LED Minibow Aquarium Starter Kits with LED Lighting, 1 Gallon, Black
When we hit the road in our small RV we decided to get a fish tank that could be wedged in between the front seats. That way we could make sure the tank was stable and wouldn't spill all over or drop to the floor. This size tank was perfect, the right shape and the dimensions were fit the spot perfectly.
Buy Now

Joey Was a Beautiful Little Guy.

Our Time With Joey Was Great

A little over 3 years ago, my wife decided that she wanted a pet for her birthday present. Of course, I jumped at this opportunity to get out of thinking up a gift myself and told her that we could go to the local pet store and find just the fish for her.

Our selection was a beautiful, vivid blue betta that was named "Joey". Don't ask me why she named it "Joey" but she did. Next step was selecting a small aquarium and all the rest of the necessary gear ($3 for the fish and $35 for the gear). My wife had selected the perfect place for her new friend, out of direct sunlight and in a spot where he wouldn't get knocked over.

For the next 2 years "Joey"lived in his place, he was cleaned regularly, fed on a regular basis and actually talked to a few times a day. My wife insisted that we take him when we went on vacation in our travel trailer, so we bought a small travel aquarium and put him in a foam cushion while on the road.

After a couple of years you get to know all the traits of your little friend, so when he started to show a change in his behavior, I quickly took note. I researched all the books and blogs I could find to try and figure out what might be wrong with him.

Keep An Eye On Your Betta Fish

Pay attention to your pet on a daily basis. They can get sick very quickly if you aren't watching them for tell tale signs. Any change in behavior can signify an illness or possible disease

Keep a Close Eye on The Health of Your Fish

All went well until a month before our last trip, about 4 months ago. "Joey seems to be getting fat" my wife told me and she pointed out how wide he was getting when viewed from the front.

We chalked it up to old age and decided to keep an eye on him, even though, in the back of my mind I had a feeling that he was getting sick.

About 3 weeks into our trip "Joey" started to get bigger again, even though he had not been getting any extra food.

His swimming was very different, he struggled to the top for air, stayed near the bottom all the time and almost rolled onto his back because of the large "belly" he had in front.

At that point I knew that our little "Joey" was a sick betta and I hoped that there was something we could do for him.

What Was Making My Joey Sick?

Hours and hours of research on diseases helped

If you are like me, you figure that "a fish is just a fish" and they shouldn't get diseases.

What a shock, when I did some research and found all the things that can make a betta ill. It was harder than trying to figure out what would make a child sick.

Here are some of the illnesses I found.

FUNGAL INFECTION...this happens when your sick betta has white cottony like patches on its body or head.

TAIL ROT OR FIN ROT...this one really scared me because the betta's fins and/or tail seem to be getting shorter and shorter. Fortunately, this was not happening with "Joey".

ICK ...I guess this one is pretty common, your sick pet has white dots all over their body and head, even eyes.

I spent a lot of time going through the various diseases, what they look like, the symptoms my betta would display, what could be done about it and on and on. Finally I came upon the betta disease that I thought our "Joey" had.

DROPSY ..."Joey had all the signs, an abnormally big belly , raised scales that look like an open pine cone. The sad thing was-----there was nothing we could do about it, this betta disease is a death sentence that happens in a very short time.

"Joey" Was a Friend to the End

He fought hard, hung in there, but this betta disease was too much for him

During the 3 years that we had him, "Joey" became part of our family.

When my wife or I passed by, he would come to the front of his aquarium, flap his fins, as if to say hello (or where is my food). He seemed to really enjoy it when one of us would stop, put our face near the aquarium and talk to him. The little guy appeared to know us and even got excited when the dogs passed by him.

We very rarely went on a trip without "Joey". Into his traveling aquarium he would go, tucked away in his foam container, all set to see the brand new world out there.

It was only a couple of days after we finally decided that he had the dreaded betta disease, Dropsy, that "Joey" passed away.

The sad thing was, we could do nothing about it. He was buried under a pine tree in New Mexico, we thought that it would be appropriate for him to give back to the earth, of himself.

Watch for Changes in Your Pet

Many people have one, two or three types of pets. Each of them need specific care related to their health. What works for a dog doesn't work for a cat or a fish.

To keep your betta fish healthy you need to know what types of diseases they can suffer from and what to look for if they get one. After my pet got sick I spent a great deal of time researching the diseases a betta can get.

Keeping an aquarium clean is only the first step in haveing a healthy fish. The type of food and the temperature of the water are also important.

Before purchasing a pet, it is best to get all the information you can on their care and feeding.

Learn all you can about the care of your new friend. Videos and books will help guide you on your road to education.

I can't say enough about keeping and eye on your pet, detect any changes and research what you see

My wife and I really enjoyed our little "Joey", he was a great friend in the house and a wonderful travelling companion. I wish I had known about all the diseases he could get before he got sick. I hope you can learn something from this article that will help you give your betta a long and happy life