Osprey: A Protected Bird of Prey

Once a Threatened Species, Ospreys are Back - that's good news for the rest of us!

When I was a kid, it was a rare treat to see an Osprey. These beautiful big birds of prey live almost exclusively on fish, and the widespread use of pesticides like DDT had gradually built up in the environment to interfere with the Osprey's breeding.

I have a vivid memory of my mother's excitement at seeing a huge messy Osprey nest, high up on a dead tree near the shore, and a pair of adult Ospreys busily carrying twigs and building it up in preparation for raising their young. The big birds of prey were an uncommon sight, back then, and it was years before I saw an Osprey fishing.

Nowadays, happily, there are any number of Osprey nests near my present home, and it's one of the great pleasure of spring to watch for the birds' return, to watch them dive so dramatically for a fish, and, in summer, to see the fledgling young Ospreys start to test their wings.

If you aren't familiar with the Osprey, read on to learn more about my favourite bird of prey. Don't miss the video of the Osprey in action, and links to a couple of nest cam sites that will have you hooked!

Since the banning of DDT use, Osprey populations have recovered to some extent in the United States, but the Osprey is still listed as endangered or threatened in some individual US states. As well, Ospreys are protected under Migratory Bird Treaty Act of 1918.

Quick Facts on the Osprey - a.k.a. Fish Hawk, Fish Eagle or Sea Hawk

There are many excellent sources of information about this bird species - see the Resources/References section below to learn more.

The Osprey Under Threat - A Story of Decline and Hope

The return of the Osprey is a good sign for the health of the planet. The Osprey is an indicator species - the proverbial "canary in a coal mine" - and the decline of Osprey populations was a clear sign that we were poisoning the planet.

What happened to the Ospreys?

What happened to make the Osprey start to disappear? Sometimes it can be hard to know what causes a big change in the natural world, such as the endangerment of a bird species, but in the case of the Osprey, the cause of the decline is well known.

In the decades following World War II, a pesticide call ed DDT was widely applied to fight insect pests that affected crops. It was also used for "cosmetic" purposes, against lawn and garden insects.

The poison made its way up the food chain, and in Ospreys this DDT residue caused a thinning of the eggshell. When the female sat on the eggs to hatch them, the fragile shells broke!

As a result, fewer and fewer of the baby birds were born to replace the mature Ospreys dying off through old age, predation, accident or any of the many other ways in which a bird can die.

Probably the only thing that saved the Osprey as a species was the long life span of these birds. Because the birds live so long, the populations had a chance to hang on - despite the drop in young birds getting hatched - until humans finally got wise and banned DDT use in much of the world.

Nowadays, the Osprey species is well on its way to recovery in many regions, such as the northeast part of North America. However, these majestic and fascinating raptors are still in need of attention and protection against human threats to their habitat and the environment.

Return of the Osprey

In Return of the Osprey, David Gessner focuses on the effort to save the Ospreys from the devastating effects of DDT on the breeding populations. In his second book on the species, Soaring with Fidel: An Osprey Odyssey from Cape Cod to Cuba and Beyond, he tracks the Ospreys on one of their migration routes - from Cape Code to Cuba, and back again.

Keith Bildstein, author of Migrating Raptors of the World: Their Ecology and Conservation, describes Soaring with Fidel as a "rollicking road-trip account of 21st Century hawkwatching [that] captures the essence" not only of the migrating ospreys but of the interesting humans who track the birds' migration. "Equal doses of Jack Kerouac and Roger Tory Peterson" make this a great piece of travel writing as well as a natural history book about a fascinating bird. 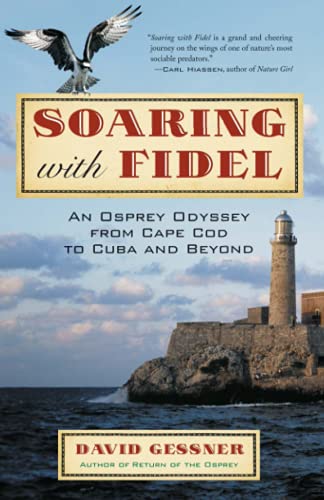 Soaring with Fidel: An Osprey Odyssey from Cape Cod to Cuba and Beyond
"This is not a bird book" says David Gessner, in his prologue. "Okay, yes, sure there are birds in it. Lots of them in fact. But it is not a bird book." So what kind of book is this, then? Among other things, Soaring with Fidel is a meditation on human nature and happiness, and on the amazing personal development that happens when we stop focusing on ourselves and give our concentrated attention to the natural world in which we live.
Buy Now

How to Identify an Osprey

There are several ways to know if the bird of prey you've been watching is an Osprey. First, of course, is the range and habitat - are you in a place where the Osprey is known to be found? Other ways of identifying an Osprey include:

Appearance: learn what the adult birds, both male and female, look like - and how the young (juvenile) birds are different in appearance from their parents;

Voice: Listen for the sound of the Osprey. Further down on this page you'll find a link to an audio recording that will help you learn what this bird sounds like.

Nest: You'll know for sure that you're in Osprey territory when you spot one of their distinctive nests. The huge messy-looking nests, high up in tall trees (often in dead trees) or on man-made structures like bridge superstructures and power line pylons or towers, are unique to the Osprey. They return every year to the same location, if they're able to do so, and keep repairing and adding to the older nests. After a number of years, an Osprey nest can become a huge construction!

In the photograph above, a juvenile osprey is stretching its wings as its parent looks on. This is a pose that beautifully shows off the bird's distinctive markings, and also a familiar sight to those of us who are fortunate enough to live near a place where a pair of ospreys have chosen to take up residence, nest, and rear their young.

When the wings are outstretched, we can also spot another distinguishing feature. Ospreys can look a lot like eagles from a distance, at first glance, until you notice the bend at the "wrist" of the long narrow wing.

Adults are dark brown in body color on the top, with a white belly and face, with a distinctive dark stripe that runs from the base of the beak across the eye to the back - almost like a mask.

Close-Up Photograph of an Osprey's Face and Beak

Above, a striking close-up photograph of the osprey's face - its beak streaked with the remains of its most recent meal - shows the mature raptor's distinctive sharp yellow eyes, as well as the brown feathers that create the effect of a mask.

The head and upper breast of the adults are often streaked brown, more so in the female Osprey than the male and in the Australasian subspecies than those of other continents.

The immature Ospreys look very much like the adults, once they stop looking like weird leathery little dragon babies and get some size and some feathers.

The juveniles have a buff tone to the underparts and edges of back and flight feathers, but they are more easily distinguished by the barred or checkered appearance of the under wings - as the photograph above clearly shows.

While the adult Ospreys have the clear golden-yellow eye color we associate with raptors, the juveniles start out with a red-orange eye color, like the young bird in the photograph above. Very unsettling!

Hear the Voice of the Osprey

The Osprey's call is sometimes described as a whistling chewk, chewk, chewk. For a big fierce-looking bird, this is not a very loud or very impressive voice! If an Osprey feels threatened, however, its alarm calls will carry for quite a distance. When frightened by intruders near the nest, the female Osprey's cry is a high-speed pew-pew-pew, while the male makes a shrill, almost frenzied chereek, chereek sound.

Click here to listen to the Osprey's call
(This short Pandion haliaetus audio clip is in the public domain. It was recorded by an employee of the US National Park Service and is made available here via Wikimedia Commons.)

Is This the World's Biggest Osprey Nest?

Osprey Nests are a Big Mess!

Okay, maybe the Osprey nest in the picture above is "over the top"... but it is true that Osprey nests are easily spotted, quite distinctive. You almost have to wonder how the apparently random mass of sticks can stay together at all.

Osprey nests are large, and the older they are the larger they get, as the spring-returning birds will add more material to a nest while they repair it from the ravages of winter. That means, as years go by, a nest can keep getting larger and larger, unless it's destroyed by bad weather or vandals.

Ospreys tend to build their homes set up very high in prominent locations (such as on the very top of dead trees, on the towers that carry electrical lines across country, on tops of chimneys and smokestacks, etc.) where the birds can have a good view of potential prey and potential predators.

The best way to find an Osprey nest is simply to scan the skyline and look for a straggly mess of twigs with a large bird of prey on top - and possibly the silhouette of a juvenile perched on the edge, stretching its wings in preparation for that first perilous flight.

You'll also find some brilliant photographs of juvenile Osprey and excellent information on this fascinating bird of prey at the Dyfi Osprey Project website of the Montgomeryshire Wildlife Trust, Wales.