Let's face it: some dogs are pampered. Not everyone can make their dog an heir to millions of dollars or purchase a life-sized pet mansion valued at $300,00 (like Paris Hilton did), but will all have a desire to treat our dog right. Here are a few outrageous gift and cheaper alternatives to keep your dog looking like a million bucks even if you don't have that much! (Who does anyway!)

American's aren't the only group who love to pamper their pets!

♡ Dogs and their wild predecessors have been found in prehistoric burial sites suggesting the long standing relationship between dog and master.

♡ In Germany, Great Danes were breed to be Chamber Dogs or Kammerhunde. These pampered dog lived inside and wore royal apparel, including gilded collars decorated with fringe and padded with velvet.

♡ Many the Queen of Scots apparently had several dog beds made from red velvet for her Skye Terrier lap dog, which remained at her side through her execution.

♡ In 2007, the infamous billionaire and "Queen of Mean" Leona Helmsley left her Maltese bitch named Trouble an inheritance of $12 million, which tops the sums awarded to her two grandchildren.

Modeled after Paris hilton's own mission-style mansion, this custom dog mansion cost $325,000, including air conditioning, a crystal chandelier, miniature furniture from Philippe Starck and so much more! 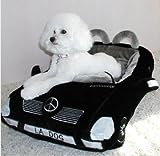 Who To You Feel About Luxury Pet Gifts?

How much is too much!

People take pride in their genuine designer duds and so do posh pups. Make the ultimate statement by giving your dog the best of the best. I'm not talking about name-brand dog chow. How about a hand-made leash, a diamond dog collar from Harrods or a two-story doggie bunk bed. It's enough to make other dogs jealouse!

LazyBonezz Metropolitan Pet Bunk-Bed, Espresso
Who wouldn't love this stylish bunk for themselves let along their dog! Designed for two pups, this deluxe doggie bunk features two levels with a 30 pound weight capacity each. How awesome is that!
Buy Now

If you can't afford the real deal, you'll love the price of these affordably glamorous alternatives. It's a great way to get all the bling for half the price. You dog won't be able to smell the difference and neither will any other dog owner. But your wallet will. It can be your little secret. 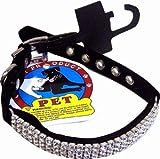 Dog Collar w/ Rhinestone Diamonds Blinged out 4" along the Collar and Satin Brass Buckle .51" x 11.8" Black in Color
For edgy girl dogs and sexy boy dogs, this crystal collar is a little naughty and a little nice. GRRRRRAAARRR!! It's even available in pink for your doggie princess. This collar is so cute, I would even wear it!
Buy Now

Every dog and dog owner knows that smelling good is just as important as looking good. We just have different definitions about what good is. My dog for example, thinks that a dead frog smells absolutely delicious!

Plush Toys and Other Luxurious Perks

For dogs who live in the lap of luxury, the perks aren't limited to doggie perfume, diamond collars and plush furcedes. These dogs need luxurious toys to sink their teeth into. If they going to play and chew, it might as well be with a Chewy Vuitton bag instead of your designer accessories!

How Much Do You Spend?

Let's answer this honestly. How much is the most you would spend on a single dog toy or pet item? 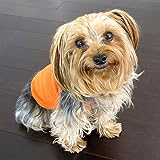