History of the Pomeranian

The modern-day Pomeranian is the descendant of the sled dogs from Greenland and Lapland, which were brought to Pomerania, which is in Europe. The breeders in Pomerania improved the breed's coat. They, also, bred the dog down to a smaller size for city living.

The dogs were about 20 pounds when they reached England. There, English breeders, reduced the size further. They are the breeders who are responsible for the different colors the Pomeranians now come in. 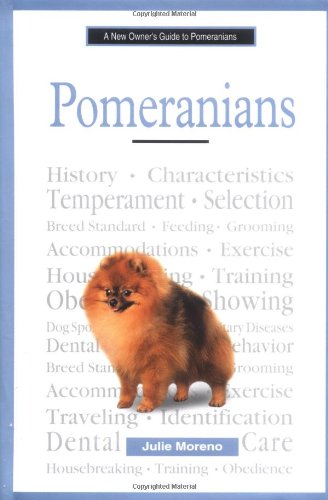 Pomeranians are very active dogs. They are intelligent, courageous, and very loyal.

Despite their size, this breed enjoys to walk, which make them great walking companions.

Pomeranians are confident, commanding, and outgoing.

This breed is not recommended for families with smaller children because them can become temperamental and a little nippy.

Pomeranians make excellent watch dogs and will sound a bark when they sense danger.

The Pomeranian is lively and eager to learn. On average, they get along well with other household pets if given a proper introduction.

Pomeranians love to just hang out in your lap, so they truly are a lap dog.

The breed can live well in an apartment and a house with a small yard, but do remember they like to walk...

The average Pomeranian ranges in weight from 3 to 7 pounds.

They have two coats- a thick, fluffy undercoat and a straight, coarse top coat.

Although rare, but the Pomeranian can, also, appear in beaver, brindle, chocolate sable, white, and wolf sable.

Pomeranians often live an average lifespan of 12 to 16 years, but it's not impossible for the breed to live 18 to 20 years.

The most common health problem in Pomeranians is luxating patella.

Patent ductus arteriosus (a congenital heart defect) and collapsing trachea have become serious problems in the breed, as well.

Dry eye and cataracts, are also, common in Pomeranians.