I love to share the experience I have gained over three quarters of a century, be it useful tips, love, jokes or technology.

At first she was very nervous, and spent a lot of time outside, often sleeping in her box in the shed, or hiding under the kitchen table.

She still likes to spend a lot of time in the garden and in the vacant land beyond, but always comes home to sleep indoors

Here she is playing in her box

She was about four months old here

In summer 2008 I built a cat's playhouse, made out of a series of interleading cardboard boxes with holes cut out to form tunnels and linking hidey-holes. She loved that.

She still loves boxes, and her current favorite place to sleep is inside the box where I am storing my Christmas presents. Not ideal, but better than sleeping on my black fleece jacket, which she does whenever she gets the chance, leaving white hairs which are hard to dislodge.

Our Adopted Cat was a Master of Silly Poses

Look at her endearing little face

This photo was taken in in Autumn 2008 and she was beginning to be more playful and less fearful.

But she would still jump if there was any unexpected sound.

And she was terrified of small children who wanted to grab and cuddle her. She would scuttle away and hide, and not come out till she heard the front door go. She hated being held, and would never allow herself to be picked up without struggling to be released.

She still doesn't like noisy people, and hides under the table when they come. Occasionally, as a treat, she allows me to pick her up and hold her for about half a minute, but I do risk being bitten if she's not in the mood.

She used to sleep for about eighteen hours a day, but, like babies, kittens do seem to want a lot of sleep.

I love the way her white fur blends in with the white duvet on our bed.

Don't You Want to Tickle That Furry Tummy?

It's all right, Pussums loves to have her tummy tickled

It even includes a drinking saucer.

You will need a cat carrier whenever you take your cat to the vet. Hopefully this won't be too often, but some people like to get the vet to microchip their cat in case it gets lost, stolen or injured. This enables people to find the owner.

Then some cats start scratching profusely. It starts with fleas or ticks, but if these are not killed off with appropriate medicines, the cat might develop a skin allergy to fleas. This could cause it to start biting at the itchy bits, pulling out chunks of hair. This is what happened to our cat Pussums, but she got better almost immediately after the vet gave her an injection.

Of course there are more serious cat diseases and injuries, but I can only tell you about our Pussums. I do know that one of our previous cats had bad gum disease and we were told to make sure the cat eats cat biscuits as well as soft food, as this is good for them and helps prevent gum disease. 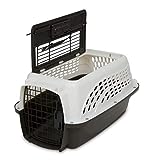 Petmate Two Door Pet Kennel for Pets up to 15 Pounds, White/Brown, 19" Long
If you need to transport your cat to the vet, or on holiday, this is a nice sturdy pet carrier. Secure lock and all-round good visibility so that you can check your pet is safe and comfortable
Buy Now

Our Adopted Cat Pussums at The Window - See the garden outside, and the open space beyond - cat's paradise

This is our cat's favourite viewpoint when she is indoors. And, until recently, the table was the only surface she was allowed to climb on to - we trained her not to go on any kitchen surfaces or shelves where we have our knick-knacks.

She was reasonably good, but occasionally in the night when we were not with her, we would hear something being knocked over (usually a plant pot) as she ran around trying to catch moths.

Unfortunately she has recently become very naughty, ignoring her training and jumping up onto any surface she can find, knocking down papers and ornaments, and stealing food if she discovers anything left out on the kitchen counter. I don't know why her behaviour has changed so much, but she's a bit of a menace now.

Gift Ideas - I designed these products on Zazzle

And here's a Ginger Striped Cat on an iPhone Case:

Why Would a Cat Want to Sleep in a Dish?

Ask Pussums, as this was her favorite bed for a few weeks, earlier this year.

Then she had a spate of sleeping on the bathroom stool (close to the central heating, so that was understandable).

Then for a few weeks she took to sleeping on top of a woven storage box.

Her current favorite sleeping place is on a book shelf, tucked in surrounded by CD's and ancient tapes. It looks grossly uncomfortable, as the sleeping area is quite small, but she seems to like being up high, looking down on us when she deigns to wake up.

Finally, Here's Pussums on Top of Our Compost Bin

She says It's nice to know you've visited here

Of course you do, otherwise you wouldn't be reading this!