Rottweilers, as a breed, are ancient, being recorded as far back as the Roman Empire. There, they traveled with the legions as working dogs who herded cattle. (Yes, the Rottweiler is a herding dog.) During this time, the first true Rottweiler was known as the Roman War Dog, but when they met with local sheepdogs and other dogs with the molosser (mastiff) breed characteristic from England and the Netherlands, the breed began to shape.

The Roman cattle dogs protected the cattle from both robbers and wild animals, but by the end of the 19th century, their numbers were declining so far that in 1900, there was only one female in the town of Rottweil.

But, upon World War 1, the military needed, a sort of, police dog, which led to the uprising of the Rottweiler. And, from that time on, the breed became popular with dog owners, and in 1935 was officially recognized by the AKC.

One of the more popular misconceptions about the breed, due to its large, muscular appearance, is that it originally was bred as a fighting breed.

Rottweilers are a fairly large breed ranging from 22 to 27 inches at the withers (shoulder blades) and weighing an average of 95 to 110 pounds.

They are known for their short black hair and tan markings above the eyes and on the feet. They are moderate shedders. And, surprisingly, come in two varieties- short and long hair. The long haired rottweiler is not necessarily rare, but not as commonly seen as the average short hair variety. The long haired rottweiler is more commonly seen in native German Rottweilers. The long hair Rottweiler, is only considered as such, since the hairs are longer than normal, slightly resembling the coat of an Australian Shepherd. DNA testing can determine whether or not a Rottweiler carries the gene for long hair.

The dog should have a deep chest that reaches to the elbows.

The back should be straight and not curved.

The Rottweiler's tail is generally docked. It is presumed that the tail was originally docked to prevent breakage and infection if it was covered in mud or debris in the pasture. Another theory is that working dogs had their tails docked to avoid a "tail tax," the method of counting livestock via the tails. To this day, the tradition of docking a Rottweiler puppy's tail is continued, usually docking it at the first joint. (Side note: it is currently illegal to dock tails in many European countries, Mexico, and Australia.)

Rottweilers must be at the hands of a responsible owner, who is willing to properly train and socialize them, as without this training, a rottweiler can become a danger to one's family and friends. But, with proper training and socializing, the breed can be a very reliable and loving addition to the family.

In general, Rottweilers are fond of children, devoted, eager to please, and intelligent dogs. They, typically, catch on to training easily.

The breed is playful and they may demand attention from their owners, at times. If they do not receive the proper mental stimulation, the breed can find both inventive and destructive ways to carry out what they lack from their owners, on their own...

They are not normally barkers, unless they perceive a threat is near.

The breed can be a very good at protecting its family, as it is a steady dog with a self-assured nature. But, at the same time, the breed is stubborn and strong-willed. A firm, fair, and consistent owner is the best owner for this breed. 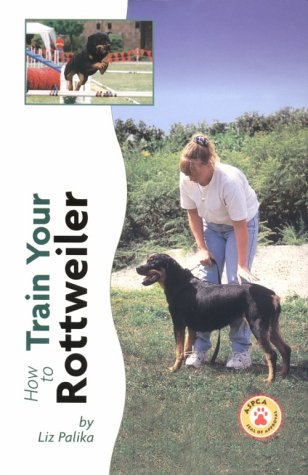 How to Train Your Rottweiler (Tr-104)
Buy Now

You must remember the key to living happily with any Rottweiler is early training and socialization (with people, animals, and new environments). As otherwise, the dog may assert his dominance towards you and your family, which can cause a problem due to the dog's large size. So remember an untrained, poorly trained, or abused Rottie, can become aggressive and destructive, which can cause a physical threat to humans and animals.

But, at the same time, they can be gentle breed

The Rottweiler is a relatively hardy breed, that can live an average lifespan of about 8 to 11 years with the proper care and nutrition that it requires. But, one must be aware of the potential health concerns that do surround the breed.

Rottweilers are prone to having serious diseases mainly relating to the hips, such as Hip Dysplasia.

But, other common health concerns may include:

Rottweilers can also encounter other health concerns such as hypothyroidism and gastric torsion (bloat), as well as various allergies including food and sking allergies..

As a large breed dog, Rottweilers should have their hips, elbows, heart, and eyes, tested by a veterinarian, especially before choosing to breed them.

You may, also, consider having a DNA test performed in order to screen for von Willebrand's disease (vWD).