How to Teach Your Parrot to Talk

Teaching your parrot to talk

One of the reasons that draw some people to get a parrot as a pet is the possibility of learning how to teach your parrot to talk. Parrots are unique in the animal kingdom as being the only animal that can literally mimic sounds, including human speech, in a way that might even make you think they know what they are saying. Although some parrots are highly intelligent, it is debatable if they actually know and understand what they are saying or not!

However, It can be highly amusing and fun to hear your pet bird say words or phrases. Teaching your parrot to talk can take a lot of training and patience though, and some birds learn better than others. Depending on the age and socialization ( with other birds) of your pet, he/she may not even learn at all in some cases, but it would still be fun to try, right?

Also, some species are better at this than others.Some of the best talkers are African greys,Yellow-naped Amazons and mynah birds, (although mynahs are not of the parrot species). These birds can collect extensive vocabularies, and are very popular among serious bird people who like talkers. Also, the more common Budgie or Budgerigar ( also known as a Parakeet in the USA) can be taught to talk, and are a much less expensive alternative to bigger members of the parrot family.

It is recommended that you start them early if you are trying to teach a Budgie to speak. If they are left to spend too long in a petshop situation for instance, they tend to be very noisy and chattery instead of the nice talker you might like. This is due to learning too much bird language from their siblings and hence they tend to be much noiser and not pay attention to lessons.

Petra talking to an Alexa 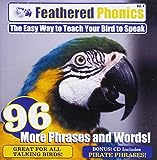 Some good medium to small sized talking breeds of bird.

Some very good popular medium-sized talking birds are Indian ringnecks, Quaker parakeets, male cockatiels, blue-crowned conures, and chattering lories, but the best ( and most affordable by far!) small talking bird is the Budgie. Budgies, also known as parakeets, have been known to say hundreds of words and phrases in some individuals.

Some other types of parrots that are easy to teach to talk.

If you can provide them with their nectar diet, lories are excellent talkers. Like the Senegal and Meyer's parrots, African Poicephalus parrots may learn to communicate, however their sounds are difficult to understand. The Pionus parrots, of which Maximillian's Pionus speaks most clearly, are the same. 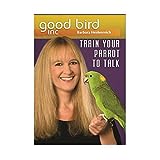 If you would like a talking bird, you have much more likelihood of success if it's a single, young bird. You'll have to talk to it regularly, as in, repeating the same word over and over, being clear and precise yet simple, nothing too complicated,. Choose a simple word like " hello" or the birds name.

How to train a parrot to talk

Don't move onto the second word until they have mastered the first, you don't wanna confuse their crazy little parrot brains!

It's also a good idea that only one person trains him to talk, otherwise the sounds of different voices will confuse him when you're trying to have him pick up on a word.

Some people say that you should avoid teaching your bird to whistle until it learns to talk first, as once it learns to whistle it can get carried away with whistling all the time.

Rewarding your parrot when he talks by giving him a treat can sometimes work wonders.

Often some of the better talkers will learn words or sounds all by themselves, they can mimic things they hear on tv or radio or in conversations, as well as sounds such as telephones.

Will your bird be a talker or not?

If your pet bird is a naturally talkative species and is still young, it is most likely to communicate. Furthermore, if you or your family are a verbal household, your pet bird is more likely to talk. Finally, if your pet bird speaks or imitates noises, you'll have a high possibility of teaching it things.
Any of these parrots may or may not be able to learn words. The ability to "chat" with our parrots is a plus, not a must. It's worthwhile to work with your pet bird to improve its capacity to communicate. Remember that even a non-speaking pet bird may communicate and comprehend what you're saying.

If your bird fails to be a " talker" don't be upset, he's still an intelligent animal and just because he can't communicate in sounds us humans recognise doesn't mean he (or she) is any less intelligent or lovable!

If you have success teaching your parrot to talk, leave a comment, I'd love to hear about it!