The Story of Buster Brown

This is the story of Buster Brown. We took him in when he was a kitten and found a home for his sister who looks a lot like him.

Buster is no longer with us, but the two years that he was he brought us so much happiness, laughter and smiles.

I have never seen a cat like Buster in my life and probably never will see another like him. He was unique and so much fun.

It is rare that you meet a cat with as much character as Buster Brown.

This is the story of his life.

This is Buster and his sister - Stray kittens

This is Buster Brown and his sister Molly Brown. Don't ask me why we always seem to give our animals a last name!

Anyway when we first saw them there were three kittens with no mother. I saw them in the middle of the road licking a fast food bag that had blown out of someones garbage. A car literally had to come to a full stop to keep from hitting them because they really had no clue of their danger. So I got the out of the road and seeing how starved they were, I had to feed them.

As you can see although they looked alike, Bust had blue eyes and Molly has green eyes. I didn't get any photos of the third kitten, she looked different than these two. But they were all adorable.

Molly Brown went to live with a co-worker, and the third kitten disappeared after a couple days. We are not sure if she found a home or what.

No matter where he was

When we came home or out the door, Buster Brown would come running and go with us.

Hours upon hours he would sit and watch the squirrels

Buster used to stalk the squirrels in our yard. One day when I was out trimming the lilac bushes in the yard I watched him putting the sneak on a squirrel.

He slinked really low to the ground, frozen in time. Not moving a hair on his head or even a twitch of his nose when the squirrel sitting below the tree looked at him. I honestly think he was even holding his breath.

When the squirrel would turn away looking for nuts that he buried in our grass, Buster would sneak closer and closer.

I remember thinking "Buster, you are never going to catch that squirrel".

He got within five or ten feet of the innocent little squirrel who had his back turned to the dangerous Buster Brown.

Suddenly like a bolt of lightening, he closed the distance and made it to the squirrel who had no clue he was coming. He got right up to the squirrel and seemed to freeze, he didn't know what to do, I think he was thinking the squirrel was supposed to run. He stopped and instead of pouncing, just stood up on his back feet and swatted the squirrel on the butt softly, then the chase began. It ended with the squirrel up the tree and Buster at the bottom looking up at the Squirrel.

Oh my gosh I laughed so hard at his surprise when that Squirrel did not run.

Below are some pictures I took of him and some Squirrels on another day.

The day Buster Brown went up the chimney

One day we were sitting in the living room watching tv, when Buster Brown walked over to our fireplace.

Now our fireplace hasn't been used in 20 years by us, but it must have been used by the people that owned our house before us because it still has a lot of black soot up the chimney walls inside of it.

So we are sitting there watching Buster Brown looking into the fireplace, he looks up, then all of the sudden he just jumps up into the chimney. We sit there for a few seconds waiting for him to land back down and he doesn't come down. He just disappears, like a feline Santa Claus. He is gone!

We are both laughing and calling him. All the sudden he jumps back down and this previously gray cat is black with soot. Oh my gosh, we laughed so hard, it was hilarious!

Here is a photo of the sooty Buster Brown after he came out of the chimney.

Starting from Scratch: - How to Correct Behavior Problems in Your Adult Cat

Starting from Scratch: How to Correct Behavior Problems in Your Adult Cat
Buy Now

Buster love to get into things

Buster love to get into things.

If we weren't paying attention to him, he would open doors on the computer desk and start pulling things out.

He would up to my bookshelf by the back door and start systematically pulling the paperbooks off the bottom shelf.

He also loved to watch me fly into the kitchen when I heard him open the door and get into the pans. Yes, we had to wash the pans before we used them because of him!

But he was just so danged cute when he got into things, you could tell he was just wanting our attention. I could call him off of anything, or out of anything and he would come out purring wanting petted.

Here is a photo of him in the dryer, he loved warm places.

And him playing Tabby who also likes to get in things, she is in the gift bag.

Please, clean up Antifreeze spills- Buster drank some at our neighbors, the vet could not save him.

Buster Brown loved to play with anything and everything he could get his little paws on. He would chase the laser pointer for hours. Attack imaginary things in the yard. Play with leaves, blades of grass and the beans off of our tree. Every animal loved him as much as the people in his life did. He would rub up against my daughters Boxer and she would push her nose on him, if she got too rough he would box her with his claws in and she would poke him with her nose harder. They loved each other so much.

He was the only cat I have ever met that seemed closer to being a dog. When I went out in the backyard with my little pom, Buster would go with us. When we got ready to go in I would tell him "lets go back in" like I do with my dog, and he would follow me back in the house just like the dog.

He loved to climb up on our chain link fence and he was so chubby it would scare us because he would walk along the top and he always seemed more clumsy than graceful. But he never fell off.

He also loved to torment us by scratching the young maple tree that Katie, our daughter, bought for her dad for fathers day. He would sharpen his claws on it, we would chase him off. Turn around to walk back to the house and there he was back scratching it again.

Oh my gosh was he ever naughty. We put a little decorative fence around that poor little tree and he walked up and looked at the tree, then stood up on his back legs and leaned far over the fence until he was high centered. He backed back over the fence and then took a leap and landed hanging from the tree. We had to run and get him off of it, laughing so hard. The little poop!

We finally ended up putting something around the bottom of the tree to protect it from him.

Buster would have loved this cat toy 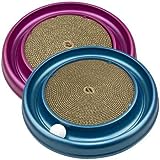 I didn't realize how therapuetic it is to write a story about a pet that touched your life. It brought back so many wonderful memories of Buster Brown. I hoped you enjoyed it too.

I miss Buster Brown, but am thankful for the time that we had with him in our life.

Honestly he was one of those cats that made us laugh or smile every time we looked at him.

I hope that you will consider giving a stray cat or dog a home as there are so many that need them. I can honestly say that they give us more happiness by choosing us!

Please drop a note below so that I know you stopped by,