You may not think that an 9 lb dog could destroy a dog toy. You would be wrong. My 9 lb Jack Russell Terrier has chewed through the toughest of tough toys. Those that have survived are amputees.

Some dog toys have out lasted the pack. These are my recommendation, and Misha's, for dog toys that will survive your tiny terror.

When I got Misha, I had a ton of dog toys left over from my previous dog. Sierra died just before her 14th birthday and hadn't really played much with toys over the last few years. Many of the toys Misha inherited were at least 5 years old.

She didn't do much damage until she went through the teething stage. Then it seemed no dog toy was safe. They lost limbs, had their stuffing ripped out, and were generally beyond my ability to patch up.

Once she got through that stage, the toys had a better chance. Still, she sometimes gets in a mood and then I'm back to sewing on limbs.

Some toys have done a better job of holding up even through her worst chewing stages. Some of those toys are even still around. This top ten list highlights those we think are the toughest.

These Will Survive a Jack Russell Terrier 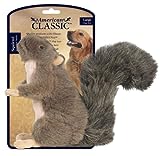 American Classic has a line of wildlife stuffed animals that are top quality. There's a chipmunk, mallard, rabbit, fox, and so forth. You would think dogs would like them all equally. Well, you are wrong.

I bought Sierra the squirrel when she was a couple of years old. It was one of the few toys she ever played with. When I got Misha, she adopted that squirrel and instantly fell in love with it.

For the first few months, it was bigger than she was. She didn't care. She dragged it around by it's tail and nibbled on its paws. She loved to sleep side by side with the squirrel.

It was a terrible day when poor Mr. Squirrel had too many holes and I couldn't sew him up anymore. I had a difficult time finding a replacement. Local stores didn't carry them anymore. For awhile, she had to be satisfied playing with her cousin's squirrel when she came for sleepovers.

Thank goodness for the internet! I was able to find one on Amazon. It's been by Misha's side every since. Other toys come and go, but the squirrel gets played with every day.

This is a durable dog toy. Though it has arms and legs, they are sewed pretty securely. The material is thick and doesn't tear easily. It has stood up to serious chewing and pulling. 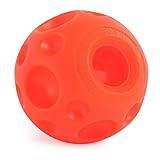 I've bought my dogs several treat dispensing toys over the years. None is as durable as the Tricky Treat Ball. It's made of a durable thick plastic that can stand being dropped on the ground.

Misha has two Tricky Treat Balls--a large one and a small one. She loves the large one the best. She's somewhat of a Hercules and can pick the large one up in her mouth. It's funny to see her carry it around.

#3 The Booda Hedgehog Is Love by All

Without a doubt, the Booda Hedgehog is one of the most well loved toys in the toy box. I have yet to find a dog, big or small, that didn't like these. Whenever my siblings bring their dogs over, they are drawn to the hedgehog like a magnet.

They are easy for a small dog to pick up and there are no small parts to chew off except for the black felt "hands and feet". Misha has a large one and a small one. It's a riot to watch her play with the large one since it's wider than her legs.

For the dog owner, the Hedgehog is a great pick. Because there are no thin appendages sticking out, there is less to destroy. It's also very easy to sew back together. A great pick for the money!

Misha and the Hedgehog

This puzzle can be pretty challenging for some dogs. It can take them awhile to figure out out how to move each of the moving parts. It is one of those toys that can occupy them for quite awhile.

The Junior Bungee Dog Toy is our favorite pull toy. This bungee toy has an elastic body that adds a little extra to tug of war. It's long enough that you can keep your hands on one end and the dog's mouth at the other. It has a rattle and a squeaker to keep your dog interested.

I've had this toy for about 10 years. My Lab played with it first. Not only did she tug on it with me, but with another dog. It's Misha's now. She has tried to chew it up, but has only managed only to remove a leg and the nose. It has held up to the chewing and the pulling very well.

Is your dog tough on toys?

Tiny Dogs Can Be Destructive

I had a Lab who barely harmed her toys. As a pup she was pretty destructive. But, once she was about 3 years old, the toys were pretty safe in her possession. She was very gentle with them. A couple of the ones I bought when she was a puppy were still around when she died at the age of 13.

Now I have a Jack Russell who leaves stuffed animal carnage wherever she goes. You'd think a big dog would be harder on toys, but that's not always true.

Little dogs have sharp pointy teeth. They can be destructive especially when anxious or bored. Don't be fooled. A small dog can do just as much damage as a large dog if you give them enough time.

I wonder if other small dog owners have the same problem? I hope it's not just Misha who puts her toys through the wringer.

Misha loves chasing tennis balls. But, regular sized tennis balls are too big for her to carry around. It's not a lot of fun for the catcher or the thrower when you dog can't pick up the ball.

These small sized balls are perfect for her small mouth. And, they squeak too!

The koala has stood the test of time. It's gone through two dogs and it still has its arms and legs. There are many animals in this collection including an elephant, lamb, and bunny. 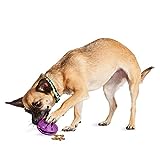 I bought the Busy Buddy Twist N' Treat hoping for a toy that would keep her busy. She had figured out most of her treat toys and needed another one that took longer than five minutes to empty.

The Busy Buddy dispenses treats out of two holes on opposite ends. It needs to be rolled or wobbled back and forth to work the treats out. You can adjust the size of the holes to make it more difficult.

Just look at the photo. This toy used to frustrate the heck out of Misha. It used to take her about 20 minutes to empty it. Notice that I said used to? She is very clever. It took her about a month before she figured out that the food comes out of the holes. It wasn't long after that that she solved it.

First, she picks up the Busy Buddy so that a hole faces downward. She shakes it and drops it making the treats fall out the hole. Then, she picks it up in her mouth and twists it open. Don't ask me how she does it. The toy is bigger than her head.

This is a good energy consuming toy. And, if your dog isn't as clever as mine, it should get hours and hours of enjoying from the Busy Buddy.

How many times has your dog driven you nuts and you wish they had something to occupy them for 15 minutes that just for 15 minutes? They can bug you a bit like a 5 year old some days. This is where a Kong Goodie Ball comes in handy.

This treat ball has a hole in the middle. The hole has ridges all through the inside. You take a soft treat and push it inside. It gets stuck in those ridges.

Your dog will spend several minutes trying to lick out the treat. It burns off a lot of excess energy especially in the evening when your dog is ready to play, but you aren't.

I call it the puppy pacifier. It can keep them busy with a safe toy. Dogs find this type of activity relaxing.

If your dog, big or small, really tears into their stuffed animals, the best thing to do is to select toys that have the least amount of body parts and attachments. This wooly man has no eyes, no ribbons, no tails to tear off. It's material is pretty tough and it's easy to sew up if a hole appears.

This is the worry free toy. There's nothing to pull off on this guy. These are safe for puppies, too.

Just because your dog is small don't assume that small toys are better. A small stuffed animal can be ripped apart quite easily.

Misha has toys of all sizes, but she prefers the big toys. Some of her toys are the same size as she is--or bigger. She drags them around by whatever body part she can latch onto.

Larger toys, for the most part, are harder to tear apart. They don't have small pieces that can be swallowed. Since they are intended for a larger dog, they survive a small dog much better.

What Not To Buy

If your dog is a chewer like mine, you may be making more trips to the Vets than you would like. Some dog toys are not meant for a dog that tears things up. They can be downright dangerous if parts are swallowed. It pays to do your research before you buy.

Don't buy any toy with that ribbons or strings sewed on. Your dog will chew those right off.

Be careful with rope toys. They may look sturdy, but rope can be chewed through. Braided rope can be unbraided by a clever dog like mine. A really clever dog can chew the rope into strings which can be swallowed, and at the very least, make a big mess on your carpet.

Avoid any toy with plastic parts added. Plastic eyes are a big no no.

Watch for the squeaker! Some dogs set out to kill the squeaker and will do anything to rip it out. Be sure you find the squeaker before they do. Some dogs that kill squeakers do perfectly find with grunting toys.

By keeping these things in mind, you'll set a safer environment for your dog.