There's a toy dog breed to fit every dog-loving home!

Small dogs are popular because they're versatile, wonderful pets who fit beautifully into your life. Whatever your lifestyle may be, there's a dog who will relish it and your company. If you want a dog, you can find your perfect pup!

The breeds included here are the members of the American Kennel Club's Toy Group - a diverse group with something for everyone! The descriptions are from the AKC Standard for each breed - written by those who love the breed.

The Affenpinscher is a balanced, wiry-haired terrier-like toy dog whose intelligence and demeanor make it a good house pet. Originating in Germany, the name Affenpinscher means, "monkey-like terrier." The breed was developed to rid the kitchens, granaries, and stables of rodents. In France the breed is described as the "Diablotin Moustachu" or moustached little devil. Both describe the appearance and attitude of this delightful breed. The total overall appearance of the Affenpinscher is more important than any individual characteristic. He is described as having a neat but shaggy appearance.

The Brussels Griffon is a toy dog, intelligent, alert, sturdy, with a thickset, short body, a smart carriage and set-up, attracting attention by an almost human expression.

The Cavalier King Charles Spaniel is an active, graceful, well-balanced toy spaniel, very gay and free in action; fearless and sporting in character, yet at the same time gentle and affectionate. It is this typical gay temperament, combined with true elegance and royal appearance which are of paramount importance in the breed. Natural appearance with no trimming, sculpting or artificial alteration is essential to breed type.

The Chihuahua is a graceful, alert, swift-moving little dog with saucy expression, compact, and with terrier-like qualities of temperament.

The Chinese Crested is a toy dog, fine-boned, elegant and graceful. The distinct varieties are born in the same litter. The Hairless with hair only on the head, tail and feet and the Powderpuff, completely covered with hair. The breed serves as a loving companion, playful and entertaining.

The English Toy Spaniel is a compact, cobby and essentially square toy dog possessed of a short-nosed, domed head, a merry and affectionate demeanor and a silky, flowing coat. His compact, sturdy body and charming temperament, together with his rounded head, lustrous dark eye, and well cushioned face, proclaim him a dog of distinction and character.

The Havanese is a small sturdy dog of immense charm. He is slightly longer than tall, and covered with a profuse mantle of untrimmed long, silky, wavy hair. His plumed tail is carried loosely curled over his rump. A native of Cuba, he has evolved over the centuries from the pampered lap-dog of the aristocracy into what he is today - the quintessential family pet of a people living on a small tropical island. His duties traditionally have been those of companion, watchdog, child's playmate and herder of the family poultry flock. His presentation in the show ring should reflect his function - always in excellent condition but never so elaborately coifed as to preclude an impromptu romp in the leaves, as his character is essentially playful rather than decorative.

The Italian Greyhound is very similar to the Greyhound, but much smaller and more slender in all proportions and of ideal elegance and grace.

The Japanese Chin is a small, well balanced, lively, aristocratic toy dog with a distinctive Oriental expression. It is light and stylish in action. The plumed tail is carried over the back, curving to either side. The coat is profuse, silky, soft and straight. The dog's outline presents a square appearance.

The Maltese is a toy dog covered from head to foot with a mantle of long, silky, white hair. He is gentle-mannered and affectionate, eager and sprightly in action, and, despite his size, possessed of the vigor needed for the satisfactory companion.

The Manchester Terrier is a small, black, short-coated dog with distinctive rich mahogany markings and a taper style tail. In structure the Manchester presents a sleek, sturdy, yet elegant look, and has a wedge-shaped, long and clean head with a keen, bright, alert expression. The smooth, compact, muscular body expresses great power and agility, enabling the Manchester to kill vermin and course small game

The Papillon is a small, friendly, elegant toy dog of fine-boned structure, light, dainty and of lively action; distinguished from other breeds by its beautiful butterfly-like ears.

The Pekingese is a well-balanced, compact dog of Chinese origin with a heavy front and lighter hindquarters. Its temperament is one of directness, independence and individuality. Its image is lionlike, implying courage, dignity, boldness and self-esteem rather than daintiness or delicacy.

The Pomeranian is a compact, short-backed, active toy dog. He has a soft, dense undercoat with a profuse harsh-textured outer coat. His heavily plumed tail is set high and lies flat on his back. He is alert in character, exhibits intelligence in expression, is buoyant in deportment, and is inquisitive by nature. The Pomeranian is cocky, commanding, and animated as he gaits. He is sound in composition and action.

The Poodle (Toy variety) is a very active, intelligent and elegant-appearing dog, squarely built, well proportioned, moving soundly and carrying himself proudly. Properly clipped in the traditional fashion and carefully groomed, the Poodle has about him an air of distinction and dignity peculiar to himself.

The Pug is decidedly square and cobby. A lean, leggy Pug and a dog with short legs and a long body are equally objectionable. The Pug should be multum in parvo, and this condensation (if the word may be used) is shown by compactness of form, well knit proportions, and hardness of developed muscle. Weight from 14 to 18 pounds (dog or bitch) desirable. Proportion square.

The Shih Tzu is a sturdy, lively, alert toy dog with long flowing double coat. Befitting his noble Chinese ancestry as a highly valued, prized companion and palace pet, the Shih Tzu is proud of bearing, has a distinctively arrogant carriage with head well up and tail curved over the back. Although there has always been considerable size variation, the Shih Tzu must be compact, solid, carrying good weight and substance.

Even though a toy dog, the Shih Tzu must be subject to the same requirements of soundness and structure prescribed for all breeds, and any deviation from the ideal described in the standard should be penalized to the extent of the deviation. Structural faults common to all breeds are as undesirable in the Shih Tzu as in any other breed, regardless of whether or not such faults are specifically mentioned in the standard.

The Silky Terrier is a true "toy terrier". He is moderately low set, slightly longer than tall, of refined bone structure, but of sufficient substance to suggest the ability to hunt and kill domestic rodents. His coat is silky in texture, parted from the stop to the tail and presents a well groomed but not sculptured appearance. His inquisitive nature and joy of life make him an ideal companion.

The Toy Fox Terrier is truly a toy and a terrier and both have influenced his personality and character. As a terrier, the Toy Fox Terrier possesses keen intelligence, courage, and animation. As a toy his is diminutive, and devoted with an endless abiding love for his master. The Toy Fox Terrier is a well-balanced Toy dog of athletic appearance displaying grace and agility in equal measure with strength and stamina. His lithe muscular body has a smooth elegant outline which conveys the impression of effortless movement and endless endurance. He is naturally well groomed, proud, animated, and alert. Characteristic traits are his elegant head, his short glossy and predominantly white coat, coupled with a predominantly solid head, and his short high-set tail.

The Yorkshire Terrier's appearance is that of a long-haired toy terrier whose blue and tan coat is parted on the face and from the base of the skull to the end of the tail and hangs evenly and quite straight down each side of body. The body is neat, compact and well proportioned. The dog's high head carriage and confident manner should give the appearance of vigor and self-importance. 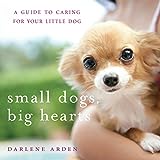