Odocoileus Virginianus in My Front Yard

I live in a rural county in North Carolina. My home office window overlooks hardwood forest and pasture land. Deer cross through my yard daily. Lately there has been one lone deer, a young buck just getting its antlers, that visits the front yard about an hour before dusk, nibbling grass and weeds and acorns under the oak trees. He wanders around back and forth for a few minutes then takes his leave back into the woods. I consider this visit a gift and look forward to it every day.

If you live in North Carolina you probably have seen wild whitetail deer even if you are a townie. I saw one cross the road at the post office in downtown just the other day. At last count the Tarheel State has over one million whitetail deer, so it is not surprising that we are well acquainted to the second largest game animal in the state (the black bear is the largest), especially when you factor in our encroachment of their natural habitat. It wasn’t always so - at the turn of the twentieth century deer numbered only a few thousand. In the 1950s a conservation program imported whitetails from other parts of the country and the population was successfully replenished.

Fawns Learn to Forage From Imitating Their Mothers

All About the Whitetail

The whitetail, aka the Virginia, deer is an ungulate, or hoofed mammal with a cloven, or two-toed hoof. The male has antlers, which are shed annually and then re-grown. The deer is reddish brown in summer, but its coat is gray in winter giving it better camouflage among gray tree trunks. I have seen a white deer on the farm on one occasion and another on another farm I rented several years ago. Not truly an albino, the deer on the horse farm had brown “tips” on its ears and muzzle, reminding me of a Siamese cat. The one I saw in my backyard at this present location was probably an albino. She was followed into the woods by a buck of normal color. I’ve not seen her again. Experts say these miss-colored deer do not survive for very long since predators, including human hunters, can easily see them. The whitetail gets its name because the underneath of its tail is white. When the deer senses danger it flags its tail as it runs away to warn herd-mates to scatter as well.

Deer are ruminants, their stomachs having four compartments. They are browsers, rather than grazers. Their long necks enable them to reach tree and shrub branches for the leaves, which provide a good part of their diet. They also eat acorns and nuts in the fall. After eating their fill, which takes about an hour or two, deer, like cows, chew their cud. Deer are also said to have a good sense of taste with a sweet tooth.

The large ears of the deer enable them to be very sensitive to sounds. A crack of a twig will put them on high alert. Their keen sense of smell helps them recognize one another, and find food. Eyesight is very sharp in detecting movement, but they may walk right into the line of a hunter’s fire if said hunter is very still.

Twins are Not Unusual

Habits of the Whitetail

The deer can run from 35 to 40 miles per hour and are excellent sprinters and jumpers. I have watched the deer on the farm jump the pasture fence from a standstill with ease. Deer are also good swimmers. When I lived in Plymouth, NC, on the banks of the Roanoke River, deer were known to swim the river and bound through town to escape hunters from the other side.

While running away is the deer’s first line of defense the male deer will use its antlers and hooves to fight if cornered with no escape. Females will like-wise use their hooves as defense in the same circumstances. But the male deer’s antlers are mainly used in sparring matches with other males to win breeding rights with the does.

The females travel in herds. The males are solitary, or stay in small groups, except during breeding season. Even when they are allowed in the herd an older doe is the alpha of the herd. My young buck seems to contradict this fact. he has stayed with a doe and her fawn all summer. I have even seen the buck and fawn together with the doe showing up a few minutes later. I suppose this young male is a yearling that is still staying near its mother. Fawns are born in May or June. Twins and even triplets are not unusual. They are spotted from birth until a few months of age to help them hide from predators. When they are old enough to join their mothers in foraging they learn eating and behavior by imitating.

The natural life span of the whitetail is fifteen to twenty years, but few live more that three years because of predators, disease and parasites. Humans are probably the largest threat to deer, either from hunters or automobiles. In 2004 North Carolinians reported 15,000 auto accidents that were caused by deer. I didn’t report my deer encounter with my pickup truck back in 1994. Chances are that a considerable number of deer hit and/or killed by automobiles go unreported. In North Carolina predators of deer are red wolves, coyotes, bear and mountain lions. Parasites, disease and extreme weather also take a certain toll on the whitetail deer.

Flag and Flee is the Deer's First Line of Defense

While I enjoy watching deer that visit here on the farm I do realize that well managed hunting in North Carolina is necessary to control the population, resulting in healthier herds. I don’t think I could ever be a hunter (although one never knows if times get hard enough) but I am not squeamish about eating venison from my hunter friends’ bounty. I cook it much the same way I do beef. I was given some tenderloin last winter that I cooked with rosemary, garlic, salt and pepper. I wrapped it partly thawed in aluminum foil and roasted it in the oven. I removed the foil the last few minutes to let the meat brown on top. The results were tender and very tasty.

Another friend gave me several packages of ground venison, which I have used the same way I would ground beef in my chili, meatballs, and spaghetti sauces. Venison is very lean and therefore low in fat, making it a healthier choice than most beef or pork. 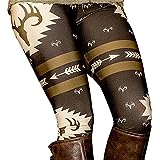