Domestic cats are currently the most popular pet in the world --- and they have been linked to humans as far back as 9,500 years ago. They are cute and cuddly, but they can also be deadly. Many people in my neighborhood allow their cats to wander out-of-doors without a second thought. Recent studies in the United States, Europe, and elsewhere in the world have shown that domestic cats can take an enormous toll on mammals, birds, and reptiles living around them. Baby birds that have just left their nests are especially at risk since they cannot fly well and often land on the ground.

Domestic cats are such a problem that the American Bird Conservancy has launched a program called Cats Indoors: A Campaign of American Bird Conservancy. This program falls under the eliminating threats to wild birds category. In this world of climate change and habitat destruction, birds already have enough obstacles to overcome. There is also the issue of keeping your cat safe and healthy, both of which are better accomplished indoors.

What can you do?

Do you own a cat?

Do you allow your cat(s) to go outdoors unsupervised?

How many birds and other animals do outdoor domestic cats kill?

Domestic cats are not native and are not part of "natural" ecosystems. However, they act as predators to native birds and other wildlife -- equivalent to or surpassing an invasive species. Indeed, the domestic cat may be the most prolific invasive species in the world. Many studies have been conducted in the United States and abroad in an attempt to measure just how many birds outdoor domestic cats can kill.

Because of abandoned and un-neutered cats, there are also millions of homeless cats in America today. These cats have no choice but to hunt wildlife in order to survive. However, ultimately we cannot blame cats for this issue - all the blame lies with people.

The following information has been paraphrased from the American Bird Conservancy website:

Exact numbers will never be known, but based on research it is estimated that cats kill HUNDREDS of MILLIONS (100,000,000's) of birds and over one BILLION (1,000,000,000+) small mammals (including rabbits, squirrels, and chipmunks) every year in the United States. University of Wisconsin ornithologist, Dr. Santley Temple estimates that 20-150 million songbirds are killed each year by rural cats in Wisconsin alone.

Both domestic cats that are allowed outdoors and stray/feral cats are considered feline predators by the American Bird Conservancy.

Cats compete with native predators and can often out-complete them because they have a stable food source and are not vulnerable to changes in prey density. Unlike native predators, domestic cats are often vaccinated and therefore are immune to common diseases. However, many unvaccinated cats spread diseases to wildlife.

Keeping your cat safe and healthy

Cats kept exclusively indoors most often live longer because they are exposed to fewer threats. Outdoors cats run the risk of contracting deadly diseases such as rabies, feline distemper, or feline immunodeficiency virus. Outdoor cats could be killed or injured by cars or by dogs and native predators like coyotes and owls. Many cats also get lost or are stolen or poisoned by ingesting chemicals / rat bait they find outside. Worms and other parasites can also become a problem if a cat is eating rodents.

Aside from keeping your cat safe, it is also courteous to keep your cat indoors. When you let your cat outside, it does not stay in your yard (unless of course, you have some kind of shelter). Your cat will end up wandering into other people's yards and becoming a problem. I have spoken to numerous fellow birders who have complained about cats sitting under their bird feeders and killing birds. Because many people do not bother to put ID tags on their cats, concerned neighbors do not know who to talk to about the issue. This can also be an issue with dogs and other animals, so please always remember to supervise your pets while they are outside. (Image: Wikimedia Commons)

1) Bells on collars do not prevent cats from killing birds.

3) A well-fed cat will kill birds because of its predatory instinct. Just because your cat does not bring you birds does not mean it is not killing them.

4) If your cat goes outdoors it is safe to assume it's killing and eating something.

What can we do?

First and foremost, keep your cat indoors and spread the word to other cat-owners you know. If you must let your cat outdoors, consider purchasing a cat enclosure to keep both your cat and wildlife safe. Domestic cats face many dangers if left outdoors unsupervised. Most importantly: make every attempt to keep your cats indoors during summer when baby birds are leaving the nest and most vulnerable. Unfortunately, this is the season when most cat owners allow their cats outdoors.

If you are unsure about whether to keep your cat indoors, please have a conversation with your veterinarian. 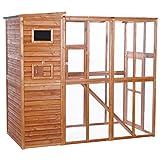 Prior to reading this page, did you have any idea cats were so harmful to wildlife?

Kitty Cams is a project being conducted by the National Geographic Society in conjunction with the University of Georgia. The aim of this study is to "spy" on outdoor cats in order to study / observe their behavior outside. Unfortunately, wildlife the recorded wildlife casualties are staggering. This study has found that on average the 60 cats with cameras killed one wild animal/bird every 17 hours spent outside and killed an average of 2.1 animals per week.

The study found that not all of the cats were killers, but those that did kill wildlife were quite proficient with their hunting. Please click here to read more about the Kitty Cams project.

This can be something of a controversial issue, but it is also an important conservation issue which every cat owner needs to consider and be aware of.

What is your opinion on cats being allowed outdoors?

I appreciate all of the contributions people have made to this page -- I value and respect reading other people's opinions on this subject. I just want to reiterate that there is nothing "natural" about allowing a NONNATIVE predator, such as a domestic cat, into the wild. There are many alternatives (such as play) that allow cats to develop hunting skills. Our native wildlife is already facing so many threats! ~Peace

Helpful Pages for More Reading - More information on this topic

According to the Kitty Cams project....

The cats in this study brought home less than 25% of the wildlife they killed. This shows that you really don't know about everything that your cat is killing -- it is only bringing home a small number of the animals it kills.

What will you do? - Image: Northern Cardinal (Wikimedia Commons)

Will you be keeping your cat(s) indoors from now on?

I am always open to suggestions and comments. I would like to know what you think of this issue and if you were aware of it before visiting.