An Artist's Day Out at Madras City, India

Growing up in a South-Eastern Asian Metropolitan city, where the coexistance of flavors, and color of people and man-made structures were quite evident. This modern city holds the polished remains of a western invasion, seeing several strong cultural festivals and rituals of various faiths living in harmony.

The bell-tower chimes from churches, like the temple chants and prayers from the mosque during the early hours, all remain close to my heart for these are the wake-up calls of a typical Indian city neighborhood.

This is about how I set out on a lone sketch trip, one lovely sunny day when I slipped into artist kits - with Levis on, my sketchpad, paintbrush and all, with a batik cap, riding myself to the middle of the hustle and bustle of the city. It is a melting pot of all kinds of people, rich and poor, on bicycles and cars, on buses and three-wheelers, on pavements and sidewalks. It is where the movement and mixture of colours never stop. I was elated to be at that spot where a historical monument (so to say), an evergreen subject for artists and photographers, waiting to be captured.

They call it the Madras Central Railway Terminus, as it looked in this sketch made in 1989 in the City of Madras. with its thousands of years of heritage, and Asia's second longest beach and a city seeing a transformation into a global hub today.

This magnificent British Building (which I was here to capture) has held this stature for more than a century and I was proud to have decided to sit right across this busy high road (as they refers to in a British influence English back in India) to get the best view of it. The structure was built during the British Rule in India and has become one of the few monuments left behind as footprints of the British before 15th August 1947, when India attained its Independence from the British. Hence I consider it an honor to rewrite this article and present it here on hubpages, which I released at artistreecrafts.com as a guest writer on the very day India was marking her Independence of freedom from the British Imperial rule. 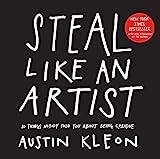 Steal Like an Artist: 10 Things Nobody Told You About Being Creative
Buy Now

As a citizen who has lived in this city for several years, I remember I have enjoyed the sight of this great red building, all so proudly standing, weathering the years that have rolled by, as we have gone about growing up, going to school and making our living around it. The building is open for business, 365 days a year with so many millions rushing in and rushing out as a vehicle which helps people fend for themselves.

On this day, I was even more over-whelmed for I got an opportunity to seat myself, right amongst the local people, very friendly flower vendors who made a living by just selling little jasmines, the blossoms spreading such fragrance, with a mind-numbing relaxation in spite of sitting in such a noisy locale with sounds of metal scraping when the mammoth city buses slam on their brakes. I couldn’t have asked for more of a luxury than the sights and fragrance of this setting with the modesty and hospitality offered by these street-side florists.

It is hard to believe that I actually got this once-in-a-life-time opportunity almost 25 years ago to setup my make-shift drawing venue all to myself, quite dazed and intoxicated by the welcoming gestures I received while I sat engrossed in my sketches, having some down-to-earth mouth-watering eats and hot snack-time beverages. This city, though cosmopolitan enough, the conservativeness intertwined with traditions made it still strange for many to see someone sit by the street and sketch. As it was a rare occurrence I was only greeted by amusement of passers-by and that made me feel a little bit timid and self-conscious. It was uncommon in South India especially in the 80s to see artists sketch by the streets. But this concern was not going to make me withdraw this opportunity to live as if in New York City at least for that day (wink!). Though it was a bit of a challenge, I loved the fact that I got to do it all without spending a paisa (Indian metaphor for a penny(UK) or a cent(USA), where many will have to pay so many dollars to get to do. Now, fighting my shyness, I just sat doing and finishing what I started which I am glad and will always be, when I write and rewrite, read and reread this experience for many more years to come.

At least I got off lightly, without being ridiculed as being insane. Thank heavens, I always loved deriving pleasure from simple things. And as I sat there amongst these flower vendors who spent their whole waken working lives, stitching together and making chains out of the natural scented fresh white flowers, I couldn't help thinking in awe what a rare chance I fell into.

I am pleased I got to experiencing this heritage in such close quarters. Jasmine flowers are used as adornments on the platted hair of Hindu women in South-east India and in different traditions in other parts of India too.

They consider it both auspicious and sacred while also complementing the beauty of the lady, clad in traditional clothes.

These instant friends I saw in these flower ladies was just about living a happy life, with their meager daily earnings, making ends meet one day at a time. In spite of these humble lifestyles, they offered me in luxury a box made of planks to sit on which was so valuable a gesture in such challenging living conditions.

I can’t stress enough about the situation being at the right spot, at the right time looking up at the grand, central station which stood there with its stiff upper-lip, still with the Indian loyalty, it’s silvery roofs reflecting the brilliant sunlight as if always looking forward to a new brilliant day. This 100 year old ‘Britisher’, deserved all that pride, withstanding harsh weathers of this coastal city along the Bay of Bengal, surviving catastrophes so devastating such as tsunamis and cyclones.

It was like getting two birds with one stone. One, to have the best outdoor sketch session an artist could have ever wish for and two, to part-take of a day in the life of some folks truly stricken by poverty physically, but as rich in the mind with a happiness that nobody may easily see.

This is the driving force of every human to move on in life, no matter what the challenges.

'Happiness with what they have".

At the end of the day I had so much gratitude for this gift they provided me with to take part in their day, so fragrant with the flowers and their warm hearts.

In spite of being struck by poverty, I saw that ray of hope and joy in their eyes which nobody else had, living just for that day. Keeping this in mind made be relish even more, every drop of the Indian tea they offered me as I knew that with every sip I took, it was from what they had earned from a hand-full of the flowers they had sold.

I was humbled by the way they welcomed me, with open arms as their guest.

Looking at my sketch today, I vividly remember, just like yesterday, those treasured moments, in the city where I was born, in just a blink. For, I had such a great time sketching while enjoying the florist friends’ innocent jokes.

When finally, I bid goodbye after the hot cup of tea, my heart felt so peaceful with the thought that these folks really helped me lighten up my spirit.

It was such a pleasant Summer day.

Now and again as I sit reminiscing the thought of my reddish-pink building done in watercolor, the red and pink tinge still afresh, as if saying ‘a thank you’ for recognizing its glamor.

The material I used for my original painting was a water-soaked, hand-dried, hand-made paper manufactured at The Auroville in the French Colony of Pondicherry in Southern India, making the quick-sketch using Staedler’s Mars Lumograph HB Sketching pencils, then splashing it with extremely thinned Indian Camlin water colours in layers using paint brushes such as Cotman III No. 3 & 7 from Winsor & Newton England.

After the painting had thoroughly dried, I gave it a gray sketchy outline and accents using calligraphic nibs dipped in diluted black watercolor paints.

The purpose of my painting trip was to make this an indigenous subject to gift one of my works to a long time fan of India. My original painting is gifted to him, living in another part of the globe who loves the colors, the food, the temperament of India and who wishes that if there is another life, he must be born Indian.

This is a recreation of that painting made just for this article, using Pentel watercolors and again, Winsor & Newton Paintbrushes.

20 years I would think is not a long time to let the details of how I made this piece, just fade away (smiles…) The fact that I was cradled in a fragrance of fresh flowers and warm hospitality keeps the memories all the more alive.

Salutes to you Madras City, the Chennai Pattinum of today!! Three cheers to the friendly people who are all the unseen heroes of what makes it a great city to get brought up in.

Stay tuned for another article. The same experience I had/am having in another City after exactly 25 years in 2014, a city very close to my heart, as vibrant, diverse and colorful as this one.