Artist Claude Monet was born on November 14, 1840 in Paris, France. He was the youngest son of Claude-Adolphe and Louise-Justine. In 1851, he attended Le Havre Secondary School of the Arts and made money on the side drawing charcoal caricatures. He also took drawing lessons from Jacques-Francois Orchard, a former student of the artists Jacques-Louis David. In 1856, Monet befriended the artist Eugene Boudin who became his mentor. He also met Edouard Manet around the same time.

Claude Monet joined the First Regiment of African Light Cavalry in 1861 but left in 1863 after contracting typhoid. He then studied with artists Charles Gleyre, who numbered among his students Renoir and Sisley. Along with these artists, Monet helped to promote the Impressionist style. His painting Impression: Sunrise is widely seen as the first Impressionist painting and responsible for the name of the movement.

In 1866, Monet’s Woman in the Green Dress was well received by the art critics. The painting features his future wife, Camille Doncieux whom he married in 1870. Their son Jean was born in 1868 and they welcomed a second son Michel in 1878. Camille died shortly after giving birth to Michel in 1879 of tuberculosis.

During the Franco-Prussian War in 1870, Monet moved to London where he studied artists such as Constable and Turner. He returned to France in 1871. After the death of his wife Camille, Monet and his sons lived with Alice Hoschede and her six children. They moved several times finally settling in Giverny in 1883. Monet and Hoschede married after the death of her husband in 1892; she died in 1911, followed by his son Jean in 1914.

While at Giverny, Monet created a beautiful garden that is still open to the public today. It is featured in many of his paintings.

By 1923, Monet was suffering from cataracts. Claude Monet died on December 5, 1926 of lung cancer.

The paintings of Monet are still popular today. In 2008, Le Bassin aux Nympheas sold for almost $74 million. His gardens in Giverny are visited by thousands of tourists every day. 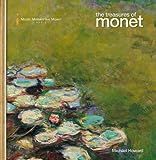 The Magic of Monet's Garden: His Planting Plans and Color Harmonies
Buy Now

Bridge over a Pond of Water Lilies 1899

Today as the news from Selma and Saigon
poisons the air like fallout,
I come again to see
the serene, great picture that I love.

Here space and time exist in light
the eye like the eye of faith believes.
The seen, the known
dissolve in iridescence, become
illusive flesh of light
that was not, was, forever is.

O light beheld as through refracting tears.
Here is the aura of that world
each of us has lost.
Here is the shadow of its joy.