Here goes my latest experiment. I had stitched a cute looking skirt and blouse for my kid, who is 2.5yrs old. There was some meters of cloth remaining, once I did my churidar. So I just thought, how I could work on that to make a dress for my sweetie. Just for fun... I haven't learned stitching and cutting from and technical person and hence this may contain issues. Anyway, I found this one really interesting and hope this might light up some ideas for you.

Anna in her Skirt and Blouse

Clicks through the process

Check My Hub - Princess Costume for My Kid

Now neck is marked and cut as circled portion. Piping for neck is given using darker shade cloth (picture 11-13). Now I had got two pieces of embroidery left, I had used the same separately in the front portion of the blouse. I had used the default embroidery option in my machine to do the cut work (picture 14-16). I had also used the build in embroidery in my sewing machine to have a strip of the darker shade towards the middle of the blouse (picture17-18).

The puffs in the hand is sewed separately and piping is done and later is joined to the body (picture 20-23). In the back portion of the blouse, slit is given, since the blouse will be tight enough and wont be able to wear it from the top. The slit in the back is given and hook and hole is given as in case of saree blouse (picture 24-25).

Don't miss reading On How to stitch an Anarkali Churidar

Now the Skirt and blouse is ready. all the measurements are taken in an approximate manner, using a long thin cloth itself. I'm sure that this is not the way to stitch , but this is just an experimentation of mine (picture 29).

Other stitching Hubs of mine 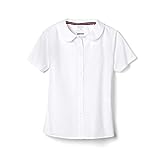