As a teacher at all levels and mother of five children, Bronwen has been interested in a variety of crafts for both children and adults.

Collecting grasses can be fun, it doesn't cost a thing except a little time and it's not difficult, either. When I want to make a new arrangement, I simply collect some stems of grasses that attract me as I walk my little dog. Although I live in a Melbourne suburb, it is surprising the variety that I can find. As the grasses grow their seed heads, I can collect a small bunch of different ones every few days until I have enough that are drying and ready to use in my arrangement.

You will notice that I do not know the botanical names of the grasses, but from my descriptions, you will probably be able to recognize some that I have used. Among them are common names such as

I find that some grasses are best dried flat, for example the shell grass. The heads are fairly heavy and if hung they may end up pointing upwards, rather than hanging down as they are in nature.

Other grasses can be tied with string or ribbon, or as I have done in the photograph below, simply with an elastic band. Sometimes, if I have a big bunch, I will hang it from a nail in the garage, but as the shivery grass is fine and dainty, I've just hung it from the laundry door.

Bunny tails are often dyed after they are dry and they can add to the variety of colour as well as the different shapes and textures in an arrangement. However, in my arrangement, the bunny tails have retained their natural colour. 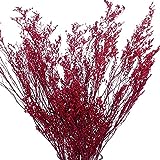 Adding Other Seeds for Variety

There are two reasons for adding other seed heads from the garden. In my arrangement I have added Honesty and Lavender, but there are many others that could be chose.

Most of the grasses dry to a pleasant autumnal pale brown; the Honesty adds a lovely silver sheen as well as the disc shape while the Lavender retains a darker colour. Both of these dry quite well hanging upside down.

After the Honesty is dry, the two outside shells of the seed-boxes need to be removed. As you do this, you can collect the seeds and save them to plant next season. The inside 'disc' has a lovely silvery sheen and is transparent (as honesty is!). Honesty will yield quite tall stems for your arrangement. Lavender can be tallish, too.

We each plucked a soldier that had a strong stem.

Then our soldiers would 'fight.'

We each took turns to hit the other person's soldier across the top of the stem near the seed-head, with our soldier's stem.

Eventually one of the soldiers would have his head chopped off, so the other was the winner. Fun! (And we were girls!)

Again, I am quite ignorant of the real name of these grasses, but the arrangement at the bottom of the article includes what we used to call Soldier Boys (see below) when we were children, and this has stuck ever since in our family. Soldier Boys dry well, although the brim of their hats is likely to disintegrate.

These weeds are found in so many nature strips and when the strips are not mown for a while the Soldier Boys can spring up quickly. They're such fun. They have fairly broad leaves that lie flattish on the ground and the strong thin stems shoot up, often so that they almost form a circle above the leaves. Because of this, we said that the leaves were the campfire and the soldiers stood tall around it.

Try this Quiz; it's simple

Have you ever made dried grass arrangements?

When the grasses are completely dry, and that only takes a couple of weeks, the stems will have stiffened and are ready to be arranged.

You may need to add some pebbles or marbles to the base of the vase; without water to weight it, the vase make become top-heavy if your arrangement is tall.

Dried grass arrangements are simple to make and can look attractive in different corners of a home. They have the advantage that they do not require water that needs frequent topping up - and they last all winter.

The next Spring you may want to gather more grasses to replace ones that have become dusty. Unless someone is allergic to grasses, they're very useful, as, unlike living plants, they also do not use up oxygen in a room at night. If you wish, some pot-pouri may be added inside the vase to add to the enjoyment of your arrangement.