Flowers make a great subject for a photo - they're naturally beautiful, and easy to find in the warmer months of the year. This article covers the top tips and techniques to get great photos when photographing flowers in their natural surroundings.

If you want your flower photos to stand out, try taking photos from different angles, such as looking up.

When taking natural flower photos, you will generally want to take the photo at slightly above eye level with the flower, while ensuring that the centre of the flower can be seen. This means you will probably need to crouch down. For smaller flowers you may even need to get the camera right down at ground level.

If the ground is wet you may find a cheap foam kneeling board (used when gardening) will help prevent your trousers / knees getting dirty. If your camera has a live-view function, this will help greatly when composing an image with the camera at ground level.

Isolate the flower from its surroundings

To help throw the background out of focus and isolate the flower, set your camera / lens to use a relatively large aperture (e.g. f/4) when taking the photo. If space permits, also try using a lens with a longer focal length, such as 200mm or 300mm, and taking the photo with the same framing, but from further away. This change in perspective compared to a photo taken closer with a shorter focal length helps to isolate the flower from the rest of the scene.

Use a diffuser if the light is harsh

Hold the diffuser between the sun and the flower, and you should see the reduction in harsh shadows and highlights on the flower.

You can buy commercially produced diffusers, like the Lastolite Trigrip, or make your own. To make your own diffuser you need some white translucent material, like an old T-shirt, plastic bag, or tissue paper. Stretch the material out over a frame, such as an old coat hanger bent into a diamond shape, and attach it securely.

For taking photos of flowers in their natural environment you will be best using natural light as your main light source, rather than flash. Natural light will generally give less harsh shadows than flash, and also ensure that the background behind the flower is lit well.

The best time of the day for flower photography is early morning or late afternoon. The light at these times will be warmer and less harsh than it is during the middle of the day. The wind also tends to be lower at the start and end of the day, so you are less likely to get the flower blowing about while you attempt to photograph it.

Depending on how well your flower is lit (e.g. if you're shooting a flower in woodland then it's probably relatively dark), then you may need to use a tripod to stabilise the camera. When placing the tripod though, be careful - you don't want to find the perfect flower and then knock all its petals off while trying to position your tripod!

For photographing flowers during the daytime, the best conditions are when the sun is shining through hazy cloud. The cloud helps diffuse the sunlight, making the shadows less harsh and so producing a better photo.

Use a reflector or fill-flash when necessary

As an alternative to a reflector, or in addition, you can use fill-flash to help light the flower and fill in dark shadows. Make sure you have your flash set at a relatively low power, as you only want the flash to contribute a small amount of light to the scene, not become the main light source. The actual power the flash should be set to will depend on how far the flash unit is from your subject. 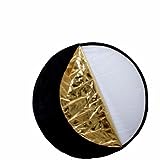 When you come across a large area covered with flowers, you'll most likely want to take a photo of the whole scene. Try to include some foreground, middle-ground, and background in your photo to create a sense of depth and scale. Try and use the rule of thirds and leading lines when composing the photo too.

If it is windy, set the camera to use a fast enough shutter speed to avoid the flowers coming out blurred. (Unless, of course, the painterly blurred look is what you're going for).

Flowers covered in early morning dew make an attractive photo. But if you don't get up early enough before the dew evaporates, you can create your own dew by spraying the flower with water from a misting bottle or spray bottle.

If your camera has a macro mode, or you have a DSLR with a macro lens, try getting in close and filling the frame with the flower.

Try getting really close to isolate just part of the flower. When focusing on only a very small part of a flower you can find some great abstract compositions.

When taking close-ups and macro photographs of flowers, you will probably need to use flash or long shutter speeds to ensure the flower is exposed properly. At these very close distances, flash will usually appear relatively soft, and more like natural light, especially if you are diffusing the flash as well.

Prevent the wind ruining your photo

A big problem when taking photos of flowers outside is that the flowers blow about in the wind. If the flower is constantly moving about this will cause problems in composing your photo. And it will also result in a blurry photo if your shutter speed is not high enough to freeze the motion of the moving flower.

One thing you can do to combat the wind is to set up a wind break between the flower and the wind. You don't need to use a full size wind break though! If you have a tripod and diffuser or reflector with you, you can place the tripod between the flower and the wind, and then rest the diffuser or reflector up against the tripod's legs. So long as you're not photographing a tall flower, this should act as a decent windbreak.

For small flowers even something relatively small, such as a backpack, should act as a decent wind-break.

Another thing you can do to prevent the flower moving about is to secure the flower using an accessory known as a plamp. This is a small bendable arm with clamps on both ends. The end with the large clamp clamps to your tripod leg, and the other end with a smaller, softer clamp, clamps onto the flower stem. This secures the flower and stops the flower blowing about in the wind.

The large majority of flowers have thin petals, making them look great when backlit. The light shines through the petals, giving them quite a different look to a standard front-lit flower photo.

Pay attention to the flower condition

There are exceptions to everything, but generally a photo of an undamaged flower will look much nicer than that of a damaged one with half the petals eaten or fallen off. If you are in an area where lots of the same sort of flowers are growing, take your time to check a few of the flowers and find the one that is in the best condition.

If you are photographing outside of your own garden, be careful what you are removing as you don't want to remove anything that looks like a common weed, but is actually a rare plant.